If humans were biologically immortal, but had an average lifespan of 100 years, what would the distribution of ages be?

Let's say that humans were biologically immortal. Once they reach adulthood, they effectively stop aging. Due to disease though, the average lifespan is 100 years. (In practice, your access to healthcare would have a huge effect on your lifespan, but we'll ignore that for the purpose of this question, since it would make it much more difficult to answer.) For ease of answering this question, we'll say that distribution of lifespans is exactly an exponential distribution with mean 100 years.

Additionally, humans have hit the carrying capacity of the Earth, and so only reproduce to replace those who died. In particular, we'll assume that some sort of steady-state has been reached.

My question is, given these constraints, what would be the distribution of ages be? Basically what I'm looking for is an equation or graph that tells you how many people are at a given age.

Note that I'm talking about the current age, not the lifespan.

Assuming that your population is stable and has not experienced any advancements in medicine in last 2000 years (assuming population of 1 billion, age of 1612 is moment when expected number of people drops below 1, so we can safely assume that no one survives to age of 2000), distribution of ages in population will look exactly like age of death distribution, just multiplied by population. For 7 billion, it's: $$ 7*10^7 e^{-\frac{x}{100}} $$ This is because you made some very simplifying assumptions, which you forgot to take to logical end. Making distributions of lifespans exponential you have de facto introduced yearly death rate (about 1%, because $\frac{e^{-\frac{1}{100}}}{100} \approx 0.99$), independent to anything. Infant has same chance to die next year as 1500 years old great$^{70}$grandfather (or 1000000 years old). Every single person has same chance to die per year. Every generation will shrink by fraction equal to chance of death. It also means that total number of deaths is constant and equal to size of population times chance of death, and as infants born to replenish population age, they die off each year in exactly same exponential way, year younger bracket is smaller by chance of death fraction and year older group is larger by chance of death fraction. Because of that, age distribution is exact same as lifespan distribution.

If there have been any changes in medicine that might have impacted lifespan (or rather yearly chance of death, because that metric is more useful in your population) or any wars and catastrophes that might have killed abnormally many people, there is insufficient data to provide answer; you have to define those advancements and/or wars/catastrophes.

Since you want an exact Exponential Distribution with a mean of 100, I just found an online calculator and put in it for you. Just multiply the Y Axis by your total population.

I know this might be viewed as a tongue in cheek answer but you did literally say we'll say that distribution of lifespans is exactly an exponential distribution with mean 100 years and In particular, we'll assume that some sort of steady-state has been reached. 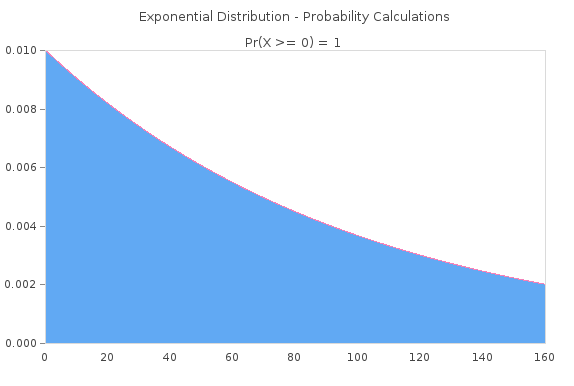 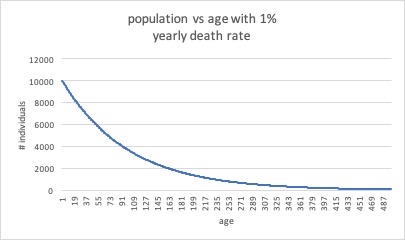 The average age of this population is 99. I did this in a way I could wrap my head around it, using excel.

Each year, the 1% that is subtracted from the population is a smaller amount. That gives you an asymptotic curve as in the diagram above.

I don't think there's enough information available to give a concrete answer to this. Maybe someone else can, but I don't think it's possible.

So much depends on things we don't know, such as how long this has been going on, and when/how this immortality began.

Here's what I mean: If this technology/magic were instituted immediately it means that, in general, we'd expect each person to die, a hundred years from their DOB. (As an average) If this took place in the modern U.S. the generations would be locked into rolling waves.

For example, according to wiki 1.8% of the population is 85 or older. Based on your criteria, when that generation dies, it is replaced with exactly the same number of new births.

So what happens is that the age distribution numbers are almost the same, but switch places. That 1.8% drops to the 'bottom' of the age distribution. 80-85 years later, the wave 'peaks' and what used to be 15-19 year olds at ~7% of the population are now all about 100 years old.

It won't be exact, but if that's close to how one scenario would play out. You'd have to remove the percentages of deaths that are from most 'natural causes' while keeping deaths by accident, contagious disease, homicide and suicide, you'd need some noise, and the math would be pretty granular, but stick to the general 'wave' pattern.

It takes effect by socioeconomic strata, or by state mandate, etc. And depending on how long this has been going on, given the admitted population controls, it could be literally anything you wanted it to be. A society could have it locked at 1% birth rate, every year, into eternity.

The first thing we have to look at is a population pyramid. Below is the 2015 pyramid from CIA world factbook data.

We currently have a hint of population growth at the bottom, then dropping off through to an upper limit of around 100. Median age of 30.4. (You've asked for average age rather than median age, this is far harder to calculate.)

Since you have stated a static population, with good healthcare in peacetime, the pyramid should be less of a pyramid and more of a column, starting to taper off where aggregate accident rates and incurable medical conditions start to kill people off.

A quick and dirty answer would be to extend the above pyramid age ranges 3fold, but of course this pyramid is limited by natural age limitations hence would not be valid.

The shape you're looking for is going to be a cumulative normal distribution of death rates rather than a clean exponential decay as others have suggested.

Lets say there a thousand humans (a really small earth). If we distributed them roughly across ages so they balance out at 100. I could have a:

That is the distribution you've described. Take your pick.

If you want something more realistic... (and grossly oversimplified).

Then lets consider mortality. Without aging doing any killing by itself, you'll find that we die purely from disease and accidents. This probably won't change the mortality rate very much. I'll draw some figures from Australian adult deaths. So roughly 0.0468% to 0.0782% of the population dies due to something.

That's about 46-78 dead humans a year (in our thousand human population). So about that many births per year.

and because of the small population cap, 51 people are executed at random. But if you raised it, to something more manageable, you'll see that this roughly makes a flat population that will slowly taper out (at the rate of a 5 hundredths of a percent).

Lets see what this population looks like, but with no ritualised forced deaths, and every member living till natural causes (like accidents) kill them. Lets also keep that median straight on top of 100 (roughly speaking).

This is represents two triangles and a rectangle like:

29 people isn't a satisfying population. Its an almost extinct one. Lets take the approximately 7 billion people alive today, and give them a shot of immortality. and institute the replacement only birth rate, with the constant death rate of 0.0005. (Lets say immortality makes people more adventurous and take on risks, without learning much about avoiding them). Fast forward many years and allow the natural randomness to even out a little, (so that I can use the simple triangle model and ignore every other event).

So natural causes gives the oldest person at about 5.3 million years old. Most people would have "accidentally" died by now.

Also there are around 2645 new infants born every year. This means a mere 6 average-large sized schools of each level of education are sufficient for educating the entire population. Imagine that, overnight most of the worlds schools can just be shutdown. Of course there will now be a large upswing in golf-course requirements.

Not the answer you're looking for? Browse other questions tagged science-based immortality life or ask your own question.

7
Immortality at the cost of vastly increased cancer risk
24
How could an immortal organism avoid cancer?
3
Can you achieve biological immortality for all newborns?
22
How would an immortal hide his/her immortality or maintain it publicly?
33
Should immortal women have periods?
27
How could immortal children age faster than immortal adults?
9
Why are all my replica super soldiers young adults or old teenagers?
3
Biological Explanations for Aging Stopping in a 100% Human Being
16
Minimal lifespan of a species for civilization to arise