The chemistry of a long living (alien) animal

I would like to have in my story an animal alien species with a long lifespan. By 'long' let's assume an average lifespan of 7000 (Earth) years to give a rough idea. Would be nice to give a scientific basis to justify it.

Considerations: (for brevity am going to name this lifeform 'IT')

Question: what chemistry would justify such a long lifespan best?

What I found out so far:
Aging and lifespan are two different aspects and not all the factors are well understood. What makes beings age? What gives them a longer lifespan?

Aging is a global decline of physiological functions, leading to an increased susceptibility to diseases and ultimately death. Maximum lifespans differ up to 200-fold between mammalian species.

Aging is a complex and barely understood process. While some animals have lifespans of centuries, others live for mere months. It is unclear why.

We know that what we call aging involves multiple cross-linked systems. Here's De Grey's breakdown of different types of aging damage from SENS:

and from: BBC - the tricks that help some animals live for centuries

Indeed, one of the most deeply-entrenched ideas about animal lifespan is that it is closely linked to metabolic rate – or the speed of chemical reactions that break food down into energy and produce compounds needed by cells. The notion that animals undergo cumulative damage and die sooner when they work harder like machines run at full capacity probably dates back to the Industrial Revolution.

In fact, the idea that the more oxygen an animal consumes, the greater the production of free radicals that cause damage, and therefore the swifter the ageing, is now outdated. That is thanks to more detailed studies of mitochondria, the parts of cells that generate energy.

So this suggests that IT should not need to be slow in order to live a long life.
Another aspect of long living is defense against DNA damage (including cancer).

In a study published in 2013, Magalhães and colleague Yang Li compared the genomes of pairs of similar mammals with both significantly different maximum lifespans and similar lifespans. They found that genes involved in response to DNA damage and the recycling of proteins by cells had evolved more rapidly in longer-lived species.

In 2015, he went on to lead a group that sequenced the genome of the bowhead whale, revealing species-specific mutations in genes linked to DNA damage response, the regulation of cell cycles and the control of cancer.

In 2015, a team led by Joshua Schiffman, of the University of Utah, calculated that fewer than 5% of captive elephants die from cancers, compared to a cancer mortality rate of 11-25% in humans. When they looked at data from sequencing studies, they found the African elephant has 40 copies of the gene that encodes p53 – a protein that plays a key anti-cancer role, by either preventing cells with damaged DNA from dividing until repairs have been performed, or triggering them to commit suicide. Asian elephants have 30 to 40 copies. Both humans and the rock hyrax, elephants' closest living relative, have just two copies of the gene.

These mechanisms can be summarized in the following diagram: 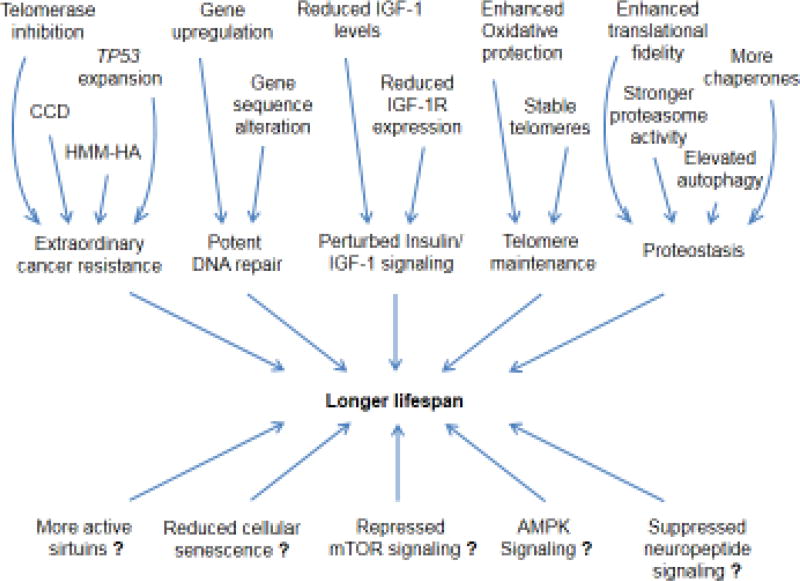 Of course IT may not be based on DNA. Nevertheless it will have a molecule or group of molecules used for cellular replication. Thus it will have to face challenges similar to DNA based creatures.

While here is an overview of the relation between body size, energy metabolism and lifespan.
The main two theories in modern times being the rate of living theory (ROLT) and the free-radical theory (FRT) While there is no definitive proof

So I wonder: this process is undoubtedly valuable for animals that are competing for survival. But maybe a lab constructed lifeform could be built on a different basis. A biochemistry that may yield lower ATP but with the advantage of a longer overall lifespan for the organism. I understand xenobiologists don't abound on SE. Am not looking for hard science though, just some plausible explanation.

One possibility is that this creature isn't an oxygen-breather at all. There are several other gases and liquids, such as chlorine, that have been proposed as a possible "breathing medium" for extraterrestrial life. If this entity isn't using oxygen, the free-radicals problem vanishes.

Another possibility is that it's something along the lines of a clonal colony. In this setup, a sessile organism sends out shoots which develop into duplicates of itself, connected by a root system. There's no apparent upper limit on size, and the survival of the colony isn't dependent on any one clone. In plants such as trees and grasses, they can keep going for tens of thousands of years.

My idea is that it has an enzyme that repairs telomeres to the point where it can have an seven-thousand-year lifespan. And possibly an impressive healing factor, as aging is the result of damage culminating over time. If we are to slow down the damage, we extend the lifespan.

Not the answer you're looking for? Browse other questions tagged science-based biology xenobiology .

5
How can a molecule grant long-life?

9
Could someone survive if all the DNA inside his cells got damaged? For how long?
14
How to Make Elvish Immortality Biological
9
What Disease(s) could Kill an Immortal?
4
Keplerian Life Cycle: Old age
4
Humans with longer-lived cells
3
A plausable explanation of how life is created with digital DNA
5
A sound reason for vampires to be weak to sunlight?
5
What is the optimal rate of mutation (for evolution)?
6
Near-biological immortality and cancer immunity via repurposing telomeres