How far can a human see?

I'm asking this question as a reference for use in worldbuilding when developing world size, atmospheric content, or alien optometric abilities (aka, vision).

While I'm specifically asking two questions, their relevance is so close that it's more practical to ask them once, together.

How far away can that sphere be...

B) In space as in (A), but assuming for the purposes of this question, that space is filled with an aether in all ways equivalent to Earth's atmosphere at sea level?

And still be seen (even if its shape cannot be clearly distinguished, i.e., a "point") by the average human eye?

1. I understand that eye sensitivity to light and focus vary between people. I don't know how to specify the "average." If someone can provide metrics that would clarify this issue, please leave a comment and I'll add them into the question.

2. For the purpose of this question, please ignore the lack of ground. I understand that light reflecting from surfaces between the oberserver and the observed will contribute (substantially, I suspect) to whether or not an object can be seen at a distance. I could be wrong, but I believe the basic setup I've proposed represents a best-case scenario.

3. For the purpose of this question, please ignore the fact that the sun isn't above the observer. In other words, it's shining from behind the observer rather than above or on top of the observer. This effects the amount of Rayleigh Scattering that would also contribute to visibility. Once again, I suspect this makes the setup a best-case scenario.

4. Ignore the fact that our hapless observer is sans-spacesuit. In other words, there's nothing about his/her environment as the observer that's affecting his/her vision (no faceplate). Lucky dude, as otherwise the eyes would have a bit of trouble in the vacuum of space.

5. The atmosphere between the oberver and the observed is uniform. This is different from the conditions of a planet (convex) or the inner surface of a Dyson sphere or ringworld (concave) where the atmosphere density is not uniform along the sight path.

6. Please ignore the field of stars (assume they aren't there). This isn't a test of how well a human can identify one tiny mote from a field of tiny, shining motes.

Please note that there may be a considerable difference between the sun behind the observer and the sun above and midway between the observer and the observed as the reflection off the sphere may (may...) be greater in the later case. However, it would only be greater on the top half of the sphere (closest to the sun) while it would be lower on the bottom half (and all the Rayleigh scattering issues come into play... and the sun's in your eyes...). At this time, I'm thinking that placing the light source behind the observer produces the highest reflectivity and lowest optical distortion for the greatest distance. If the math says I'm wrong, please let me know.

Your alignment of the sun, the observer (in space), and the object is as so

An issue here is that luminosity is a full spectrum measure of energy output, but we are only interested in energy from the visible spectrum. Since I can't find a visual spectrum only luminosity for the sun to do an energy calculation, we can use the absolute magnitude of the moon (+0.25) as our starting point.

We must adjust the magnitude of the moon by four factors; as each of these factors increases, the object will be relatively dimmer:

The distances are straightforward, and are calculated in terms of AU; the moon is roughly 0.00257 AU from Earth. The surface areas of the moon and object are proportional to the radii squared. The object has a radius of 5 km, while the moon is 1738 km. The albedo of the moon is a paltry 0.12, while the object is an incandescent 0.70.

We get the following equation for apparent visual magnitude of the object:

How far away can we see this object?

I take the above equation and, for values of r in AU, plot the apparent magnitude of the object on log scale. 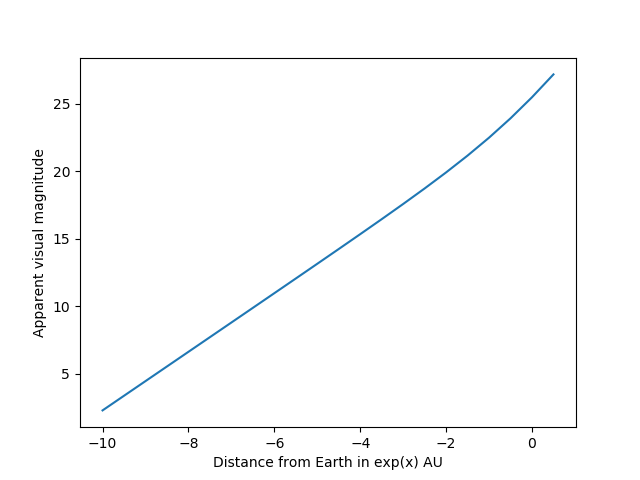 The code is here:

In aviation, part of the daily forecast is the estimation of unobstructed visibility. Obviously at a reasonable altitude, the curvature of the earth is no longer a factor, so physical obstructions, including fog and clouds are generally the obstructions. 10 statute miles is the maximum value for a clear day. I have never seen a value greater than this. It would be a good starting point.

8
Could Pluto/Charon support an atmosphere between them?
9
What is the color of the sky in a hollow earth?
0
Conditional deniability of a natural asteroid belt with an atmosphere?
7
Possible sky colors compatible with life on earth
4
Can a Sunset Be Black (Infrared)?
4
What colour would a flat world's sky be?
7
How far could you see the Andes from the Pacific on a flat Earth?
4
What would the atmosphere of the Archaean Earth look like? (Before massive oxygenation)
4
How plausible is this planetary system with binary stars?
10
Weather processes on a flat world