What would the atmosphere of the Archaean Earth look like? (Before massive oxygenation)

I am designing an exoplanet in the Alpha Centauri system that is remarkably like ancient Earth before photosynthetic life developed and proliferated oxygen into the air.

For Archaean Earth's atmosphere, most sites list elements of the atmosphere without any estimate on percentages. This is the only site where I could find a general composition estimate.

I see a composition that is roughly 70% N, 10% CO2, 10% CH4, and 10% H2O vapor.
Assume everything except atmospheric oxygen is Earth-like, for clarity. If you'd like, you can factor in the α Centauri A star's differences from our Sun, which I have compared basic stats with in another question here, though it seems they are remarkably similar.

What would this Archean Earth-like atmosphere that lacks free oxygen look like to human eyes?

This is for a hard sci fi PC first person RPG game, so visuals and animations/movement are very important.

I searched this site, and have not found a possible duplicate question concerning this type of atmosphere, only vastly different compositions such as methane or ammonia dominant ones.

-edited to remove subquestions and add the following:

I have read about Rayleigh scattering, but was left confused about this part concerning our modern sky with 21% O2:

In addition the oxygen in the Earth's atmosphere absorbs wavelengths at the edge of the ultra-violet region of the spectrum. The resulting color, which appears like a pale blue, actually is a mixture of all the scattered colors, mainly blue and green. Conversely, glancing toward the sun, the colors that were not scattered away — the longer wavelengths such as red and yellow light — are directly visible, giving the sun itself a slightly yellowish hue. Viewed from space, however, the sky is black and the sun is white...

... Some of the scattering can also be from sulfate particles. For years after large Plinian eruptions, the blue cast of the sky is notably brightened by the persistent sulfate load of the stratospheric gases.

If O2 can cause so many color effects, I am having trouble imagining what the skies would appear like without O2, from the surface or space.

This site, xenology.info, has a lot of relevant info, such as pressure and temperature effects:

"the amount of light scattered is directly proportional to the atmospheric pressure, and inversely proportional to the temperature.1994 So if we double the pressure we double the amount of light scattered in all colors -- and the sky gets brighter generally. Doubling the temperature has the opposite effect: the intensity of scattering is cut in half."

But the site also makes me less certain. For example, while it says most Rayleigh scattering should give a base of blue to sky colors, it also goes on to explain that some gases can alter the colors, such as how fluorine appears pale yellow. Chlorine appears green. Deep ozone would probably appear reddish. Methane and ammonia provide blue-green.

"If sulfur vapor is available, the air would alter color dramatically with large temperature changes. Near the boiling point at 720 K the sulfur sky would be dark yellow; as the temperature climbed to 770 K the atmosphere would turn a deep red, returning to straw yellow at about 1120 K". And "if the partial pressures of any of the aforementioned gaseous absorbers exceeds perhaps 0.001-0.01 atm, no light of any color will be able to reach the surface of the planet from the outside."

When it says nitrogen dioxide appears orange-brown, I don't think I can assume just because Archaean skies are 70% N that they are mostly orange-brown, because our modern sky is 78% N.

Mie's theory seems helpful, in that hazy or dusty skies would tend towards gray to white... but does not explain the color between Rayleigh's blue scattering and the Mie greys.

The Mie theory explains the behavior of atmospheres containing particles larger than about 4 microns. Above this critical size all frequencies of light are equally scattered, and the result is a gray or white sky. (Since there is always plenty of particulate matter, water haze and industrial pollutants floating around in the air -- perhaps 100-1000 kg over each square kilometer -- the sky’s sharp natural blueness is washed out unless we move to higher altitudes.)

Dust particles are discussed as lending their color to the lower atmosphere when kicked up, which is easily understandable to me. Such as why dusty low pressure Martian skies are similar colors to their landforms. I'm more concerned with atmospheric colors before dust gets involved.

Perhaps I can safely assume that such similarities to our current Earth atmosphere will produce a similar blue sky, but I am not finding the exact effects of an absence of oxygen...

EDIT: This answer was posted before the present edit to the question. I encourage everyone to answer the current edit.

A couple of years ago I read an article about Rayleigh scattering, which is what causes the sky to look blue from the surface of the Earth. What the article said was that all elements that are gaseous at human-living-tolerances scatter blue. That's your base color, it's irrelevant what combinations of gasses you choose. If there is a color shift it's due to the presence of dust and/or fluid that reflect/refract different wavelengths of light.

It's important to understand that you need enough light and enough atmosphere for Rayleigh scattering to even happen. The atmosphere of Mars is so thin that you can see stars during the day. There is almost no visible Rayleigh scattering on Mars (but when it can be seen due to low dust conditions... it's blue...). Knowing this, you'll see different shades of blue due to different atmospheric pressures or depending on exactly what angle you're looking through.

It's also incredibly important that you realize that we see blue mostly due to our eyes. The wavelength scattered by Rayleigh scattering is actually violet — but our eyes aren't designed to see it that way.

We see the blue because we're on one side and the Sun is on the other (so to speak), which is why from space you can't see the "color" of the atmosphere — it's transparent. (It might be blue at the edges of the sphere where enough atmosphere could scatter color and be visible from space, but there's so much blue-colored water that it might not be detectable.) Image courtesy Nasa. 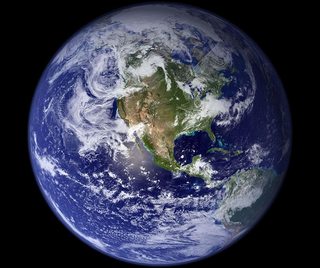 Next, ignoring contaminants like dust and fluid vapor, the only shift in color (mostly minor, the base is always blue) would come from sunlight (see here).

On re-entry, the sky below you is transparent and the sky above you is initially transparent slowly becoming blue as you descend far enough for Rayleigh scattering to matter — if you see any of this at all. Most of the time you'll be looking at the orange of burning stuff as you exchange speed for heat. Note that if you've ever been on a long-distance flight (where the plane gets 6+ miles into the air) you can see what I'm talking about. Directly below you the atmosphere is transparent. As you look out across the world, it appears more and more blue due to increasing atmosphere between you and the terminus of the atmosphere.

Rayleigh scattering needs sufficient sunlight to occur, which is why you don't see the blue immediately before sunset or after sunrise. I wasn't as clear about one point as I should have been, so: atmosphere has no intrinsic color, which is why you don't see any color at night and you wouldn't under your circumstances, either. What color you see at sunrise and sunset has more to do with clouds and the color of your star than the atmosphere, and it has (if I remember correctly) more to do with atmospheric lensing than it does Rayleigh scattering.

Visiual effects on all those items... none other than what you see on Earth today due to the previous explanations.

#6 [referring to an original question about climate] is unanswerable. Climate is horrifically complex and changing just one variable like the composition ratios of various gasses probably isn't enough to really change anything. Storms are caused by planetary rotation and orbit, sun energy output, the ebb and flow of pressure in the atmosphere, the presence (and ability to retain) moisture, temperatures all over the place... like I said, it's incredibly complex. As I said, I wouldn't expect your change in ratios to really affect anything at all.

Finally, it's unlikely there are any artists conceptions of the sky from either the surface or space at that time. If there happened to be one, I'd question it's presentation of reality. For as much as we know about the Archaean time period... we really don't know that much about it.

Not the answer you're looking for? Browse other questions tagged science-based planets space atmosphere weather .

33
Terrestrial Exoplanet Skies – I've Built a Visual Sky Chart. Is it Correct?
3
Is this fictional habitable exoplanet of Alpha Centauri A realistic?

19
Apparent Color of the Sun and Sky
9
What is the color of the sky in a hollow earth?
4
What would the air on a planet look like if it had a mostly methane atmosphere?
33
Terrestrial Exoplanet Skies – I've Built a Visual Sky Chart. Is it Correct?
7
Possible sky colors compatible with life on earth
6
Would there be Rayleigh scattering in an atmosphere of sulfur dioxide?
2
How much neon would need to be in an Earth-like atmosphere to tint it considerably orange/red?
16
What would be the appearance and color of a deep, pure and vast liquid CO₂ ocean as viewed from space (ignoring the atmosphere's influence)?