I've tried to write up a few new styles of swordsmanship for a story I've been planning. I've got a lot of mileage from different sword types and techniques, but have one idea that I can't find any real world evidence of.

Basically there is at least one school of swordplay that uses ankle length dresses as part of its fighting attire. The idea is that the dress obscures the movements of their legs, making them just a little bit harder to predict in terms of movement and attack.

While this seems fairly plausable to me, I can't find any historical accounts of anything like these combat dresses. So I decided to come here for some feedback.

Does the idea of dresses for dueling make enough sense to include in a setting, if not as a logical idea than as a gimmick a school could use to stand out, or am I completely wrong here? Any evidence I couldn't find would be appreciated, but I perfectly fine with some well informed opinions as well.

First off, as has been pointed out in at least one other answer, if you're watching your opponents leg movements, you're approaching combat wrong. Your eyes should be on their weapon, period. The one possible exception is if your opponent attacks primarily with kicks, in which case watching their legs is watching their weapon. As such, unless your style involves a lot of leg based attacks (not likely because of the next issue), it probably won't have much benefit for what you want.

There's another issue though. It's pretty hard to get your legs tangled up in pants. It's not very hard to do so in a dress or skirt. This means you have to pay a lot more attention to how you are moving, which distracts you from paying attention to your opponent.

There are a couple of potential benefits though:

Seems like a gimmick. When fencing you should keep your eyes on your opponent's sword, not their feet. Watch their feet and you are asking for a stab between the eyes.

The only thing that comes close is cloak and dagger fencing. From Wikipedia:

The purpose of the cloak was to obscure the presence or movement of the dagger, to provide minor protection from slashes, to restrict the movement of the opponent's weapon, and to provide a distraction. Fencing master Achille Marozzo taught and wrote about this method of combat in his book, Opera Nova. Fighting this way was not necessarily seen as a first choice of weapons, but may have become a necessity in situations of self-defense if one were not carrying a sword, with the cloak being a common garment of the times that could be pressed into use as a defensive aid. Both Marozzo and other masters such as Di Grassi also taught the use of the cloak with the rapier.

So maybe you want to focus on the upper part of the dress, not the lower one.

In Kendo sword fighting you wear very loose pants that look like skirts. 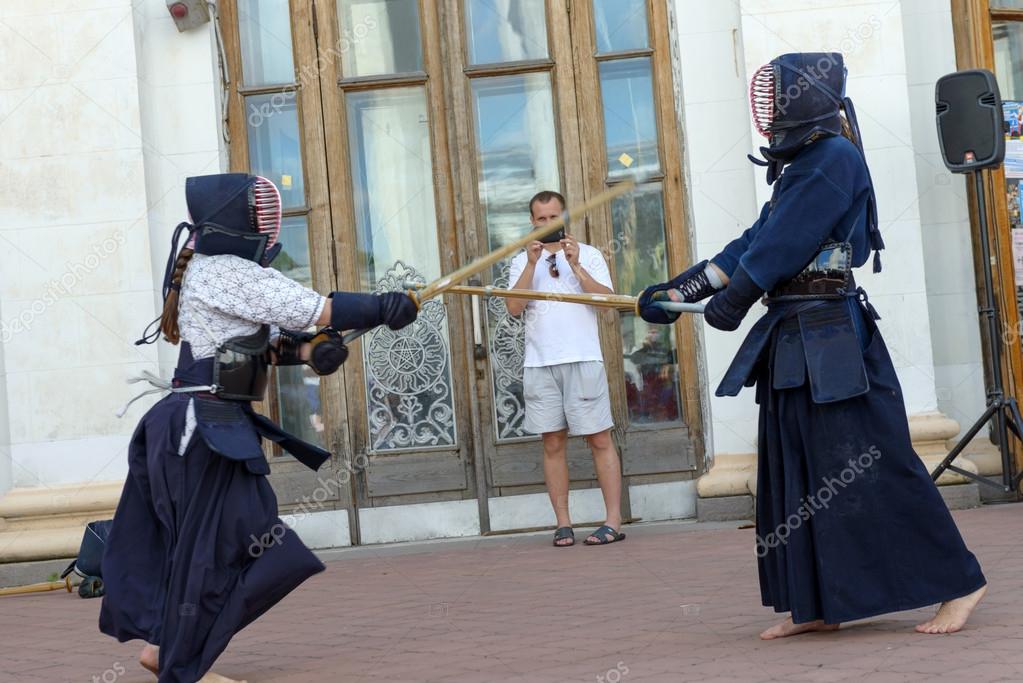 Scottish sword fighters traditionally wore kilts because they gave more freedom of movement. The seams of most pants do ultimately put a limit on how far one can move, a sufficiently pleated kilt does not. I believe Roman soldiers also used armoured skirts for a similar reason, armoured pants can be difficult to make, and hard to move in.

It makes sense with one caveat: Dresses move. You can still get an idea of leg position by watching a dress. If the goal is to obscure legs and leg movement, the dress would likely have some boning. It might include something like a rigid hoop that ensures the dress holds its shape, rather than defining the body underneath it.

Not the answer you're looking for? Browse other questions tagged combat clothing organizations .

4
How to organize the command structure and payment for Adventurer coalitions?
0
Are amnesiatic drugs the most effective way for a secret organization to remain secret if they get found out?
6
Surface Clothing for Merfolk
23
Best fighting style for a pacifist
7
Footwear for cat-people
5
How would clothes be created for an easy put on/take out in the middle of combat?