Underwater, merfolk see no need for clothing. It just slows them down, and the material that they need for it is expensive and hard to get. On the surface, however, the humanoids find their nudity distasteful and offensive. To avoid conflict, the merfolk have agreed to cover up when they're in surface cities.

The only problem is how to design it.

What would the clothing look like, and how would it be designed to avoid drag and weight underwater?

You say drag is not too much of an issue, but as a swimmer I find that hard to believe. Drag is everything in the water. 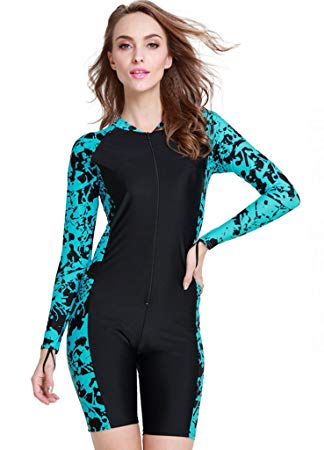 That covers all of your primary modesty concerns. In fact, it's rather on the way towards a burkini, which was explicitly designed to meet the modesty concerns of Muslim cultures while still providing acceptable swimming capabilities.

Beyond that, any additional "frills" to cover up particular parts of the body could be added on as your culture sees fit. Cultural dress is a tremendously complicated topic. If your culture demands an elaborate poofy structure on the left shoulder of all unmarried women, add it at your leisure!

Recently there was a bit of controversy in IRL swimming competitions about the usage of "sharkskin" wetsuits - ultra-low drag material that was claimed gave an unfair advantage to swimmers. Eventually regulations were passed governing the type of swimwear material that could be used.

This technology could be adapted by your merfolk for their clothing, to minimise drag and reduce the impact of having to cater to the silly humanoid sensibilities. To fulfil your coverage requirements, a simple long vest, or wetsuit with joined legs would suffice. Various colouring and patterns could then be applied for decoration.

Various dry-bag solutions exist if any of your merfolk want to carry the latest electronic gadgets with them underwater.

Clothing is not the speciality of the merfolk. While nudity is still illegal in some parts of the underwater city, most merfolk see it as just something to be accepted into human society for the most part, and nothing more. Therefore practicality is the focus here.

In order to be accepted into the city, they must be covered decently, and that's it. A merfolk isn't going to go through the hassle of buying human clothes, also considering paying money for something they don't need except as a ticket into the city is a waste of money, not to mention the clothes aren't designed for underwater travel so they'd be quickly discarded.

They want something cheap that does the job and isn't going to be a hamper on them later when they swim in the water. They choose kelp. Kelp grows abundantly in the oceans and its fibers are tough and resistant in water. When they dry, they keep their form and could even pass as a sort of low-quality leather material which could resemble shabby clothes.

The kelp leaves are woven together in such a way as to use the stem of the leaf, since anywhere else would tear with strong currents of the water while swimming. They only focus on covering enough as well, so most merfolk would probably not even bother with covering their limbs or head.

And the best advantage is that the kelp leaves would cling to them while they swim, as to not create serious drag in the water, unlike human clothes. The kelp leaves survive quite well without being attached to the plant, and if the merfolk swim in water often, the leaves are also continually kept watered. However the leaves would eventually die and wither away, so the merfolk would need to continually renew their dress often.

This wouldn't be problematic though, as the amount of work put into creating a wearable garb is minimal, and sold outside most gates by merfolk themselves before entry into the city.

That said, merfolk would stink. This means they probably would still be rejected from the higher part of the city housing the nobility. That said, most things in the city would stink, so the coin of the merfolk would still be accepted in most other institutions. In order for a merfolk to be represented in court, he or she would likely have to wear clothes best suited for a nobleman's child and wear plenty of perfume. 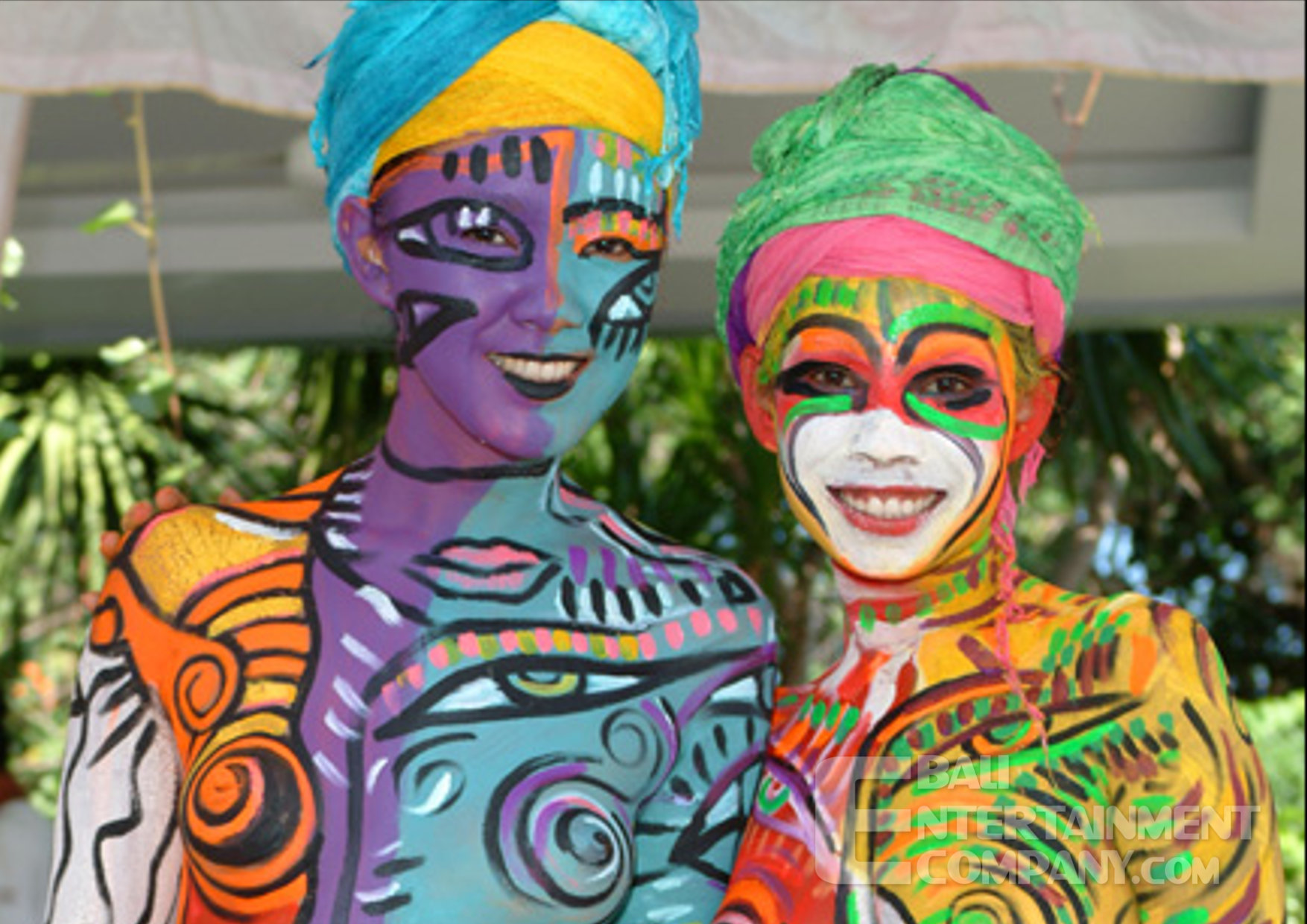 1: It can be carried in a small jar; minimal bulk.

2: It can be applied and reapplied as needed.

3: The paint merfolk use is water resistant. It will eventually wash or wear off but it is good for a few hours in the water.

4: No drag while swimming.

5: Merfolk appreciate their own contours. Body paint disguises but does not entirely conceal.

6: Nonhumanoid aspects of the body are equally well addressed by body paint.

As it has been mentioned before, there are standard materials for the clothes that can work underwater with little drag. The "style" part of the question is where the differences are more interesting.
Merfolks need to move freely underwater, so I imagine the clothes must be modest (without bulky elements or ornaments causing drag) and tight. But at the same time, they need to show the specialness of the occasion. For example, if they go to a business meeting, they need an elegant tight suit alike the suits human wear. I imagine something like this: 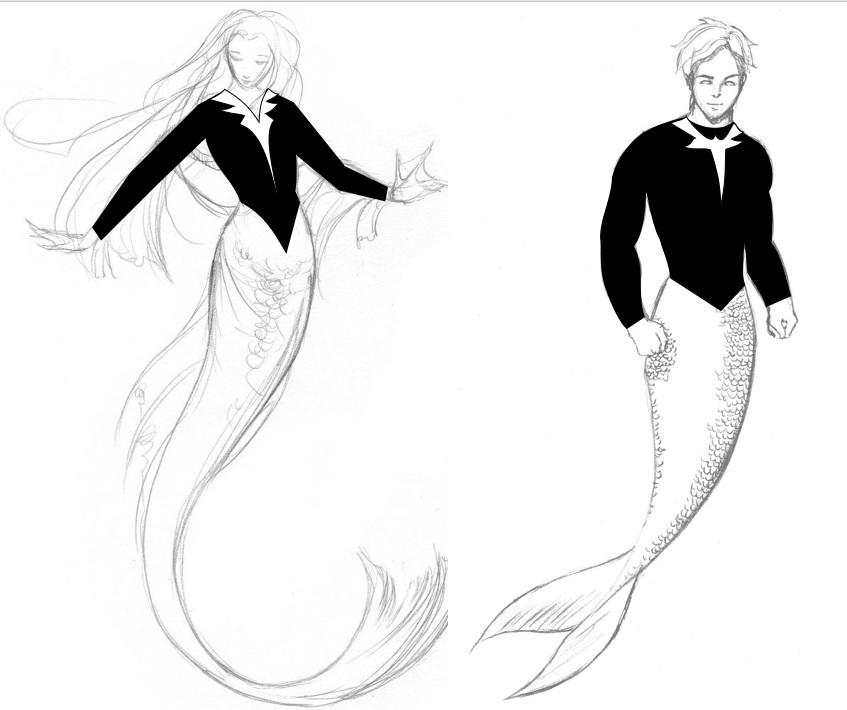 And for everyday living, I imagine they could use designs that represent the color patterns underwater, or based on some aquatic animal they like (a jellyfish in the left, a shark at the center, and a crab in the right). 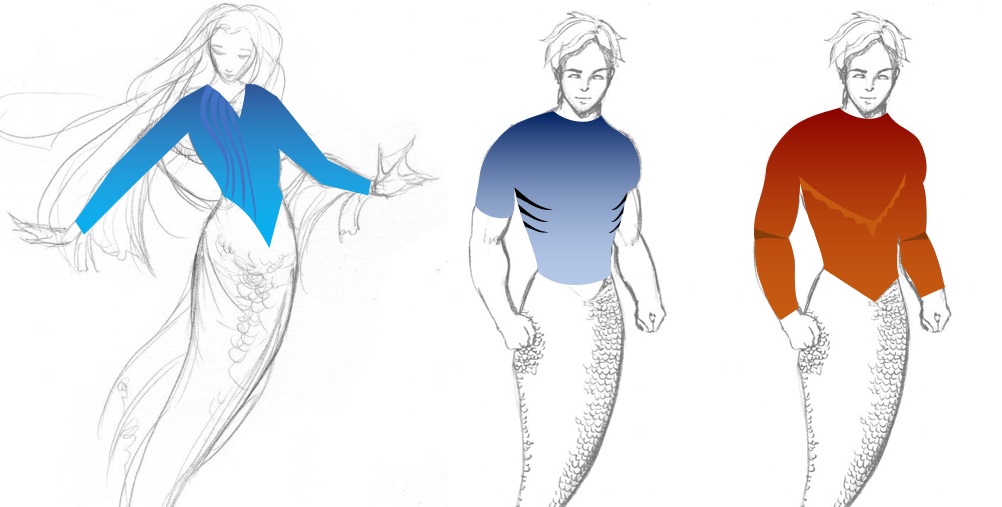 PS: The pencil drawings are not mine. I got them from the web (I neeed models).

I wonder if humans would be as potentially offended by the bottom half of a merperson as the top half. It's very likely that they'd only need to worry about shirts, and perhaps foundation garments for the females.

I'd be more curious as to how they get around human environments farther away from the water if their tails do not transform. I forsee a large number of rentable wheelchairs or scooters, possibly with blankets to drape over their tails.

Not the answer you're looking for? Browse other questions tagged merfolk clothing .

10
What would merfolk economies look like?
1
Clothing requirements for people with enhanced speed
10
Could mermaids feasibly make clothing out of natural rubber?
4
Public Transit for Merfolk
29
Practical (and Impractical) Clothing Styles For Microgravity
24
Fantasy Macro Economics: What would Merfolk trade for?
5
Clothing for Fossorial People
6
underwater calendar for merfolk?
7
How do I design clothing for nomads?