Which dinosaur would have the highest chance of survival in modern times?

Could dinosaurs survive in today's environment?

I was wondering which dinosaur would have the highest chance of survival if it was brought back to life today and left alone in some natural reserve with no human interaction.

As was discussed in the previous post, large dinosaurs would probably struggle to find enough food on a daily basis. Many herbivores would find current plants inedible or poisonous.

I was thinking the best candidates would be small,carnivorous or insect eating dinosaurs but I might be completely wrong .

There are plenty of dinosaurs around yet, normally referred to as "birds". Cretaceous and Jurassic dinosaurs that are similar to modern birds could likely get by. I don't know that modern plants would be bad to eat, nor do I have a clue how to verify such a thing. There would be modern plants that are poisonous to the dinosaurs, presumably, and the dinosaur you just time-traveled or cloned won't have evolved avoiding those plants. If most plants are inedible or poisonous, why would modern animals be nourishing?

I would personally still imagine it to be a small to medium sized Herbivore that would be the most stable. While you bring up the idea that current plants might be inedible or poisonous you can't just rule it out. There is a reason herbivores were so successful that something evolved to eat them in the first place.

Firstly Herbivores don't need to rely on another creature for their food supply. Its the sun and plants. Being at the bottom of the food chain means they have a more reliable source of food. Other creatures that eat meat wouldn't survive if the plants and sun went away either because their food sources also dies out eventually. If a herbivore can't survive in a certain area because of lack of plants, no creature that relies on herbivores will be able to survive in the same area.

How for size, large is basically out of the question. They would need to roam around and eat a huge supply of food. Chances are their old food supply and the reason they evolved so large in the first place is now gone and so they are going to have a tough time finding a replacement. Your smaller and medium sized herbivores are going to have more luck on the ground finding plants that are similar to what they ate before and the correct size. I would go with medium over small because size offers a bit more protection from predators but it really depends.

Of course for the the actual dinosaur, I'm just going to say Triceratops. Why? Because the only other herbivore dinosaur I know is the Stegosaurus and the Triceratops is cooler.

I'd say adaptability is a significant factor in survivability, so i'm looking for a dinosaur that is able to easily migrate over large distances.

For that reason my money is on a large Pterosaur, such as Tropeognathus Mesembrinus. The larger species would most likely have the greater range.

These creatures were believed to be the kings of the skies, and appear to have found their food in the seas and lakes. Considering the other creatures around today I think this position would remain unchallenged!

They would likely be vulnerable to predators when grounded, but with a significant estimated flight range they would have had the luxury of being able to island hop and select a habitat that suits them, being able to nest on the most inaccessible clifftop, or even mountaintops, and venture further out to sea than most in search of food.

For a dinosaur to survive, you would want to keep it in a zoo. This means it should not be too big, so it can be captured and contained easily.

This means a small territory needs would increase its odds of being in a zoo. Being an herbivore might decrease its lifespan considerably, because of toxins in plants that did not exist in its time. This means that it would have to be a theropod (correct me if I'm wrong), and an omnivorous one might work the best because it has the least restrictions on food.

I would suggest the oviraptor, because they only get to 5 feet in height, which makes them less dangerous to catch and cheaper to feed. They had beaks that can crush bones, so more foods, especially ones that humans cannot eat are options for them.

I may be misinterpreting the question, and living in zoos is not the focus, and in that case, oviraptors are not a bad choice. They are faster than most wolves, at a top speed of 43 mph, but their diet size is limited because they are not pack hunters. They can still hunt rabbits, and wild turkeys Also, they may be able to get into bird farms and eat the birds.

Nothosaurs and pliosaurs aren't dinosaurs... They are aquatic reptiles and quite far away from any dinosaur. Dinosaurs are restricted to land areas and never occur in water.

Pterosaurs aren't dinosaurs, too... They are flying reptiles and no dinosaurs!

Dinosaurs are characterized by the appearance of an antorbital foramen and two temporal skull openings... Neither aquatic reptiles nor flying reptiles show these autapomorphies.

Speaking for dinosaurs, small herbivorous forms like Hypsilophodon foxi would have the best chance to survive... All big forms like sauropods would nowadays starve because we don't have any forests big enough to hold herds of these animals...

Small carnivorous theropods might also have a chance... They don't need that much food to survive and hunt in packs. Big theropods like T rex need too much food and would starve, too.

Armored dinosaurs like Stegosaurus and Ankylosaurus are quite nice, but their potential ecological niche (savanna like landscapes) is totally crowded with big herbivorous mammals. Same applies for Parasaurolophus and other herbivorous herd-building dinosaurs.

Ignoring the "bird" solution (while birds are the closest descendants of dinosaurs, it stretches the English language excessively to say that they really are dinosaurs in the same way that it stretches the English language to say that humans are chimpanzees), the dinosaurs most likely to manage if revived would be aquatic dinosaurs. Technically, they are "marine reptile megafauna" rather than true dinosaurs, but they fit the general sense of the word dinosaur better than birds do.

Pliosauroids (illustration above per Wikipedia), which had large heads with very strong jaws and short necks, inhabited an ecological niche similar to large sharks, would be one strong candidate. 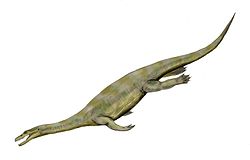 Nothosaurs (illustration above via Wikipedia), which inhabited a ecological niche similar to seals, would be another.

The blue sea environment is probably the most similar today to what it was in the era of the dinosaurs of any ecosystem on Earth. Both the flora and fauna of terrestrial Earth are mostly dramatically different from what they were in the dinosaur era, but the blue seas and oceans of today are far more similar to what they were like then, and will become even more similar with global warming.

There are lots of marine species that are still undiscovered and there are other "living fossils" like the coelacanth that were thought to be extinct only to be recently rediscovered, so these species might be discovered long after they were reintroduced.

19
Could dinosaurs survive in today's environment?

8
What would have to happen in order to have both humans and dinosaur-like creatures on the same planet?
6
Could humans survive with dinosaurs?
29
Would it be possible to mount a working minigun onto the saddle of a tyrannosaurid dinosaur?