Would it be possible to mount a working minigun onto the saddle of a tyrannosaurid dinosaur?

My modern setting has these humanoids called the Degenerates whose culture draws inspiration from those of Indo-Iranian steppe nomads like the Scythians, Sarmatians and Parthians who fight as mounted riflemen that ride mutated animals donning bulletproof armour. The Degenerates' most skilled warriors are armoured troops called cataphracts wielding heavy weaponry who sometimes ride dinosaurs dubbed Ekhidnades similar in dimensions and looks to the tyrannosaurid Albertosaurus sarcophagus (save for the fact that they have osteoderms, spiny protofeathers, stronger jaws and can expel streams of combustible liquid from their mouths).

I've envisioned that a cataphract would ride their Ekhidnades using a three-person saddle, sitting in the front most seat near the Ekhidnades' neck with while firing a minigun (like a GAU-19 or M134) anchoring onto a swivel mount fixed to the saddle. Said minigun hooks up to car batteries and ammo crates which would provide power and ammunition, somewhere around the Ekhidnades' flanks. Two other cataphracts, would meanwhile, ride shotgun and provide additional firepower with light machine guns, anti-materiel rifles or RPGs as the Ekhidnades rampages about, biting, trampling or immolating anyone unlucky enough to get in its way. 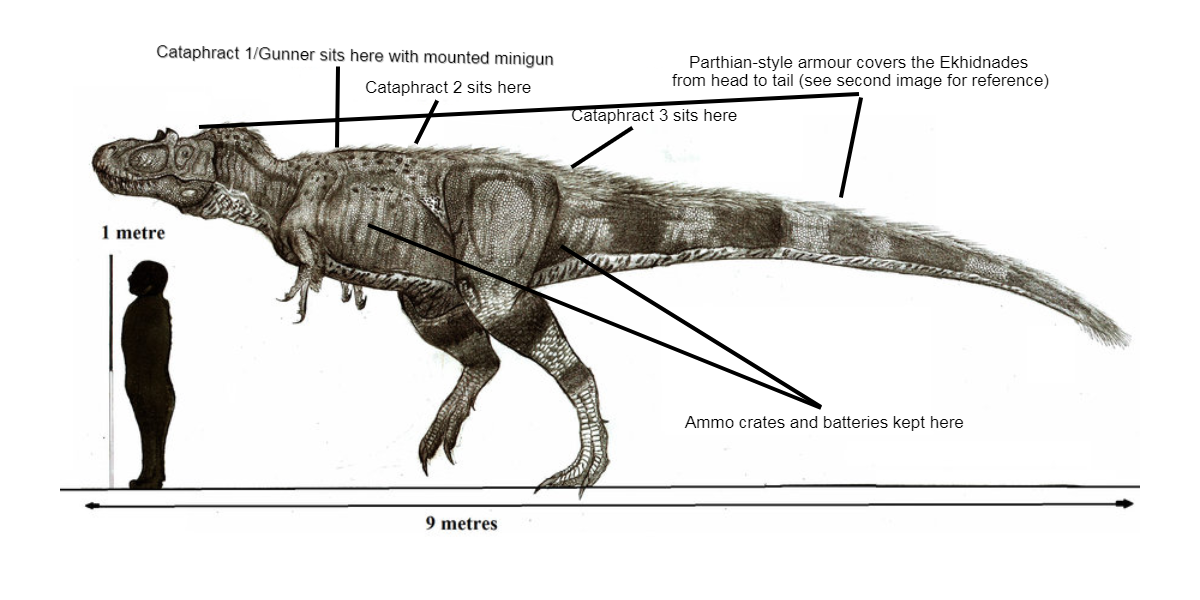 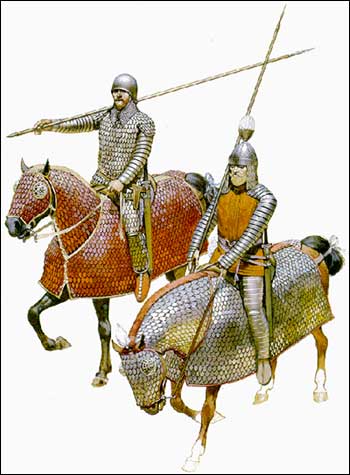 Reference image for the Ekhidnades' armour

Would an saddle mounted mini-gun be useful/practical on such an animal?

The M134 has a lightweight variant, which weighs just under 20kg.

I think that's entirely plausible to mount on an animal that size - use leather or some other padding underneath the gun so no metal touches skin, vibrations are minimised, and using leather belts to wrap around and tighten. You'd want a few attachment points at varying angles around the body to avoid chafing or it coming loose during manoeuvres, but the actual mounting I don't see as an issue.

Then the problems begin

None of these are insurmountable, but they will make things complex. You're looking at a training regime measured in years:

It may be easier to domesticate the dino and use him to pull the gun into place on a wagon.

There are a couple of problems.

However, far be it for me to tell you it is a bad idea. I mean, it is a bit of a frame challenge anyway, so I just wanted to raise points that you might already have solved in your own world. It is all about how you set your world.

However I want to add a couple I think actually helps your idea without too much complication.

No, they can't carry that much

Let's take stock of just how much you are carrying:

That means at a bare minimum you are looking at 731-1174kg. Your diagram shows an animal that is probably about the weight of an Allosaurus (1,500 kilograms). Smaller bipeds like humans and ostriches can just barely carry this % of their body mass, but Ekhidnades have much smaller leg cross sections to body size to begin with than humans or ostrich and the square-cube rule is working against them; so, I will have to say no, they could not carry that much.

Another problem with your Ekhidnades is that they do not appear to be grazing animals, this means that they will need a LOT of food per day. Depending on it's exact diet, it will need about 10-30kg of food per day; so, going on long campaigns will be impossible without leaving lots of room on the creature's back for its own rations.

Option A: Remove the side gunners and add pack animals to the group that just carry logistics stuff. This would drop your total weight to as little as ~440kg. While still a heavy encumbrance, it should be much more manageable.

Option B: Use quadrupel herbivorous mounts instead. At this scale, the mounts would closely resemble war elephants which we know could carry 3 well armed and armored riders, full barding, and needed supplies.

Possible, maybe, but not practical.

It would be just as possible to mount a machine gun on this dinosaur as it would be to mount it on an elephant: entirely doable, technologically. However, it wouldn't make sense from a military perspective. If you have machine guns, you have military vehicles. There's a reason why horse cavalry became obsolete after WW1.

Cars, trucks, and tanks don't require massive amounts of food to stay alive; they only need gasoline or diesel fuel when actively being driven. They don't generally don't get killed by a single stray shot from a bog-standard rifle; you'd need to use specialized anti-vehicle weapon against them. If they suffer some minor damage sufficient to mission-kill them like a thrown track or blown tire, that can be corrected with some maintenance time while an animal whose leg has been shattered by a bullet or explosive might need to be put down since it can never be replaced.

It is undoubtedly possible. And, as other posters have noted, with a lot of training and a few adaptions, it might even be possible to actually use it.

The issue though is one of practicality. There is a reason why cavalry are little used, in the second half of the 20th century horses were only used for transport. In the age of artillery and machine guns they are big, vulnerable targets. Your dinosaur even more so.

As a bit of Hollywood showmanship, it's terrific, and I think we'd all like to see that movie. But, as with the handheld minigun in Predator ...let's not get too bogged down in the realism thing.

The gun is built into the dinosaur.

Modern cars are drive-by-wire for smog. You tell the computer to shift, and it shifts. That way the computer isn't surprised by the sudden event, and is able to pre-adjust fuel injection etc.

Our dinosaur can't either. The dinosaur must fire the gun. The gun is part of its body. needs to choose to fire: so it will expect the side-effects: recoil, noise, etc. You must then train it well.

You might have to raise the dinosaur from a baby with ever increasing gun weights, several basic sizes and shim weights added every day, so the gun feels like part of its body and it's used to moving with it.

It isn't knocked off balance by the recoil because it braced in anticipation of it. It isn't shocked by the noise because it made the noise. (A dog isn't surprised by its own barking). It moves its head well out of the firing arc because it learned in training it got electric shocks if it didn't.

The dinosaur must aim coarsely, but a computer with servos will do the fine correction.

The dinosaur knows when it's Winchester because it can feel the weight of the empty ammo box, and can warn the human of low ammo. It knows how to help humans change the mag, or stand and heel correctly so the autoloader on the ammo truck can do the same.

The ideas in these answers aren't bad, but if you love the idea of a giant bipedal dinosaur as a mount for your troopers, keep an open mind. First, you want you critters to be cheap and easily controlled, stable in a fight, breathing fire, and carrying a big, long ranged rapid fire weapon. I will handwave HOw you get dinosaurs, and assume they just are. I am imagining a tropical, forested environment where pop-up concentrated ambush attacks would be most effective.

First, the biology will do whatever you want, so I would say go with a herbivore rather than a predator. The predator still can work, but herbivores are likely to be more abundant in nature, are cheaper to feed, an are usually more endurance-based (I know, generalizing). These creatures could even be repurposed agricultural animals, depending on the conditions. Skip fire-breathing, and mount flame-throwers on the beasts. It requires a lot less energy for the critter and weapons can be easily swapped.

Rather than very small-brained critters somehow following complex tasks, have an animal who is pithed, and the skilled rider manipulates controls to induce the animal to follow instructions. This can be as simple as a needle inserted into the brain or spinal chord, or as complex as a bundle of implanted wires stimulating behaviors (or anything in between). Your people can then swap out dead mounts easily by simply rounding up wild dinos and pithing them, rather than requiring extensive breeding, training, etc. but they still could breed them for a steady supply.

With a dino that is easily kept calm, the machine gun is relatively simple. Side-mounted might work better, possibly with a slot for a pin on each side so the dino isn't always "left" or "right." The gun would then be best mounted sideways centrally, with a "pilot" at the front near the head, gunner in the middle, and weapon-crewman opposite the gun, balancing weight.

The advantages of your dinos over vehicles will be silence, height, and range (as they can eat plants in a forest, not refuel). I envision a single dino or a small squad popping up on an enemy patrol, opening up from longish-range and pouring vast quantities of fire on the enemy for a very brief time. They are tall, and can shoot over low vegetation, and your pilot can lift the head up to see over obstacles with a commanding view. Then they would melt away silently into the underbrush.

Alternately, flamethrower-equipped units could sneak up on enemy positions, blazing, and the first thing enemies would hear is the unholy scream of flamethrowers (it's an evil noise, if you aren't familiar).

Not the answer you're looking for? Browse other questions tagged reality-check warfare firearms dinosaurs mounts or ask your own question.

8
What kind of wing is best for a winged cat

8
What would have to happen in order to have both humans and dinosaur-like creatures on the same planet?
1
Would it be possible to remove all the technology from the universe in one hundred years?
95
If the Romans found one working steam engine would they have been able to copy and use it?
3
How big would a giant pig need to be in order to carry a 10-foot tall humanoid on its back?
4
Which dinosaur would have the highest chance of survival in modern times?
3
Would it be possible to use chlorine trifluoride as the payload of an artillery shell?
2
Is it possible for a large planetary body to embed itself onto the Earth?
1
Would it be possible to use a mount that requires a much higher temperature than the rider?
22
In the far future would weaponizing the sun or parts of it be possible?