I want a layer out of frozen clouds floating around my planet. How could that work?

I must excuse my english. It's not my native language. Neither take this question too seriously. It's a stupid concept and I don't think that I will keep it by. It's just very "cool" to imagine a natural blanket over my world. (Please look at it as a challenge.)

Some insights, what the atmosphere I'm searching for shouldn't be able to kill:

There is not really a human like species on the world I'm "creating". Only in the oceans is some form of intelligent life. The landscape is dominated by roots. By wrapping themselves around each other they build some sort of streets through which they can steal/pass needed resources. Everything can handle pressure and a harsh atmosphere.

The system so far:

The planet is tidally locked in a short distance to a white dwarf. The planet is bigger than Earth and can hold a denser atmosphere. Five Moons keep the wind and the currents going. Through all the factors of friction created from the moons, the surface of the planet gets warm enough for life.

How I went searching a solution:

Ok... I didn't expect this forum to be that active. - I'm exited. Thank you all for trying to help.

I'm sorry that I called the layers out of ice "ice clouds". (I didn't know how I should call them) I don't want my "clouds" to be like in interstellar. Ice is... heavy. Because of that I thought of much thinner layers that have a large surface. Some are heavier and float lower, others are thinner and float higher. There just should be a height zone where they are common.

I still don't exactly know how they are made. Maybe when specific proportions of gases get high up into a colder area, they eventually crystalize around some particles to... Sounds stupid, doesn't it?

I thought that the structure of the "roots" might stabilize the ice. That may be a way to make the "layers of ice" static. - "Roots" or "climbing plants" grow into the ice in order to gain concentrated gases. From there they would grow even wider...

Is that enough information? I fear that I don't know any more details myself. That was the reason I came here in the first place. If this isn't enough I'd be happy to write my question again in a less cancerous and more thought out way.

I'm still not sure if you want these clouds to be sheets of ice that support weight or not. If you do... well, there are no realistic clouds that can do that, regardless of their composition.

If you're ok with clouds made of ice crystals that all float around each other, and don't support any weight, may I introduce you to...

Cirrus clouds. On Earth, these clouds are made entirely of ice crystals that formed when water was super-cooled. A single, centimeter think cirrus cloud can stretch across an entire continent.

Since plants release water vapor into the air through the process of evapotranspiration, maybe your vines have grown tall enough to reach the altitude where water super-cools. Then they release more water to replenish the cirrus clouds.

I am going to copy from an answer in another stack:

ScienceInsider interviewed Kip Thorne (who is a "renowned theoretical physicist at the California Institute of Technology in Pasadena and one of the world’s leading experts in the astrophysical predictions of general relativity", scientific consultant and executive producer of Interstellar, and author of The Science of Interstellar):

Q: Is there anywhere the moviemakers strayed outside your guidelines?

A: Not seriously. The one place where I am the least comfortable is on [a] planet where they have these ice clouds. These structures go beyond what I think the material strength of ice would be able to support. But I’d say if that’s the most egregious violation of physical law, they’ve done very, very well. There’s some artistic license there. Every time I watch the movie, that’s the one place where I cringe. I don’t think I’ve ever told anybody that.

Clouds made of material that have vaporized/become gaseous, but which somehow freeze and don't fall to the ground - and sustaining structures on them, on top of that - are unrealistic. They use the same kind of artistic license as the floating mountains in James Cameron's Avatar.

However, there is one way in which this just might happen reallistically. Asides physics and chemistry, you would have to add some biology as well.

This is a portuguese man-o-war: 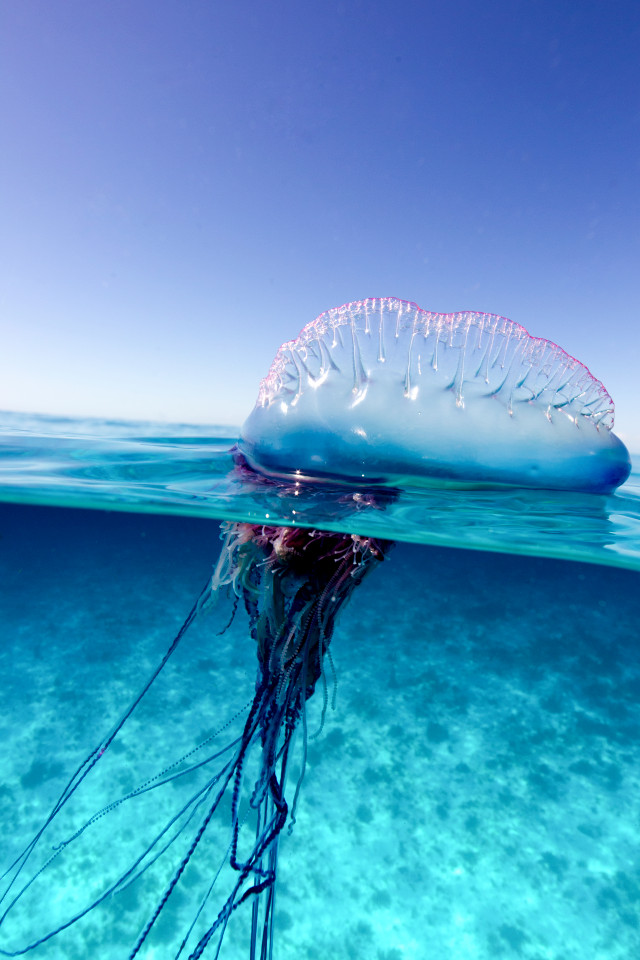 This is actually a colony of microorganisms, that has an inflatable balloon on top of it. The balloon keeps it floating on the seas.

Imagine a gigantic version of these beasts, and have the colony fill the balloon with helium somehow - they may extract trace amounts from the atmosphere, and concentrate it in the balloon. Or they might produce a light, organic gas instead (such as hydrogen sulfide, or methane), and keep it hot through metabolism. Make the balloon fluffy on the outside and there you have it. I'll leave the reamining details of these being's ecology - what do they eat, how they reproduce - up to you.

So there you have it. When any visitors from outer space come and start walking on clouds, they will actually be walking on giant, flying jellyfish.

Not the answer you're looking for? Browse other questions tagged science-based reality-check planets climate gravity or ask your own question.

9
How would a plant adapted to living at -23 degrees Celsius keep ice from clogging its stomata?

11
Could a Neptune like Gas Giant support life?
2
Floating ships on dense clouds?
12
Single biome (hot) desert planet, possible?
6
How can I justify what is basically a planetary ring system inside the atmosphere of my world?
7
How strong could a land of ice clouds be?
5
Do these plants make sense in the way I want them to establish in my world?
5
How to figure out layers of the atmosphere?