Could your grandchild be genetically identical to you?

Plain and simple: could your offspring's offspring be genetically identical to you? What conditions would this be possible under, if any?

There's nothing to prevent it, though the chances of it happening in the wild are effectively 0.

From each grandparent you inherit 25% of your genes. Your parent inherits 50% and you get 50% of that.

Some freakish coincidence could mean that you get the remaining identical 75% from your other ancestors and end up your own grandfather through misuse of time travel.

This 25% rule is a useful lie, you get a random 50% of your parent's genes, you could get more than 25% from any grandparent, in theory you could1 get the full 50% from one grandparent meaning you only need to get the other 50% from the other side, excluding the risk of inbreeding.

You can, under these conditions:

Your grandaughter will be a clone of your daughter who is also your clone. So the 3 of you have the same genes and are also related.

I am going to be bold and answer this question by cheating a little. I will assume that:

Linebreeding can not give 100% equality but can get you arbitrary close given enough time.

It works by breeding with your own children repeatedly, until you reach a satisfactory genetic closeness. Using the illustration from wikipedia, you are S, your initial partner is D, and your children and grandchildren are DN: 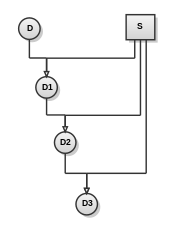 D3 will be your grandchild. It is also your child, but an individual can be both. You are D3's parent's (D2) parent.

The tenth generation has 99.9% of your genes, and the twentieth generation shares 99.9999% of the genes with you.

In light of the answers from other people, I'd like to offer some basic math for how likely this is to occur.

The scenario I'm considering is as follows: You, an ordinary human, have two children. Those children have a child together (yes, I know incest is bad - this is purely hypothetical).

You, as an ordinary human, possess 46 chromosomes in 23 pairs. When you have a child, they receive one of each of these pairs from you (assuming nothing strange1 happens). As a side note, barring any medical breakthroughs that I'm not aware of, you would have to be genetically male (XY) so that your two offspring would be able to have children with each other.

Now that we have established the scenario, let's talk about the probabilities:

Let's assume the chance of someone's child receiving one specific chromosome from a pair is 1/2, as there are two possible outcomes.

So, the likelihood that your grandchild would be a genetic duplicate of you is 1/(2^69), or roughly one in 590 quintillion.

1 By "nothing strange", I mean there are no errors in the replication of the chromosomes, and nothing along the lines of having 3 chromosomes of the same type, such as the case of Triple X syndrome, or anything else I haven't thought to list here.

Is it possible? Yes.

Is it likely? No.

The only way to get an identical grandchild is if you have two children, one male and one female. Each of those children will get half of your DNA; in order to conserve 100% of your DNA, there can't be any overlap between their copies. They then need to have a child that combines the two half-copies into an original whole. The odds against this working out are pretty low.

Humans have 23 chromosome pairs, for a total of 46 chromosomes. Each of your children has, under normal circumstances, one chromosome from each of these pairs selected at random. That gives a 1-in-8,388,608 chance of child "A" and child "B" getting non-overlapping copies of your DNA. Not too unlikely, as such things go.

However, the same process applies to the grandchild: there's a 1-in-8,388,608 chance that the genetic contribution of each of its parents consists entirely of "your" DNA. Multiply that out for both parents, then multiply by the odds of the parents having the correct genetic makeup, and you get a 1-in-590,295,810,358,705,651,712 chance of the grandchild being genetically identical to you (give or take mutations). Yeah, not going to happen.

Now, I'm not just talking about the absurd odds against it when going with the single-generation inbreeding method, the time it takes with the line breeding method, or the wild cost it would have if you use a gene editing based method.

The fact of the matter is that we don't really have one set of genes; due to mutations, both deleterious and potentially intentional ones that happen at different rates throughout our bodies, we all have several very similar but still distinct genomes throughout our cells.

Even if we use the most reasonable method of making a closely related grandchild (clone of a clone), we have to make a series of choices that will prevent us from making a perfect copy.

First of all, from whence do we get our DNA template for our clone? A skin cell? A blood sample? A brain neuron? It matters, because they may well have different (although very similar) DNA. This choice has to be remade for the clone of a clone, compounding any errors.

Second, how would we guarantee that each clone is subject to the same environmental stimuli and ionising radiation and viruses that can mess about with their DNA, and that they have the exact same number of cells in the exact same places to respond to these stimuli? The answer, of course, is that we can't. It might not even be theoretically possible.

Finally, how would we ensure that the genetically identical clone stays genetically identical? Again, we can't. As I alluded to earlier, our body engages in an act of intentional messing about with our genome, specifically in our brain. Although the mechanism isn't completely understood, it appears as if memories are, in part, printed onto the genomes of brain cells, in addition to being stored in the network of neurons. This leaves brain cells with a lot more mutations than other cells in the body.

In other words; if you're not genetically identical to yourself, how could you hope someone else to be?

One exception: It can be done if you are a single-celled organism that reproduces quickly and asexually.

No. Even if you could have a "grandparent" and "grandchild" who were genetically identical, perhaps by two generations of cloning, they would not be the same person. Just as identical twins are not the same person.

Of course you could, given the appropriate technology, have multiple generations of genetically identical clones. That's quite commonly done with plants. For instance, every plant of a particular rose variety is a clone of a single original plant.

Since copying of genetic material occurs with errors (mutations), whether you can get an identical copy even in the case of cloning (as mentioned above) depends on mutation rate.

In DNA-based organisms like humans mutation rate for point mutations is about $10^{-10}$ per DNA base pair per cell division. Human genome is $3 \times 10^9$ base pairs. The number of cell divisions in the germline is about 20. Thus you get around 6 errors per each genome copied from grandmother to mother and another 6 from mother to daughter.

The probability that you get an identical, mutation free genome is given by Poisson distribution and is about exp(-12) ~ $10^{-5}$, or one in a hundred thousands. Since humans are unable to produce such a large number of offspring, there is no chance to get an identical child or a grandchild.

Actually we are rapidly degrading genetically as a species: Mutation and Human Exceptionalism: Our Future Genetic Load http://www.genetics.org/content/202/3/869.full

Sure, but it is unlikely.

Suppose that the grandparent's ("your") ("GP's") genome has about 20,000 protein coding genes and that about 2,000 of these vary across the human population and (to oversimplify) that when a gene varies, there are two equally likely variations.

To be genetically identical, the grandchild's ("GC's") genome has to match all 2,000 of the variable genes which, in this simplified model, has a 1:2^2,000 or 1:1e+600 likelihood if the matching is random and independent.

If GC were the offspring of a disgustingly sick incestuous relationship between GP and GP's child, GP contributes on average 75% of the genes to GC so the likelihood increases by another 2^500 to 1:2^500 = 1:1+e150.

Someone could arrange for that to happen in a way that would be sort of a cheating method.

1) It is certainly possible for someone's grandchild to have by chance the exact same genetic code; but the odds against that ever happening are astronomical.

2) Therefor some medical way to ensure that someone has a grandchild with their exact genetic code would be needed.

Someone could clone themselves and have their daughter serve as a surrogate mother for the clone. Thus when the clone was born it would be the (nongenetic) child of their daughter and thus their grandchild. That seems like using a loose and somewhat cheating definition of grandchild but it is something that it might be possible for medical science to achieve only decades in the future.

Not the answer you're looking for? Browse other questions tagged science-based genetics or ask your own question.

79
How many people can you feed per square-kilometer of farmland?
3
What if a person can bear a child that is genetically identical to its parent?
3
Mirrored twins that aren't identical?
7
Breeding two species to become genetically more similar?
3
Genetically Diverse Slaves
4
How could offspring only ever display the phenotype of their parent and never ancestor?
12
How does a species with three "sexes", where only two needed are at a time, determine the sex of its offspring?
9
World of (nearly) identical snowflakes