I was thinking of a scenario in which people decide to use breeding to try to make two species more genetically related to each other. The people take genetic samples of each individual from their breeding populations and compare its DNA to the DNA of the other species. The individuals that are most genetically similar to the other species are the ones that are allowed to reproduce. The people do not transfer genetic information between the two species as they consider that cheating.

Normal populations have genetic variation. Normal breeding techniques can remove unwanted parts of this variation. It does not create new genes, it only select the best of what is already there. "Best" being defined by the breeder, of course. (Assuming a fairly short time interval, less than a thousand years)

To a small degree one can discover new mutations and select the best of what appears, but that is a very long-term project.

If you start with two closely related species they will have mostly the same genetic "slots", but can different gene variants in those slots. E.g. both will have a fur colour gene in the same place, but with different colour genes there.

If you start with two not so closely related species, they don't even have the same slots. They will both have fur colour genes, but they will be in different places. This will be a hopeless situation for the breeder.

So, you can push the two species closer to each other, up to a point. Going beyond that point will be very very slow.

If you start with two species that are very closely related, you can probably make them interbreed this way, but they would have to be very close to begin with.

A project that might be within reach of today's science is to understand the mechanisms that make hybrids sterile and specifically breed to avoid those. I don't know how hard that would be.

It works, but only under one condition: all (or most) of the same genes exist in both species.

This is actually being tried right now as a way of bringing back some extinct animals. Specifically, the tarpan. 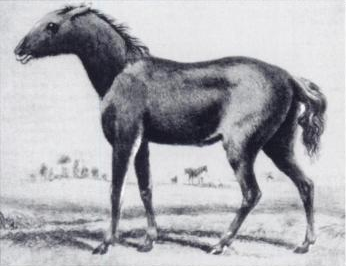 The tarpan is an extinct breed of wind horse. However. it's been conjectured that they may have interbred with domestic horses, in which case various lines of domestic horses may have the genes that make up the tarpan. If enough are present, it may be possible to selectively breed animals for genetic similarity to the tarpan, introducing various lines of modern horses to collect different bits of the tarpan genome into a single breed of animal. If all of the genes are present somewhere in modern horses, this should be possible.

It would not be possible, however, to breed something like a human into something like a chimpanzee. There are some major mutations between the two genomes, like the fusing of two chromosomes in humans, which would need to effectively mutate in reverse in order to produce a chimpanzee. This may eventually happen, if you're willing to continue a breeding program for millions or tens of millions of years, but wouldn't be possible in the short term in the manner that it is possible to breed back something like the tarpan.

What you are essentially trying to do with this is turn two species into one species. The question then becomes: what is the goal?

However, comparing the individuals of each species for genetic similarity is likely an exercise in futility even if they're close to each other (and you'd want them close to start or you make the entire process far more difficult and take much more time).

I tried several times to give a concise answer from here and always end up writing a book, so here it goes again. Briefly, what you have to consider is:

(a) that the species have gross genetic differences already

(b) you're trying to separate relatively small differences (the individuals in a species) from very large, coarse differences (between the two species)

(c) it's not as straightforward as looking at the genes because the 'junk' DNA between genes is actually crucial for gene expression and function and therefore, must also be considered

(d) you're also fighting against random mutations (about 1 mutation/1,000,000 cell divisions) that could move your project backward or forward.

There are so many issues that would make this an exercise in futility that you would have to have very bored, very long-lived, creatures that would even contemplate attempting this.

However, I suppose, technically, it could eventually be done.

I feel like there are a couple of different cases to consider here, and which case is applicable depends on what exactly you mean when you say your scenario involves "comparing DNA." What exactly does it mean for two species to be "genetically similar" in your scenario? Same number of genes? Same possible gene variants for particular genes? Same number of chromosomes?

If the DNA comparison is very granular, something like gene-to-gene, your scenario only makes sense if the two creatures are already quite similar, having comparable gene "slots." It's highly likely that two creatures with the same chromosome and gene counts could already interbreed, so the pursuit of making them compatible is pointless. The other answers here have already discussed this case in much better detail than I can.

On the other hand, if your scenario could accept the lower-tech alternative of classic breeding based on gene expression rather than on direct DNA comparison, then you have a case of forced convergent evolution going on. You could theoretically breed any two creatures in the world to look more and more similar to each other. You could take a certain shark species and a certain dolphin species, for instance, and (with enough time and patience) make them both separately look like a halfway point between the two. Or, as Theik proposed, you could simultaneously breed a tiger to look more wolflike and a wolf to look more tigerlike. However, since the two species would have come from very different genetic starting points, it's extremely unlikely that you'd be able to get them to interbreed.

The problem you are going to have is diminishing returns. At first it will be easy to selectively breed animals that are closer to the target. However over time that will become harder and harder as natural variation, mutation, and the sheer scale of the task start to kick in.

You might be able to get the genes for eyes right, but in the process the ears and nose become wrong. You fix the fur but then the tail is wrong. That's a simplification as in reality we are working at a much lower level but you get the idea.

In traditional selective breeding you emphasize one trait and sacrifice others to achieve it. Here though you are trying to select everything, which means you are going to end up taking 5 steps sideways and 1 backwards for every 2 steps forwards and the closer you get to the goal the harder and harder it would be.

So in theory it's possible, but you are talking a monumental amount of work.

The biggest problem will be chromosomes. Do the two species have the same number/size chromosomes? How are the genes distributed across those chromosomes?

It is going to be impossible to select for this. It would require monumental strokes of luck at regular intervals. Rather like the balls coming out of the pockets of a snooker table and forming themselves into a perfect triangle.

Probably the only way to do this would be to evolve them both backwards until you reached a common ancestor. This would require you to know the entire genome of the ancestor and evolve backwards to it one step at a time. Very expensive, very time consuming and completely pointless.

23
How fast could a directed breeding program turn another Earth species intelligent?
3
What would be a plausible mechanism for conception involving an arbitrary number of gametes?
3
Highest possible percentage of genetic diversity within a species?
7
How long would it take for one hundred couples to have one million descendants?
7
Would a society with two different species that can interbreed be viable?
3
Would having more than two sexes decrease the number of individuals required to have a sustainable population from a genetic perspective?
11
To what extent is it feasible for this race to be majority female?
2
How could a species have two sex-determination systems?