Rotating city in a fantasy world

In my fantasy world, the world is covered in a massive ocean that is miles deep in all directions, the only "land" are massive bodies of gods that dot the blue world. How these bodies got here is not important, but what is important is that humanity has taken refuge upon and inside these creatures. However, I am focusing on the inside aspect of this, as the body itself provides many necessary resources for these humans. These bodies are not like any other islands, stuck to the ground below but rather float atop it. And because of this, they move, rolling and tumbling along with the ocean and its harsh weather.

But a city that rolls around like a wheel not particularly the safest place to live, so how would the humans make it a safe to build a large city within one of these bodies, assuming it has the anatomy of a human but just enlarged so that it is 304 square miles?

Remember that this is fantasy and this society has technology equivalent to that of Imperial China. Solutions can be on both the inside and the outside of the body. Also, I would like to avoid magic and keep it strictly technical.

Edit: I am unconcerned about the science of this rotation as this is a fantasy world. However, I did mention that the world has harsh weather that at least ads in the rotation.

Even if the body is not anchored, It is not likely to rotate very easily unless it has been dismembered.

Human anatomy, very crudely, is a big hollow box with a rock at the top and four dense sticks stuck on in a symmetrical pattern.

Jump in a pool, swim to the bottom and then just relax. Most likely you are going to rotate til you are face down, rise til your back breaches the surface, then stay there with your arms and legs trailing down in the body. The is because your head, arms, and legs are more dense than your chest cavity and will tend to remain submerged. Also the hinging in your arms and legs will also tend to move them toward the front of your body in a relaxed state.

What does this mean for your floating society? Well, fears of rolling over are going to pale in comparison to fear of whatever might hit the body with enough force to roll it over.

That kind of takes the fun out of the question though. What your society will likely need is to build a cage along the sides of the corpse, or maybe a series of sealable tunnels in a web work around the body. Periodically pump out the tunnels on the submerged side and if the body flips, just move around to the part that is on top. I would also focus on the building of fast, sturdy boats.

An alternative would be to build a floating city that actually stays in the water the whole time. Anchor it to the head of the body, in such a way that it can be cut free in an emergency. If the body rolls, it will most likely be along the axis of the body. If the city is along the head you have less to worry about in the way of flopping limbs.

Sorry, but you are getting science

What are the dimensions of this island?

Also important is a mass estimate. Using the same ratio, and an average human mass of 70 kg, I get $3.3\times10^{15}$ kg. Since you want the island to float, it can't weight much more than this, since the human body's density is just below that of water.

How will waves affect an island this big? 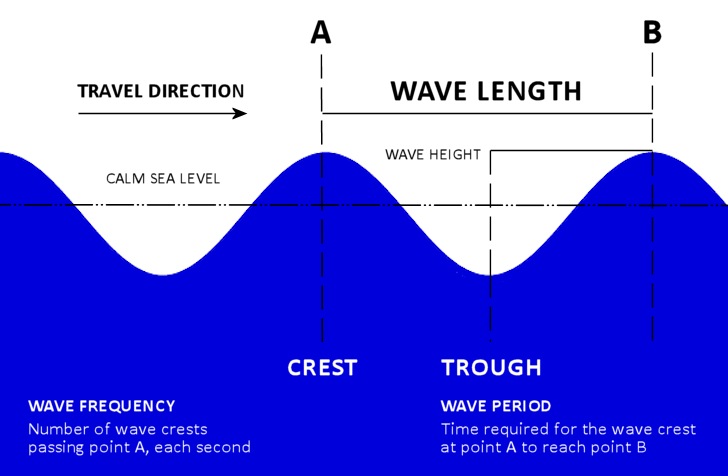 The important concepts are wavelength and wave height. For wind waves, even the strongest storms with sustained winds above 100 km/h won't produce wavelengths much longer than 200m.

The wavelength is important because of what is happening under the god-island. If the waves are striking along the shortest axis, the 14 km across the waist, then there are about 70 wavelengths passing underneath the island. That means that there are 70 'peaks' of water that are holding up the body of the island. The island will not be caused to rock back and forth, because even when one wavelength passes out from under the end of the island, there are still 69 points of contact holding the island steady.

What about big waves?

Tsunamis, on the other hand, will have an effect. A tsunami can have a wavelength up to 200 km, due to the speed at which the wave propagates. Therefore, it can have the power to lift the entire island up. The tsunami that hit Japan causing the Fukushima meltdown was about 10m high; parts of it were up to 40m high. Lets see what the effect of a 10m and 40m tsunami wave with wavelength longer than the island would have.

There would be two effects imparting energy to the system. Once the island was lifted up on one end by the tsunami wave, and after the wave passed and normal sea level was returned, there would be an end in the air, pulled down by gravity, and an end in the water, pushed up by buoyancy. Modeling the body as a rod, we can divide it into two systems, each with their own energy contribution.

Add these together, we see that the tsunami has imparted about $18\times10^{15}\text{ J}$ to the island, equivalent to a magnitude 8 earthquake.

The normal wind and waves will not even faze your island. Even the most powerful typhoon can't whip up waves strong enough to make the residents of your god-island notice.

However, a magnitude 9 earthquake in the nearby ocean could. The resultatnt effects to the island are equivalent to a magnitude 8 earthquake. This sounds bad, but massive tsunami's are relatively rare, and it is not as if the ancient Chinese whose technology level you are copying never got hit by such an earthquake.

All in all, no change is necessary. Buildings can be made as if they were on Earth, just expect them to be damaged by infrequent earthquakes, just as they are on Earth.

Not the answer you're looking for? Browse other questions tagged magic cities urban-fantasy or ask your own question.

10
How would a political city be planned?
8
City Design: Freefall
6
City in the wake of the Yggdrasil: Engineering Considerations
50
What would the fortifications of an underwater city look like?
31
How can I create a map of an underground city?
3
Survival of an Industrial Revolution city after being transported to a fantasy world
0
Siege technology for massive migratory fleets in a fantasy world
1
How big of a city could my volcanic island support?
6
What are the elements required for an enclosed prison-city?