Siege technology for massive migratory fleets in a fantasy world

In a fantasy world that I am working on, the world is covered in one massive ocean, with the only land being these 300 square miles "god" corpses (that do not decay) that can grant people magical abilities when they come in contact with a certain part of it. How this came to be is not important. What is important is that now humanity is constantly fighting for control of these bodies and their magic-giving properties.

Those not lucky enough to have to access these bodies (which is most of the population) live in giant, self-sustaining migratory ships about the size of a cruise ship. The people on the corpses make massive cities both on and inside the corpse, that, like the ships, are self-sustaining.

So, in order to get these corpses, the people must fight for them or at least be able to get inside of the corpse and perform a ritual in which the people performing it will achieve the magical ability that takes about thirty minutes.

So, with this in mind, how would a group of ships be able to invade one of these cities most effectively, and not destroy it in the prosses as they need to keep the corpse intact?

Note that this world is based on the Polynesia from 1800 B.C to 700 A.D so these people are expert sailors as well as have the technology of Imperial China except for the gunpowder. Also, note that there can be smaller ships too, the migratory ships are just the template.

There are various factors at play here that need to be explained in order for the formulation of an acceptable answer.

How powerful is the magic? Can it destroy ships? Does it give soldiers of the island superhuman strength? Does the magic make every single one of the body's citizens superhuman?

How self sustaining are the bodies? Do they draw food from the actual body or from the sea? Do the bodies provide metals and stones to the citizens? How does commerce work between bodies? Does it happen that bodies happen to produce products that others can't, such as a body that can provide iron, but can't provide wood, thus making commerce crucial? How far are these bodies from each other?

Four ways of dealing with the bodies

Anyway, I believe that there are currently, on the details you provided, four forms of dealing with these bodies.

Some bodies might not produce food or other important products that are vital for the survival of it's citizens, so they rely on trade, and by effectively cutting them out of commerce, they'll be forced to surrender their body. Maybe it's not even necessary for the fleet to encircle the body, they can just attack any ship that comes out or tries to reach the body.

Just as pirates and privateers did in real life, a fleet can successfully storm a ship by simply boarding it with well trained men, killing everyone in their way and assuming command of the body as fast as possible.

A fleet can have many of it's troops enter the body stealthy, disguised as merchants, migrants, tourists, etc..., And secretly perform the ritual, or maybe execute a coup and take down the government, maybe acquire positions of power within the body, or if numerous enough, simply wreak havoc inside the city, making way for a fully fledged invasion.

Ships can carry trebuchets, catapults, polybolos and other siege engines, while it's important for the body to come out as intact as possible, the best way to destroy a city, especially a fortified one, is to bombard it. After enough bombardment, an amphibian assault can take place and take over the city.

The fleet attacks one side while a few men, swimming or sailing in very low rafts infriltate the corpse from the opposite side.

There was a chapter of the television series Ancient Discoveries, Ancient Super Navies, that covered underwater attacks with very primitive techonology

If the fleets are so good, your people have a very good understanding of sail technology. Even in the Middle Ages, the idea of using kites as a bombarding method was considered:

Very few walled cities would be prepared for an attack from above. 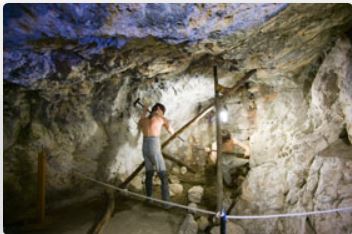 Siege tunnels could be dug while the city defenders are distracted by the naval bombardment. I have to think digging thru a god body would be easier going than digging through solid rock. Siege tunnels have a long and very interesting history. http://militaryhistorynow.com/2012/06/11/the-warfare-underground-a-brief-history-of-siege-tunnels/

1: Dig under the city defenses then burn the support structures in the tunnels, causing them to collapse.

2: Dig a tunnel large enough to allow attackers to emerge within the city (as the Romans tried to do in the siege of Ambracia.

3: Last, and coolest: attackers are trying to do one of the two options above when they emerge into a natural cavity within the god body. They perform the ceremony in there.

Not the answer you're looking for? Browse other questions tagged technology magic warfare siege or ask your own question.