Is it possible to obtain a cold radiating material?

Global warming is awful, we all agree.

The problem is that there exists materials that warm up easily naturally or artificially. But, why isn't there cold materials? Cooling something requires energy (refrigerator).

I am going to present a fictional material and I hope you can tell me if it's possible or if not how could it be possible or do other similar things exist:

Basically I just want something that can eliminate the heat and cool the surrounding effectively a place without consuming to much energy.

Maybe I am wrong with the idea of a heat absorbing material but then, can a "cold material" and how could it be (the solution can be completely different from what I thought).

Dihydrogen monoxide seems to match almost all the criteria:

I think you might be thinking about this slightly wrong.

Cooling can be thought of as simply moving heat from one place to another. You take heat from one place and move it to a different one. If the first place is hotter than the second then 'cooling' happens all by itself as the temperatures equalise. If you want them to equalise faster or you want to move temperature from a hot place to a hotter place then that is when you have to use energy. All a refrigerator does is moves heat from the inside of the refrigerator to the outside (the pipes on the back are a radiator to get rid of the heat from inside).

So no, there exists no material that will 'just cool' all on it's own. That would be a violation of the laws of thermodynamics. You can have materials with a high heat capacity that you can dump heat into (Radovan Garabík's answer is a pretty good example of that!), but first they'll have to be cooled down, or start off cold. The bottom of the ocean is a good one for this: water is at it's densest around 4 degrees, so the bottom of the ocean is always around that temperature. You can pump heat into the ocean all day long, though it might have some unintended consequences. Eventually though your heatsinks will reach the same temperature as the thing you're trying to cool, and you'll have to spend more and more energy to move the heat from A to B.

But this brings us to endothermic reactions. If you have two materials which, when brought together, require energy in order to bond then they will suck heat out of the air nearby. Again though you run into a problem: These reactions will eventually stop, and you'll either need to use energy to break the chemicals apart again (thus releasing the heat) or introduce more of the chemicals you used in the first place. The exact whys and wherefores of how you can do this and what chemicals might be good is more chemistry than I'm comfortable professing to know, but it might help, especially if you have a way of shunting the result off world and bringing in more of the raw chemicals from somewhere else.

The third option is using the heat to extract usable energy, then shoving that energy somewhere else. Remember I said the ocean was a good heatsink? Well, it is. Turns out if you pump it up to ground level and equalise it's temperature with the surface water you can pull out usable energy, essentially using the entire ocean as a refrigerator, but in reverse. This actually works with wind as well, as winds are driven by temperature differentials. What you do with that energy is then up to you, but remember that if you use it on Earth all you're doing is (again) moving the heat around. Try firing lasers into space. If you're clever enough you might be able to balance the incoming and outgoing radiation and halt global warming. Or maybe just build a really good renewable power grid.

So, the problem is that you need somewhere to put the heat that isn't 'here'. So, first lets say that there are multiple universes, and that they're accessible. Second, lets say that we know some of these universes are much colder than ours, and some are warmer. Third, lets posit the existence of a specific crystalline matrix that will act as a 'bridge' to a universe colder than ours. Any crystals that can be convinced to grow into this 'Unobtanium matrix' will then act as a (potentially infinite) heatsink, into which we can pump heat with reckless abandon.

Which may piss off the frost giants on the other side...

Cannot radiate cold. Can have a cool surface that absorbs radiation.

If you are consuming energy you are producing heat unless it is performing other work like lift a rock.

A refrigerator in net produces heat but if you could get that heat out of the atmosphere than it would cool. A light beam (radiant energy) pointed at the atmosphere might work.

While not "radiating cold" in the way you are thinking, there are developments of materials tuned to radiate in infrared frequencies which the Earth's atmosphere are transparent to, and placing these on a roof, would potentially allow you to radiate heat into the 3K background of Space, which is effectively an infinite heat sink for our purposes. 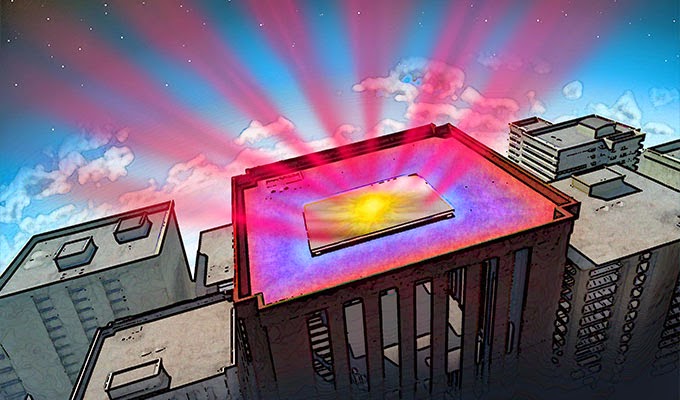 Cooling is a significant end-use of energy globally and a major driver of peak electricity demand. Air conditioning, for example, accounts for nearly fifteen per cent of the primary energy used by buildings in the United States. A passive cooling strategy that cools without any electricity input could therefore have a significant impact on global energy consumption. To achieve cooling one needs to be able to reach and maintain a temperature below that of the ambient air. At night, passive cooling below ambient air temperature has been demonstrated using a technique known as radiative cooling, in which a device exposed to the sky is used to radiate heat to outer space through a transparency window in the atmosphere between 8 and 13 micrometres. Peak cooling demand, however, occurs during the daytime. Daytime radiative cooling to a temperature below ambient of a surface under direct sunlight has not been achieved because sky access during the day results in heating of the radiative cooler by the Sun. Here, we experimentally demonstrate radiative cooling to nearly 5 degrees Celsius below the ambient air temperature under direct sunlight. Using a thermal photonic approach we introduce an integrated photonic solar reflector and thermal emitter consisting of seven layers of HfO2 and SiO2 that reflects 97 per cent of incident sunlight while emitting strongly and selectively in the atmospheric transparency window. When exposed to direct sunlight exceeding 850 watts per square metre on a rooftop, the photonic radiative cooler cools to 4.9 degrees Celsius below ambient air temperature, and has a cooling power of 40.1 watts per square metre at ambient air temperature. These results demonstrate that a tailored, photonic approach can fundamentally enable new technological possibilities for energy efficiency. Further, the cold darkness of the Universe can be used as a renewable thermodynamic resource, even during the hottest hours of the day.

So using radiative materials to eject heat energy through infrared "windows" in the atmosphere can be used to cool installations and buildings.

The problem with global warming isn't that carbon dioxide or methane in the atmosphere "warms up easily" but rather that it absorbs too much of the infrared energy that Earth emits back to space. Therefore, we have as much solar energy coming in as always, but now not enough of Earth's infrared emissions are escaping to space before being reabsorbed. That excess of reabsorbed infrared is why we're accumulating heat.

To counteract the effect of greenhouse gasses like carbon dioxide you'd either have to either make the atmosphere reflect away more incoming solar energy, or have it emit more of the Earth's excess infrared. Neither of these involve the kind of cold-feeling heat-absorbing material you imagine.

What you seem to be describing in your original post is a very brute-force way of dealing with the situation. Essentially, you're trying to invent a way to build a refrigerator that cools the Earth and dumps the excess heat into space. The problem is that not only would it be remarkably inefficient but it also means that the HeatIn>HeatOut problem of global warming is never truly solved; which means you're essentially creating a situation analogous to dumping buckets of water (heat) out of a sinking ship (hot Earth).

That's not to say it's impossible, but it is remarkably silly. You'd have to have Earth-surface-to-outer-atmosphere transport be so darn cheap that you can bring warm material from Earth up to the edge of space, for fancy space refrigerators to cool the material as cold as scientifically possible, and then transport it back to cool the Earth's surface. Essentially you'd have to have space travel be so cheap that you can ship Earth water to space to make into scifi-ice-cubes and ship them down to cool the oceans.

If space travel is that cheap, though, building a giant reflector (or a fleet of smaller reflectors) to reflect away a sufficient fraction of the sun's energy would be far simpler and would fix the HeatIn>HeatOut problem outright.

Although you can't radiate cold (as it's the absence of heat), it can subjectively feel like a radiative effect in a heat-conductive medium (e.g. air). However, it doesn't follow an inverse square law like radiation.

There is a ficitonal precedent for your technology in science fiction; Alastair Reynold's Revelation Space series contains "Cryo-Arithmetic Engines", a fictional technology that locally violates the Second Law of Thermodynamics through quantum mechanics.

(A lot of the technology in his series is effectively handwavium, but done very well.)

If you're going to take a bit of artistic license with the laws of nature, you could postulate a hyper-efficient photosynthetic material which combines CO2 and H2O into formaldehyde and oxygen gas, using as its energy source infrared radiation (ie., heat).

The heat is absorbed and the CO2 is reduced. Be sure to collect the formaldehyde and use it as a feed stock for your organic chemicals industry.

Theoretical way to accomplish localized cooling as you desire. Is to create an energy drain. In this case a heat sink with an infinite capacity.

Not the answer you're looking for? Browse other questions tagged physics materials .

9
How could I make a portal to parallel universes as scientifically realistic as possible?
6
How fast can heat be carried away from a small source?
2
Applications of Limited Kinetic Energy Manipulation [Superpower]
15
Alternative skeleton material for an Earth-like planet
8
Absorbing heat from unlikely places
6
Most Alchemy-Resistant Material
18
What kind of materials could be made with immense heat, that weren't available in a typical Medieval setting?
3
External 'Stellaser' style beam weapons driven from 'plasma envelope' surrounding a spaceship - Hard Science Fiction
20
What's a good fire-resistant material to write on?