Space exploration without electronic devices, is it possible?

Let's suppose anti-gravity/gravity-manipulation/telekinetic technology is found in the near future.

It allows to move large ships (thousands tons) into space from the surface of the Earth with relative ease.

However it comes with nasty side-effect - any electronic device within "field" is short-circuited.

Question is: Is it even viable to continue space exploration without electronics? Using human brain (crew) and mechanical devices and (if possible) chemical mechanisms?

There are obvious problems like navigation, communication, telemetry... Can they be overcome? Or gravity manipulation will be abandoned and people would look for another technology for space travel?

Thanks to commenters! As it was pointed out - electronics can be used when engines are turned off.

What if we increase difficulty a bit - engines ("field") can't be completely turned off (like nuclear reactors can't be stopped fast), or they need a long, energy consuming process of warming up/cooling down so it prevents to switch mode during spaceflight.

Thanks for comments! Main goal for question was to justify somehow consistently "advanced on planet civilisation and primitive space naval type battles like in the first half of 20 century", without cultural or law limitations. Probably i ll make another question with this specific goal.

Orbital mechanics isn't that difficult to work out if you have a background in mathematics. Just take a look at some equations on Wikipedia. You could do these by hand, or have a mechanical computer do the work. It won't be terribly accurate, but spacecraft on interplanetary trajectories routinely make correction burns despite their razor-thin fuel budgets. If you can easily haul a massive ship into space, you probably have enough of a fuel budget to be sloppy.

Flight control (Both navigation and ship control) is more difficult but solvable. Apollo featured a telescope to help it get its bearings, and given the primitive state of computers at the time it might not be too terribly difficult to come up with a mechanical counterpart. Your ship obviously can't be fly-by-wire, but if you keep the design simple and limit the number of thrusters (Or rather, keep all of the thrusters centralized along your primary axies, so they only impart one movement/rotation), you can greatly simplify the ships controls. For purposes of pilot comfort installing a mechanical autopilot that nulls out rotation is a good idea.

Radios might just be the easiest thing on this list - They've been around far longer than computers, and nothing about them requires electronics as we think of them today.

Now, a lot of people in your comments suggest just turning your electronics off. Assuming this doesn't work in your setting, you can launch the hull of your ship using your Anti-grav, and then send up conventional rockets with the electronics it's going to need. That said, a system that can cheaply and easily lift thousands of tons of spaceship into orbit is going to be a fantastic interplanetary engine, so you'll probably want to keep using it.

Final thing. I assume that it 'fries' electronics by inducing charge differences in the circuitry and creating damaging electrical arcs. What does it do to humans?

Spaceflight was described in fiction as far back as the Victorian era (actually even farther back, but without any sort of technical or scientific understanding of space), so it is quite possible to imagine a "steampunk" spacecraft using mechanical and fluidic devices to run the systems, calculate the trajectory and so on. Even into the 20th century, the idea of manned spaceflight was predicted upon the need for a team of technicians to keep the equipment running and a human pilot to guide the spacecraft. The entire RoBo (Rocket Bomber) idea was based on the principle of a manned spacecraft to deliver an atomic bomb on target from space, since electronics (and of course mechanical computers) would not have the accuracy or ability to adapt during the very short mission. Now multiply by how many days a mission to the Moon or Mars would take, and you understand why von Braun's 1950 era conception of a Mars mission took a fleet of ships carrying 70 men. 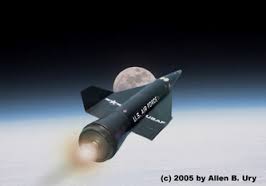 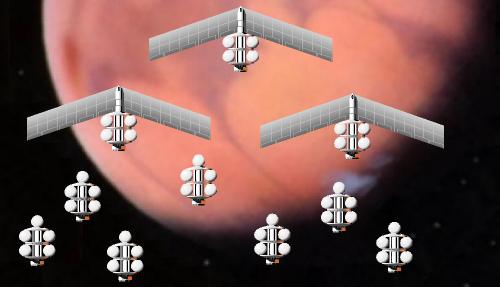 Really, the only thing that prevented a squadron of USAF rocket bombers becoming operational in the early 1970's (projected timeline) was the invention of the transistor and development of rugged and reliable microelectronics that could replace the pilot.

So if there is no development of microelectronics, then spaceships will need human crews doing jobs like astrogation, engineering and all the other tasks that a traditional ships crew is needed for.

Navigating and communicating through space should be doable by teams of people. They were doing it on the high seas for millenium before we took to the heavens. The problem with space though is that people like to eat, drink, breath, and not freeze to death. Navigation and communication doesn't work very well with dead people.

So you'd need a way to insulate the interiors from the cold exteriors and you'd need a way to produce oxygen and food/water. You could do both with large hydroponics chambers and a hydraulic system that powers circulation fans and ferries waste and clean water to appropriate locations. Recycling and reclamation technologies would need to be biological, self regulating, and highly efficient.

Is it even viable to continue space exploration without electronics? Using human brain (crew) and mechanical devices and (if possible) chemical mechanisms?

Frank Herbert's Dune outlines a precedent for this. While it not completely denies the existence or function of basic electronics it establishes a strict rule against Artificial Intelligence: "Thou shalt not make a machine in the likeness of a human mind." This chief commandment then in turn leads to the development and perfection of "human computers", the Mentats, claiming to being superior to the ancient thinking machines. One way to make space flight work is to replace simple electronics by other means, say pneumatics to control machinery, and have the "heavy computing" for navigation and telemetry done by improved human brains.

Going even further, the Spice, a substance to extend the human consciousness is used by the Guild Navigator for a heightened awareness and a prescient ability to see safe paths through space-time, thus allowing to navigate in space.

I will argue that in any case the power of the human brain (expanded consciousness or not) if harnessed properly beats steampunk mechanisms for any advanced calculations.

Mechanical computers exist - assuming that the calculations are standard, you'd likely have standardised mechanical devices meant to do parts of calculation and do the rest by hand. Navigation/position taking with starcharts (which is where it gets complicated. these things would be bulky and depend on your region of space, and sextants for taking readings).

I like the idea of charts and a whole rack of numbered curtas - you have a manual telling you which ones to use and you'd basically start with #1, do calculations, pass on the values to a second and so on.

Something worth considering is the classic starships were small and cramped. Having to carry charts on paper and mechanical calculators might be something plotworthy, Perhaps having your navigator's quarters described as 6 walls of chained down books, and a wall of mechanical calculators, kept in zero G for easy access

This is the computer that was actually on Apollo 11. It had 32k BITS of ram (not bytes! bits!) and about 600,000 bits of ROM (permanent memory, equivalent to a hard drive.), which is the same amount of information as about 50 pages of a printed paperback novel. You're not loosing that much by leaving it at home. All the math and calculation for that mission were done ahead of time.

As for communications, there were definitely radios before the transistor, and people did plenty of navigating by the stars while not having the technology of, say, metals.

In addition to strictly mechanical computers, there are some other possibilities. There are vacuum tubes. These can generally handle a significantly higher surge current than a tiny silicon chip, so perhaps they could be tough enough to handle the 'field' of your engines. Then you could basically say that vacuum tube technology has advanced so far, and set your computational abilities any way you like.

Also, there were computers that run on switches and relays. These are called electro-mechanical, and their design would make them even more resistant to the engine 'field'

You want to investigate RUSSIAN science fiction from the 1950s. Isaac Asimov had some good translations of some of it that I read once... the Russians used mechanics the way we used electronics. Where we would have radio signals to communicate between Mars and Earth, they had high-speed rockets carrying cans of microfilm. Mechanical television is possible (British had a working model of that just before RCA made its big electronics breakthrough). There's a bunch of other examples I've heard of. So I think the answer is "yes, certainly."

7
What about electronic warfare?
6
Could a 19th century space gun be of any use today in space exploration?
7
What are dangers of long space travel?
5
Space Age without Enlightenment?
16
Possibility of airless spaceships being used for manned space combat?
6
Space Combat - Electronic Warfare viable alternative to real weapons?
5
How much ice do I need at 0.79c to protect my megastructure
18
Ancient space exploration