The bonegrass fields are full of other life, despite their dangers. Lots of insects, some birds, and even a handful of reptiles have adapted to the paralytic nature of the air in order to reap the rich rewards offered by the deathly white foliage. Of all of these creatures the most advanced by far are the fleshmoles.

Rather than adapting to the neurotoxins emitted by the plantlife the fleshmoles (actually a branch of naked mole rats) have an alternate strategy:

Fleshmoles don't surface unless there is prey that has been ensnared by the bonegrass, and even then they tunnel directly up through the ground into the flesh of whatever has fallen (causing excruciating pain if the prey hasn't already died). They're adapted to deal with high CO2 concentrations and the noxious atmosphere of their underground hives (A matriarchal eusocial structure keeps fleshmole colonies together), but of course occasional O2 injections are required.

To this end weak or old fleshmoles are driven to the surface, where they take a huge lungful of air, become paralyzed (neatly plugging the hole and removing the paralytic agent from the air they breathed in), then are dragged back down and rapidly consumed by their brethren. Fleshmoles also burrow into the chest cavities of larger prey in order to suck down as much O2 rich flesh as possible.

The question is this, given that I'm not particularly hot on my rodent biology:

Is it possible for such a colony to maintain a workable O2 supply, given that they're fairly well optimised for high CO2 life?

For mammals... this could be a problem.

A pretty average human being(62 kg) uses about 550 liters of pure oxygen per day(at sea level pressure). So call it 9-ish litres per kg.

A single naked mole-rat is about 35 grams.

They're extraordinarily long-lived for a rodent of their size (up to 31 years).

Your colony still needs 2.7 litres of pure O2 per day or 13.5 litres of normal air (20% oxygen) assuming they use it perfectly somehow.

From this we can conclude that this is not a workable strategy:

weak or old fleshmoles are driven to the surface, where they take a huge lungful of air, become paralyzed (neatly plugging the hole and removing the paralytic agent from the air they breathed in), then are dragged back down and rapidly consumed by their brethren.

They live too long, their lungs are too small and it's just not gonna work. They couldn't provide a tenth of the air needed even with generous assumptions.

But if I remember correctly you talked about how your victims are left alive. The air in their lungs is not a good option, it's contaminated by the spores just like the outside air.

So let's try another option. 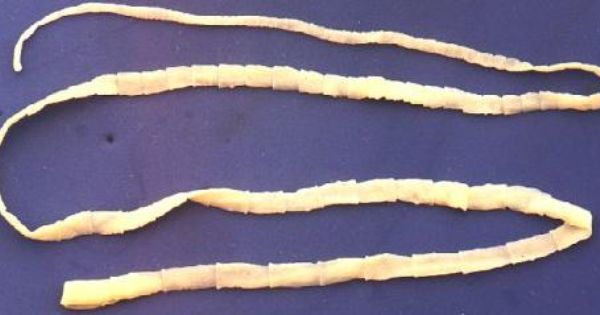 Real paracites need oxygen, how do they get it?

They absorb it from their host, often directly from the blood. Your victim has a perfectly good set of lungs and they're going to be alive for quite a while (longer if nothing burrows into their lungs).

So your moles could be adapted to burrow into the flesh (careful not to cause lethal harm), find big arteries close to the heart/ lungs where it's rich in oxygen and then filter lots of oxygen from the blood and to somehow feed it back to their kin bellow using the victim as a living oxygen filter.

Perhaps, if desperate and lacking prey for a long long time, the moles might sacrifice one of their own to use the same trick: one of them breathes while the others filter oxygen from its blood below.

This leads on to some grim conclusions.

It's going to be in the moles' interest to keep the victim alive for as long as possible.

Too much bonegrass growing up through them will kill too fast. So the moles could be chewing away the roots of some of the young bonegrass to keep it from killing the victim quickly. The bonegrass wants to kill you fast. The moles want to keep you alive for as long as possible.

Indeed, weirdly, if they have access to lots of calories but not much oxygen it could be in their interest to feed sugars into your blood while taking oxygen out.

To stop you dying from infections they might even release antimicrobials as they chew into your flesh.

They also might carefully feed on fatty tissue, avoiding blood vessels, again to keep their victim alive for as long as possible.

There are some far more practical options for filtering air... but they're not as fun as absorbing it from the blood of still living hosts.

Now, there's also another possible use for your victim. A nice warm place for baby fleshmoles and similar parasites to grow.

Here's a species of wasp which lays its eggs inside still-living hosts. 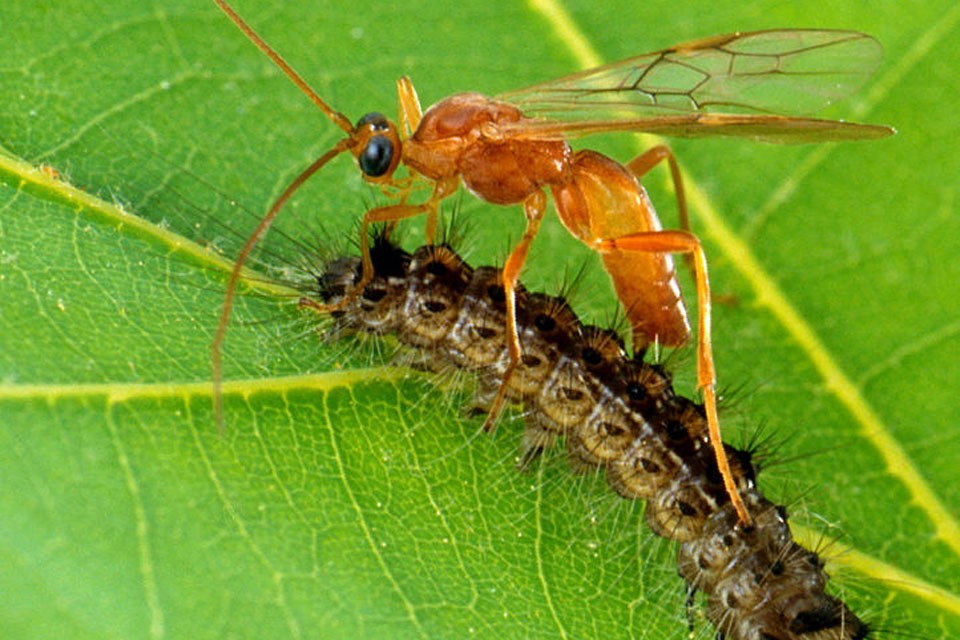 Some wasps have an even more disturbing effect on their victims.

Once the babies have eaten their way out through the hosts flesh the host's behavior has been altered by the parasite and the caterpillar spends the remainder of its life trying protecting the parasites.

So for added creepiness, imagine someone getting paralyzed, fleshmoles eat through their flesh but before they die the wind changes direction, the amount of paralytic poison decreases and they make their escape.

They have a few baby fleshmoles under their skin but rather than wanting to cut them out and destroy them the host feels a strong compulsion to care for them because the fleshmoles have released a hormone that hijacks the normal instincts to protect your children.

Someone is rescued from the bonegrass and the fleshmoles. The town rejoices. But the following week they're found carrying around a blanket filled with a squirming mass of infant fleshmoles treating them like a baby and feeding them chunks of raw meat.

They would most likely arrange their burrows similar to how terrestrial burrowing creatures do so that there is enough air-flow through them to survive. Perhaps they even have "breather" tunnels that extend away from the grass fields and allow fresh air to flow in even when the grass starts spreading toxins.

The moles could have a hibernation-like state when oxygen drops too low or toxin levels too high. Effectively they become dormant and conserve their oxygen until the event passes and the fresh air from their breather tunnels wakes them up again to continue their lives.

If they're subterranean they wouldn't disturb the grass and trigger the toxins the way a passing surface animal would. Also the air in their tunnels would have been filtered by passing through the relatively porous ground above them making it potentially safe to breathe.

Or:
If they've evolved around the bonegrass they're largely immune, but they do need to take a nap if a large animal triggers a lot of toxin near an open tunnel. Much like the grasshopper mouse and the scorpion, or the mongoose with snake venom.

Once you start introducing other creatures also living on the bonegrass victims then your fields are going to need to be quite bloodthirsty.

Since you mentioned CO2, I'm guessing you are using this answer from Tim B.

If so, then think of dolphin moles. To store up large stores of CO2 while still being able to breathe may require the bone grass to go on a crazy oxygen converting frenzy. This would create an abundance of outside oxygen while the plants stored up CO2. Only during this time do the moles appear for air. The bone grass has learned to ignore the moles as the miles always disappear before they can pump out sufficient CO2. The mole dolphins don't have to surface for a while and are alive and well. If you want the moles to tunnel into people's lungs, it would be a bit impractical as the person collapsed because it has too much CO2... Perhaps this is what the mole eats?

Also just a side note. The CO2 could be used as a defense against fire. Whenever you try to light the bone grass, it suffocates the fire!

This is actually a real issue for termites. I know someone who studies this question - How do termites ventilate their mounds? After all, a bunch of termites live underground. I can't find a source now, but if I recall the biomass of a termite colony is comparable to that of a sheep - not warm blooded, but still that's a large O2 requirement.

Let's think about the pollen. It gets carried by the wind, but it is heavier than air, so it doesn't get very high. In fact it's in the evolutionary interests of the grass to select density (and shape) such that the concentrations are highest in the level of the terrestrial animals walking around. So the pollen cloud won't get much over 6 feet high.

Your moles have a few big termite mound-like structures in the middle of the field. The mounds exchange air from within the chamber and above the layer where the pollen lies. They can even come to the top, meerkat like, and look around for where some victim has fallen. Then they tunnel over to it.

Perhaps instead of them getting the oxygen from only their victims, they also have some kind of filter in their lungs that filters out CO2 and let's only oxygen in. However, over the life time of the mole, the filter degrades, eventually to the point where it cannot keep itself alive. Then it is out out to pasture.

But why skip out in a good meal? More oxygen can be found in the blood of their victims, which means they don't have to waste filters during feeding time. Which means eat the lungs and arteries last, so they can provide you with oxygen while you burrow through the victim's living flesh. Even if the creature hAs inhaled a lot of CO2, it still takes less filtering and is nice and yummy for the flesh moles. And when their brethren become to old to efficiently filter out the CO2, it is time to feed...

Because fo such creatures you just can't get enough oxygen by simply draining it from the living blood.

Your beasts' should be a sustainable ecosystem for bacteria that make O² out of byproducts produced by your beasts.

There's a bacterium that does that, it's called Methylomirabilis oxyfera, it eats methane and oust oxygen, perhaps this kind of bacteria can live in your beast's digestive system consuming methane and producing oxygen so your beast would fart oxygen and breathe it in :D

17
Can we breathe the moon's crust?
30
How to Breathe Both on Land and Under the SEA
4
genetically engineered humans breathe underwater at extreme depths
4
Would someone who doesn't normally breathe nor have heartbeat, breathe in order to calm themselves down?
6
Is it Possible for a Biological Creature to Spew/Breathe an Explosive Instead?
8
How would a cephalopod-like race breathe outside of water?
0
Can you breathe underwater with fluid-filled lungs?