Character must escape from a CERN/DARPA-like facility - Secrecy

This story is meant to be an introduction and background for a short videogame I'm working on.

Our hero works at a secret, hidden facility. The secret is kept among every staff member working there. The involved parties are mostly scientific staff and engineers, but also military staff from countries like USA, EU members, and some Asian and pacific countries (say, NZ, Japan, South Korea—basically, if your country signed stuff like the TPP, your country is in).

The main motivation for the facility is warfare/defense, and so research and development is oriented to build weapons or technologies useful in (conventional) war, quantum computing, chemical and biological warfare, nanotechnology, space exploration, and new energy alternatives (this involves deeply studying quantum mechanics and even further research about the possibility of harnessing zero-point energy).

The technologies developed there were not ready for immediate use, but since Al Qaeda/ISIS have managed to survive and increase their influence, the people at the facility are preparing themselves for the worst (since drones do not seem to be useful now).

The main technology under development was called the Time Wheel, which was named after Carlos Castaneda's work about American shamanism. The "device" is a predictor which would produce highly precise information about the possible outcomes of courses of action at a macroscopic level. The study of quantum coherence and superposition is taking place at a level never reached before. The actual technology involved and experimental mechanics are kept highly confidential (even to the main game character, who never trusted these reckless, political-influenced initiatives).

Our hero was worried since he knew about some new actions taken by the whole facility:

However, in a huge facility, secrets spread faster than Wikileaks, and the Time Wheel experiment was no exception.

The facility is geographically isolated, and our main character, like most of the staff, lives in temporary residence there (they can return to civilization for holidays or work rotation). He cannot communicate with the outside, except for authorized phone calls (that are likely monitored by the facility's security). His computers are likewise monitored: forget about free-access internet. He learned about the Time Wheel experiment few days ago from gossip among the other staff members. He feared for his safety, but was unable to leave the facility. He also could not allow other staff members to learn that he knew about the project, since he could be jailed (or even executed without trial).

How plausible is it that the experiment was kept secret from a big part of the staff, but that somehow someone was able to leak that information to the hero inside the facility?

Dr David Robert Grimes, a physicist and cancer researcher at Oxford (and also a journalist) published a paper in January this year discussing precisely the idea of whether a large-scale conspiracy is feasible - and his conclusion was that it is not. To summarise, he devised a mathematical model for conspiracies involving multiple actors over time. The model predicts that conspiracies involving more than a thousand actors "quickly become untenable and prone to failure."

I'll borrow one of his figures to illustrate the model's estimation of the lifespan of a major secret, given a certain number of actors:

I'm a poor statistician, so I won't attempt to explain his work in greater detail, but he essentially proved that conspiracy theories on the scale you're talking about most likely cannot exist in reality. While you could suggest that your fictional facility/organisation takes measures that have not been attempted in reality so far, I would consider the precedents discussed in the paper fairly convincing. He gives the following examples of some very serious real life conspiracies, the number of people involved, and the amount of time it took for them to become public knowledge: 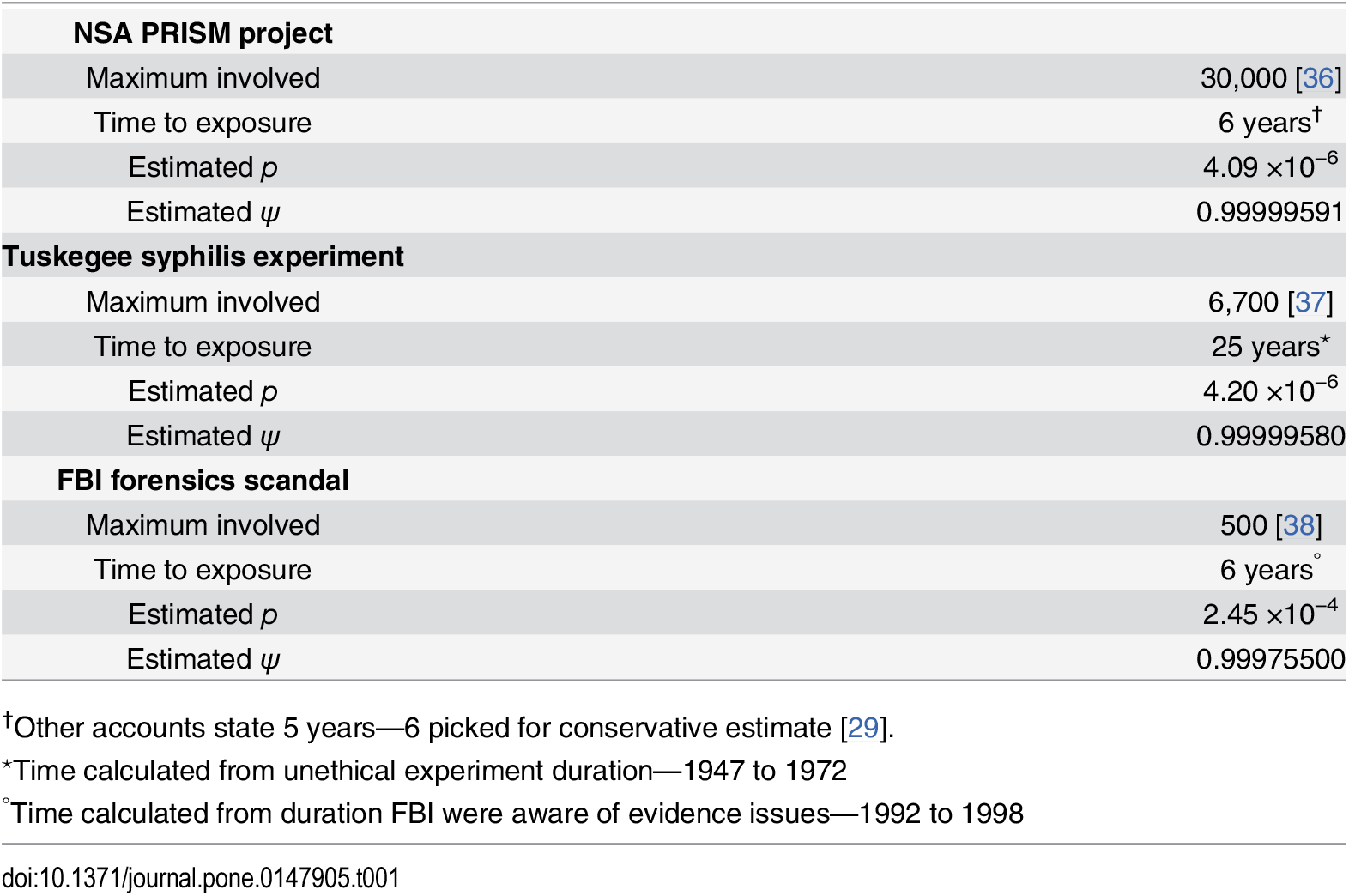 In other words, to answer your question directly, given the timeframes predicted by this model it is not plausible that the secret could be kept from the staff, or even the public, and it is highly plausible that the protagonist, given that he is already inside the organisation would find out about it. As for his chances of effecting an escape, that's very much the domain of fiction, however. Although, it sounds like your hero is being kept in conditions less secure than a supermax prison, given that he is not confined to a small cell, and has a certain degree of liberty within the confines of the facility - and people have escaped from maximum security prisons, even while confined in solitary cells, and even while they were known to be and treated as the greatest possible security risk.

Well, nobody trusts no one, so usually you don't even know exactly what happens in the laboratory next to you. Of course no one told you, but there are microphones and cameras all over the place. Not 100% coverage, and someone still has to check the tapes, but you should not take the risk. After all, would anybody on the outside really note you're suddenly... silent?

I think it would be feasible to keep such an experiment secret, as long as the whole facility is about secret experiments.
Also, as mentioned above, you can install surveillance-equipment everywhere, together with signs on every greater cross-section reading "Always remember, mind your own business!" or Please remember: All your work belongs to Black Mesa.

All of this doesn't work completely (of course). There is always a person who hints how unbelievable more dangerous their work is (and, because of this, how cool they are). Maybe they talk to a colleague from the same lab at the neighbor table at the canteen. It doesn't have to be clear, but maybe one of two researchers is worried something might go wrong with the new Super-condensator and the feedback-loop they induce in the (alien?) crystal. Worst case scenario: A radio-active EMP, or maybe a burst of strange particles.
Your character, smart as he is, hides in the already mentioned lead infused Faraday-trap (LIFT).

On a side note: You should grab Half-Life (sometimes cheap on Steam), it reminded me extremely of that. Hence the Black-Mesa reference.

How plausible is it that the experiment was kept secret from a big part of the staff, but that somehow someone was able to leak that information to the hero inside the facility?

The experiment itself is not a secret. It is "The main technology under development". One of many weird spooky projects going on. The department has a sign that states "Project Time Wheel".

Neither is it secret that people are signing restrictions on their civil liberties. Wartime, etc etc.

The secret thing is that Time Wheel is freaking way dangerous. More than the bioweapon monsters, more than the quantum bombs. The danger involved is known firsthand to one person who survived (temporarily) an accident during a beta test of Time Wheel. Maybe even the people who cleaned up the accident are not entirely clear what happened; they might think it is equipment malfunction or something else. The victim is the person who told the hero. The hero might be the only one who knows the truth.

25
How do I recruit members for a secret society?
2
Can a main-sequence star with planets exist orbiting a magnetar?
6
What will be the consequences of opening secret-research facilities to public (e.g. Area 51)?
35
How can a secret, murderous cult remain secret?
2
Geopolitical consequences of a secret peace-keeping organisation backed by the UN Security Council?
3
What Should the Size of These Secret Superhuman Organizations Be?
6
How large could a population of supernatural beings be and still be plausibly hidden?
15
How would a secret tunnel be kept entirely secret?
8
What is the simplest set of rules a masquerade can have to maintain history as we know it?