What does it take to make a permanent blindness gun?

One of the many things I'm afraid of is the existence of lasers that cause permanent blindness. I know that it would take a lot of energy to melt someone's face or cut off limbs like in Star Wars, but the idea of simply shining a light at someone to the point that they can no longer see, forever, seems way more possible/plausible to me. I can imagine battlefields of the future where soldiers on both sides are afraid to look out beyond no man's land for fear of never being able to look again. Luckily, it seems like no one has built a gun specifically for this purpose.

That said, I want to know how.

So that's what I'm asking: can you create a gun that shoots permanent blindness lasers, and if so, what do/would you need? For some parameters, let's say it's effective at 50 meters, on unshielded targets that are looking directly at the gun. It should work fast enough to not be foiled by blinking. Aside from that, I'd appreciate optimization to size, range, accuracy, and acceptable deviation angle of target's field of view.

Laser eye safety has to do with intensity of the beam.

Lasers come in different classes based on intensity, and how dangerous they are:
Class 3R: Safe with limited beam viewing. Prolonged exposure has a low risk of injury.

Class 3B: Class 3b lasers can cause severe eye injuries if beams are viewed directly or specular reflections are viewed.
Diffuse reflections (non shiny surface) are safe to view. A Class 3 laser is not normally a fire hazard. Example: visible HeNe lasers above 5 milliwatts but not exceeding 500 milliwatts radiant power

Retinal injuries can occur instantaneously with Class 3b and Class 4 lasers; the damage may be irreparable. Corneal burns from far-IR and UV lasers may also be irreparable. Class 4 beams may be of sufficient power intensities to penetrate through the sclera (white) of the eye and damage the retina and other structures; thus, turning one's head or not looking directly at the laser offers little or no protection to high power lasers. Lenticular damage may also be caused by the beam and by photochemical reactions from exposure to UV and blue frequencies.

So, you'd want either a class 3b or class 4 laser.

Here's a class 4 hand held laser for $200.
It has a max beam visibility range of 72761 meters, though the blinding effect is probably half that.

It really wouldn't do a lot of good though, since laser safety glasses are available even at these intensities, and if side A started using blinding weapons, side B would just issue safety glasses along with helmets and flack jackets.

Found an answer to my question from the other day...
there are temporarily blinding laser dazzlers which can be used in crowd control and war situations, and are legal under the 1995 United Nations Protocol on Blinding Laser Weapons.

Wait, you mean to say there is a way to hurt and harm humans that is technically feasible and is not in service?

Nope, we have them: 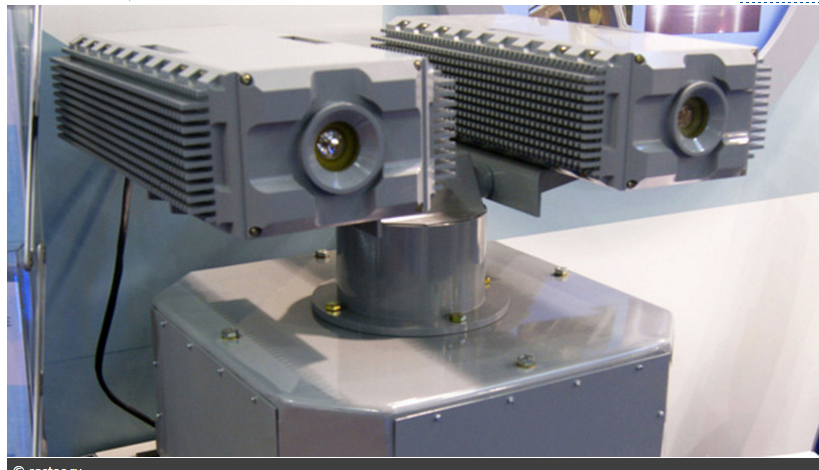 The device, officially called a “visual optical jammer station Grach,” was revealed this week at a military expo in Kubinka near Moscow. It’s a remotely-controlled device with two to four projectors that produce light intensive enough to suppress enemy sensors and cause temporal blindness in humans.

The projectors radiate light in the infrared and ultraviolet ranges of the spectrum, which means they affect devices such as thermal visors which rely on such wavelengths. Grach is intended to provide cover for troops during firefights and hinder enemy reconnaissance. It can also be used as a regular searchlight and to send light signals large distances.

Not the answer you're looking for? Browse other questions tagged science-based weapons near-future or ask your own question.

7
Trying to make a gun making scene realistic
17
How to make a Sound Gun
16
Can medieval people make a potato gun?
9
How would the rules for carry and use of weapons be affected by reliable stun guns?
3
Would hunting be affected by existence of a stun gun?
11
What earth conditions would make a permanent bronze-colored sky?
5
How to make an Immobility Gun
4
What conditions would make a permanent turquoise sky?
7
What would it take to make catapults a alternate way to travel?