How to make an Immobility Gun

Everyone knows how when there is a big enough vibration, say a 3.0 to 4.0 earthquake, it gets hard to stand. Well my question is, could it be possible to create a weapon that, when pointed at a target, will make the ground under the target vibrate to the point where it gets hard to stand, thus immobilizing any biological targets in the area. And no, it won't vibrate that fast, otherwise we'ed have a "Flash Gun." (The ground would vibrate so fast that the target would fall through the ground)

If this is possible, how big would it be?

Could it be compacted, into say, a gauntlet?

Would it be possible to create a countermeasure for the gun or gauntlet?

Ok so the idea is to vibrate the ground underneath the target to the point where they are unable to stand properly.

Using your research it would require a 3 to 4 richter earthquake to cause this to be effective.

So, you need to create a localised earthquake of up to richter 4 in order to destabalize a person to the point where they cannot stand easily.

So far, I'd say potentially not possible, however ima go with it anyway, it sounds cool.

Initial thoughts: - Not going to be widely useable. If you were to use this in a populated place the area of effect would probably cause a lot of collateral damage, probably damaging property and possibly actually hurting people, which based on your question is not the intention. It would likely be limited to use in open unpopulated areas, meaning it is not widely deployable.

Here I'll include a sketch if I can: 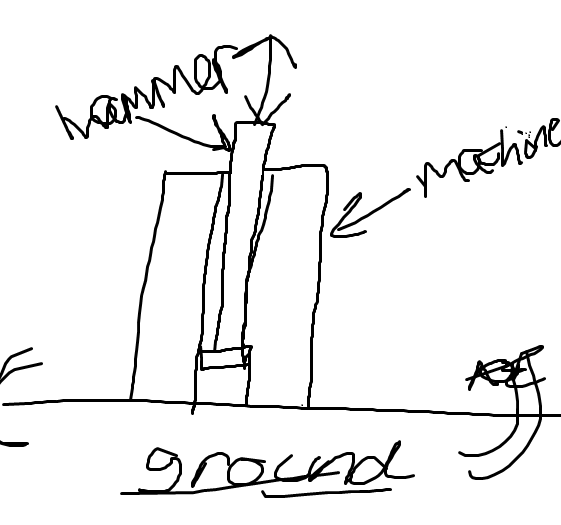 Ok so terrible sketch included, this would be my idea.

My thought process is that this is parachuted in or something and dropped into a warzone. This would initially cause an impact, staggering nearby enemies, but the main purpose of this drop is to set the machine in place so it does not fall over etc. The hammer would then raise (or maybe it would be raised before drop) and would drop as hard as it can (maybe with weights attached etc) and create as heavy an impact as possible, I'm not sure what kind of impact you would need to make that kind of scale of impact, I'm better at ideas than actual straight up calculations but hey, I'm sure you could do it.

The impact would then cause a short but intense shockwave, easily staggering everyone nearby depending on scale of the hammer impact.

As for specifically your idea of a continuous earthquake, I don't think it would be possible.

Then for the miniaturising of this, again no idea, maybe a sort of gauntlet with rocket boosters, similar to the Gypsy Danger Pacific Rim rocket punch, but the impact would likely be far less in terms of magnitude, and the shock reverberating back at the user could cause serious damage to the user I'm not sure, I don't have the knowledge to give you an accurate prediction there.

It might be possible, in a way. Sonic weapons are real. But it won't work the way you envisioned.

Sure, you can make things shake. But well before the ground will start to shake, you will be directly shaking bones of your victim. No one will use more energy than actually needed, so they'll stop at that.

How big would these weapons be? Current ones are vehicle mounted and that's probably not going to change - you need size comparable with the wavelength you want to create, and infrasound wavelength is in the 10 meters order of magnitude. No feasible way around it, not as far as we know.

Please note that weapons that cause unneeded suffering may violate Geneva Conventions of 1977. Breaking someone's legs when you can just shot him with sleep drug probably would count as such. Using your weapon would make user a war criminal... or would require effective lift of torture ban. Either way, consequences would be serious.

This would be an exceedingly difficult weapon to build as it would have to be able to send a shockwave over a large area. If you were to build one following your sketch you would have to take into account the ground density. weather the surface it is placed could disperse the vibrations effectively and the sheer forced required to make the ground shake enough to measure moderately on the richter scale. A more mainstream way of creating a simulated earthquake would be to detonate a high powered explosive deep beneath the surface of the earth (Which would be hard enough on it's own).

However if you just wanted to create a weapon that could safely immobilize an enemy couldn't you just use a taser. But if you wanted to immobilize a large group of enemies all you need to do is create a sort of lightning rod with enough electricity going through to make it arc towards any nearby object. Although it couldn't be put into practical military use it would be an effective way of immobilization.

Or if you had enough power (Politically And Physically) you could create a forced earthquake by simply pushing tectonic plates towards each other. by using pistons and stuff. (It would be a really cool futuristic war weapon and really expensive)

You could also set off an explosive mid-air. Like when you watch fireworks you feel yourself/The ground shake. You could easily recreate that but on a much larger scale.

Not the answer you're looking for? Browse other questions tagged science-based technology science-fiction weapons science-in-society or ask your own question.

14
Radiation sudden stop
7
What does it take to make a permanent blindness gun?
4
The ultimate weapon from nowhere
3
Effectiveness of firing a projectile from orbit to hit a human target
39
How to realistically create a bow that's also two one-handed swords?
16
How could a Great Chasm be created?
6
What subatomic particle is best for a particle accelerator gun?
6
Is there a velocity threshold that when passed would make a kinetic projectile more than just “piercing”?