Would it be possible to use the earth's rotation to launch spaceships to other planets?

So my question is just how feasible would it be to build something like that and use it to launch ships on their way? By picking the right launch window you could send ships to anywhere in the solar system for virtually no fuel usage.

Yeah, this works in theory.

In fact, there is at least one paper discussing the required radii to achieve specific lunar orbits (photo above taken from that paper).

While the ship could get to its target without fuel, it can't land and it can't have any targets that are outside of the Earth's equatorial plane at the time of launch. It also takes a little longer, the insertion into low lunar orbits shown above take about 279-321 hours (11-13 days). This is about four times longer than Apollo 16, which took a similar path.

How long would the tether need to be?

The point at which the ship is released will determine the target it can get to. Research suggests that a space elevator need to be at least 53,000 km in height to get away from Earth, but would have to be 107,000 km in height for a ship to release and reach Jupiter.

A theoretical carbon nanotube based cable could indeed reach well beyond the 107,000 km height required to launch ships to Jupiter. Some estimates (same paper) put the maximum around 144,000 km.

What would the g forces be at the end of the tether?

I calculated the g-forces along a space elevator in this answer.

The apparent gravity felt from the Earth as one travels up a space elevator is given by:

Where $G$ is the gravitational constant, $M$ is the mass of the Earth, $r$ is the distance from that point to Earth's center, and $\omega$ is Earth's rotation speed.

I plotted this as a function of distance from Earth's surface. Down at the surface gravity is normal, shown here as -9.8 $m/s^2$. 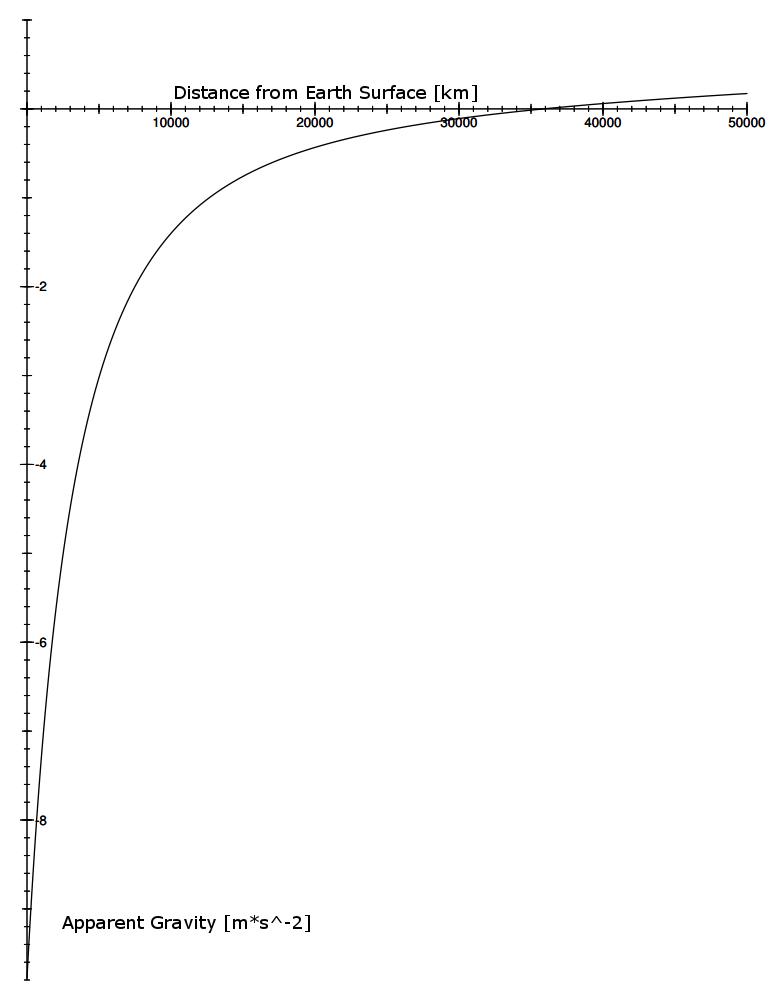 As you can see the apparent g-forces drop off rather rapidly. The acceleration at the end of the cable is negligible. Acceleration (outside of that apparent from Earth) is only occurring as one climbs the cable, because the rotation speed is constant.

Is it within the realms of material possibility or just ridiculous?

It is theoretically possible. The maximum tension for this launch system occurs at the geosynchronous point (the zero crossing in the above graph). Carbon nanotubes can't be made in large enough quantity, quality, and bonded length right now but these problems due to our current technology, not fundamental impossibilities.

Not the answer you're looking for? Browse other questions tagged space hard-science space-travel or ask your own question.

6
What forces should I consider for my hotel room on the Space Elevator?

6
What way to go about interstellar colonization is likely to be the first one technically and monetarily feasible?
1
Cargo-cannon delivery system from Earth to Moon?
13
A weapon(preferably hard scifi) that will limit velocity of space ships in a wide region temporarily
0
How high does a tower have to be, so that centrifugal force launches a payload into space?
14
How fast would a Martian space elevator travel?
3
Of all methods of FTL travel (or as close as one can get to it), what would be the most feasible to have been invented in the next 100 years?
4
Building an interstellar starship during transit
6
Intermediate Structures Along a Space Elevator
2
The most efficient spaceport