What atmospheric pressure and temperature are reasonable to maintain water on a low gravity planet?

I'm designing a low gravity planet, and I want it to be as realistic as possible. I've calculated the lowest mass and radius it could have while maintaining a similar density to Earth and while still being of sufficient mass to maintain a long-lived internal dynamo and magnetosphere.

So, this planet is low gravity but is capable of holding onto an atmosphere.

If I want the air pressure to be lower (maybe like 0.5 - 0.7 atm), what is a reasonable temperature that would both make sense for low air density and also not result in the evaporation of the oceans? I was thinking lower air density would result in lower temperature, which would also prevent the oceans from evaporating. Would average equatorial temperatures in the 70s (F), with snowy poles make sense if I want to preserve liquid water?

This is entirely dependent upon temperature. Here's the basic diagram, from Wikipedia: 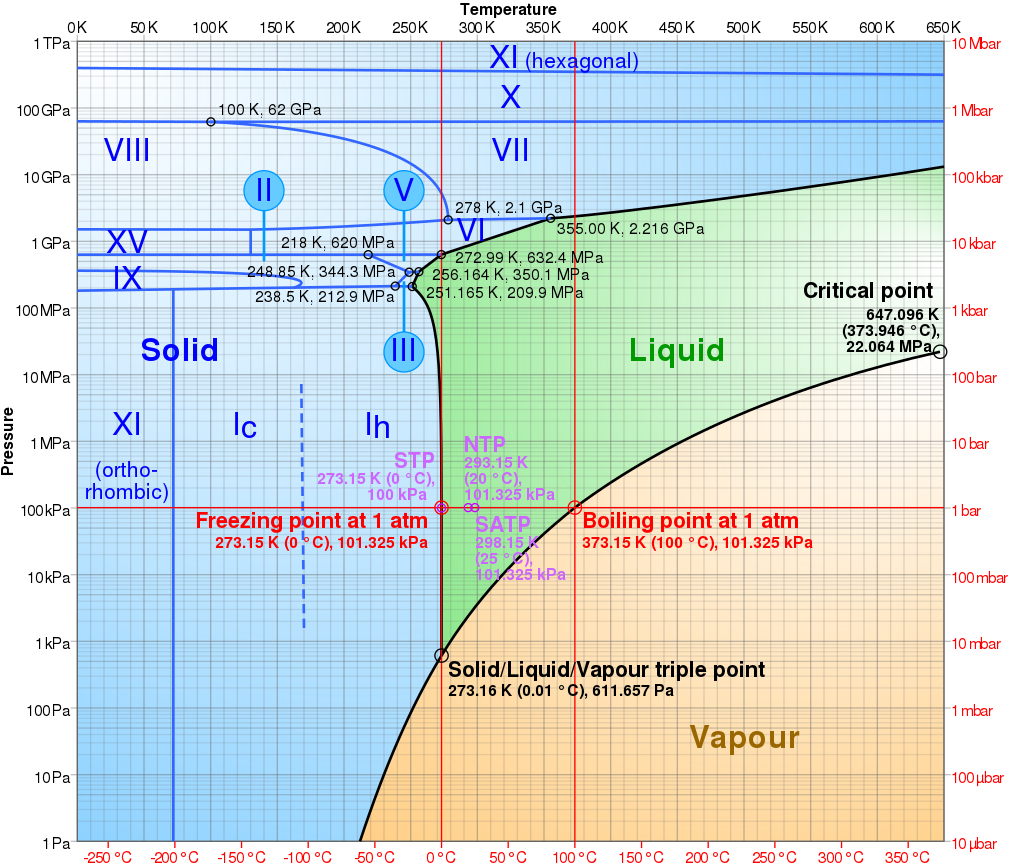 If there is enough light hitting the surface from the nearest star to melt it, and there is no available atmosphere, then the water will turn directly into a gas until the atmospheric pressure hits the phase change point for that temperature.

Without a strong magnetic field, the solar wind will dissociate the hydrogen from the oxygen, blowing the hydrogen gas out into deep space. Some of the oxygen will stick around, but most of it will react with available rocks, turning into carbon dioxide, iron oxide, and similar compounds.

With a strong magnetic field, you'll still get the dissociation and oxidation, but the planet will hold onto the atmosphere for longer, allowing it to build up to adequate pressure.

So your answer strongly depends on how close the planet is to the star. If you presume that it's in the goldilocks zone, then you could still have liquid water at 1% of Earth's atmosphere. A lower air pressure would be associated with a higher temperature, expanding the surface area of the outer atmosphere and increasing available energy. This would allow more of the atmosphere to escape before it can accumulate.

As low as 0.5 atmospheres, the boiling point of water is still above 80 degrees C. So yes, equatorial temperatures in the 70s Fahrenheit (20s Celsius) are fine, as far as keeping the oceans from boiling.

But, as mentioned in the comments, some amount of water will evaporate at any temperature. That's what humidity is! And if you want to keep your oceans from evaporating into space, you need to worry about the temperature profile at altitude. Earth does not have sufficiently high escape velocity to retain water vapor, and certainly not hydrogen--but it has a mid-altitude cold trap which prevents the vast majority of water from rising to heights where it can be photodissociated or directly lost. As a result, Earth still constantly loses some water to space, because some water vapor can always wander up to the top of the atmosphere--but only about a millimeter of ocean per million years.

Having lower gravity actually kind of helps, because it increases the scale height of the your atmosphere--as long as you have a cold trap at all, it will be a physically larger region, which will be more effective at condensing all possible water vapor--and you'll have more atmosphere above it.

Having a lower starting pressure does hurt you, insofar as there is less "room" for air to decrease in density with altitude, and thus undergo adiabatic cooling as it rises. Earth's atmosphere hits about 0.5 vars of pressure at around 5.4km altitude, with an average temperature around -10C, while the coldest temperatures (about -60C, where the vapor pressure of water is only a few pascals) occur at about 14km. If you just took Earth and its atmosphere and cut out the bottom half bar, you'd be asking for a much stronger adiabatic lapse rate to go from 20-ish C down to -60C in a mere 8.6km rather than 14km, but that's where the larger scale height comes in. With a deeper atmosphere to work with, you're probably OK. But, well... predicting the exact structure of atmospheres is hard! You'd need to do some significant computational modeling to be 100% absolutely sure that your oceans won't evaporate too fast.

So, 0.5 atmospheres is probably fine. 0.7 would be safer. But either way, it will depend on the detailed atmospheric structure.

22
Reality Check: Habitable moon around earth-like planet
8
How humanly survivable is my world?
7
Reality Check: Planet with low gravity and water vapour
4
How does composition change if you extend an Earthlike atmosphere 50km below sea level?
10
How could a breathable ultra-high pressure atmosphere form?
4
Weather for a dense-atmosphere water world
4
For a planet with a given equilibrium temperature, what is the maximum pressure possible?
2
How might a lower gravity planet sustain a warm, earth-like atmosphere?