Multiple moons with little effect on the planet

In general, I'm considering having my planet have multiple moons but at different points in its history, the count of the moons increase or decreases (like every few thousand years a moon comes or goes)

Is it theoretically possible to have visible moons small enough that they do not have a [significant] impact on the tides or other factors of the planet?

I'm not planning on having more than three at any given time.

Depicted: our moon Luna and the moons of Mars Phobos and Deimos. 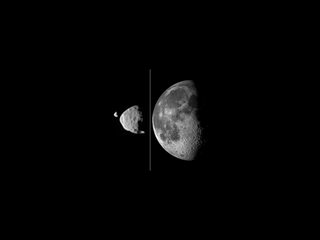 The moons of Mars are 10 times closer to their planet than Luna is to us. Both Martian moons have a mass in the 10^15 kgs; Luna has a mass of 10^24 kg. The moons of Mars are small; asteroid sized. And they might be asteroids that got trapped in Mars' gravity well. Our moon Luna is bigger and not an asteroid.

As regards tides, any mass will exert tidal forces but the moons of Mars are unmassive enough that the forces they exert are small compared to the force Luna exerts.

Your planet could capture asteroids to be its temporary little moons. Small masses orbiting close are fine moons. How exactly these moons then leave is a different question - although Phobos coming down from orbit at 2km/s will pack less of a wallop than the comparably sized but 20km/second Chicxulub asteroid I have to think it would still be a big deal on the surface when a little moon comes down.

I agree with Willk's answer citing Deimos and Phobos as reasonable candidates. As you mention wanting the moons to come or go every so often, I wanted to note that Earth has or has had a couple of low-mass "temporary satellites", bodies which typically orbit the Sun but may briefly move into orbit around the planet. 2006 RH120 is perhaps one of the best-known; though it normally orbits the Sun, it did orbit Earth for about nine months between 2006 and 2007.

Such temporary satellites would almost certainly be small enough to have little effect on the planet - asteroid-sized or smaller. Both known temporary satellites of Earth (the other being 2020 CD3) are on the scale of meters, but it stands to reason that something like Phobos or Deimos could also be temporarily captured (and you'd need it to be that size to have a shot at it being visible!). The other major difference is that the timescales you're looking for (millennia) are longer than the time these objects spend orbiting Earth, but I wouldn't bet against that being possible.

If the moons are of size of mentioned Phobos and Deimos, or even little larger, and close enought, they could serve this purpose.

If there are not such big oceans as are on Earth, the tidal waves would be also smaler. (Not only sea have tidal waves, every lake or even glass of watter have them too, just insignificant :)

There may be a lot of large asteroids in your system, and the Earth can catch some of them sometimes, with either just temporally (they do few unregulars ways around and then are catapulted away again), or more permanently (like a Moon). But having so much of large asteroids, there is still possible, that some of them would approach the "stable ones" and draw them away again.

There would be needed a lot of handwaving about probability to approach just the right ways, to be near enought but not collide, but well, with just of a lot of luck, why not. (Or if there are any gods/natural magic/whatever whil simply just plays a little with probability and/or affects those asteroids with really small force, but for long time and with "intent and knowledge", it would be possible too) "if there is probability of something 1/1.000.000 it happens 9/10 times"

They don't move from orbit they just hide?

Of course the strength of their tidal effects on the planet will depend on how close or how far they orbit as well as on how massive they are. Presumably different moons would orbit the planet at different distances.

Any permanent moons of the planet that keep on orbiting it for many millions and billions of years would have to orbit within it's Hill Radius.

The Hill sphere of an astronomical body is the region in which it dominates the attraction of satellites. To be retained by a planet, a moon must have an orbit that lies within the planet's Hill sphere.

In the Earth-Sun example, the Earth (5.97×1024 kg) orbits the Sun (1.99×1030 kg) at a distance of 149.6 million km, or one astronomical unit (AU). The Hill sphere for Earth thus extends out to about 1.5 million km (0.01 AU). The Moon's orbit, at a distance of 0.384 million km from Earth, is comfortably within the gravitational sphere of influence of Earth and it is therefore not at risk of being pulled into an independent orbit around the Sun. All stable satellites of the Earth (those within the Earth's Hill sphere) must have an orbital period shorter than seven months

The Hill sphere is only an approximation, and other forces (such as radiation pressure or the Yarkovsky effect) can eventually perturb an object out of the sphere. This third object should also be of small enough mass that it introduces no additional complications through its own gravity. Detailed numerical calculations show that orbits at or just within the Hill sphere are not stable in the long term; it appears that stable satellite orbits exist only inside 1/2 to 1/3 of the Hill radius. The region of stability for retrograde orbits at a large distance from the primary is larger than the region for prograde orbits at a large distance from the primary. This was thought to explain the preponderance of retrograde moons around Jupiter; however, Saturn has a more even mix of retrograde/prograde moons so the reasons are more complicated.2

If some or all of the moons need to be visible as objects instead of mere dots from the planet, the visual acuity of the Human eye will determine minimum diameters that they must exceed (unless your characters are all aliens with different eyesight than humans).

The maximum angular resolution of the human eye is 28 arc seconds or 0.47 arc minutes,[19] this gives an angular resolution of 0.008 degrees, and at a distance of 1 km corresponds to 136 mm. This is equal to 0.94 arc minutes per line pair (one white and one black line), or 0.016 degrees. For a pixel pair (one white and one black pixel) this gives a pixel density of 128 pixels per degree (PPD).

And possibly the mini moons would need to be a few times 28 arc seconds in angular diameter to be seen as extended objects instead of as dots of light.

And if you want the small moons to appear as mere dots of light they can be much smaller.

Jupiter has four large moons, Io, Europa, Ganymede, and Callisto. And if they were farther from the brightness of Jupiter they could be seen by the naked eye, without a telescope. And possibly they have sometimes been seen with binoculars or a telescope.

All four Galilean moons are bright enough to be viewed from Earth without a telescope, if only they could appear farther away from Jupiter. (They are, however, easily distinguished with even low-powered binoculars.) They have apparent magnitudes between 4.6 and 5.6 when Jupiter is in opposition with the Sun,[55] and are about one unit of magnitude dimmer when Jupiter is in conjunction. The main difficulty in observing the moons from Earth is their proximity to Jupiter, since they are obscured by its brightness.[56] The maximum angular separations of the moons are between 2 and 10 arcminutes from Jupiter,[57] which is close to the limit of human visual acuity. Ganymede and Callisto, at their maximum separation, are the likeliest targets for potential naked-eye observation.

The smallest of the Galilean moons is Europa, which has a diameter of 3,121.6 kilometers. The closest distance between Earth and Jupiter, is about 4.2028 Astromical Units. Since an Astronomical Unit is 149,597,870.7 kilometers, Europa can get as close to Eartj as 628,729,931 kilometers, give or take a few million.

And that is a rough calculation, not allowing for the different albedos of different astronomical objects and for the more intense sunlight at Earth's orbit, nor for how much Europea exceeds the absolute miniumum apparent magnitude.

But it does suggest that your small moons should be at least a few kilometers in diameter to be visible even as points of light, unless they are a lot closer to your planet than the outer regions of the Hlll sphere, where temporary moons would usually be expected to orbit.

That would suggest that your planet's orbit would have a lot more fairly large size asteriods with similar orbits than Earth has. That suggests that major asteroid impacts and their effects should be a lot more frequent on your world than on Earth.

Not the answer you're looking for? Browse other questions tagged planets moons .

115
How would having multiple moons affect tides?
9
Predicting lunar eclipses with multiple moons
21
How can a spaceship unknowingly interfere with tides on a planet?
13
What are the parameters of a planet having multiple moons?
2
Planet with 4 major moons, Habitable?
6
Multiple moons but only one of them is tidally locked to its planet?
3
How does having 3 moons change a planet?
11
What factors affect how many moons a planet can have?
4
Secondary moon with negligible effect on planet