What is one change a society of mostly humans would make to coexist with a class of werewolf-like super beings?

I am currently designing a world where there is a species of werewolf-like beings. They call themselves the Amali and live side by side with humans. The two sides are friendly and even have children with one another, the children being just as likely to be human or Amali. In this world, life is generally good, but there is no electricity and few machines.

Here is a list of traits the Amali possess:

While feeling intense emotions, the Amali become beasts more than twice the height of a human. Their jaws and claws are strong enough to rip apart bone. That makes them dangerous, as they are difficult to stop in this form.

Even the weakest Amali has the strength of ten men. They are faster than humans and have better reflexes. One stray punch from an Amali could easily injure a human.

Amali smell, hearing, and taste are intense compared to a human. With sight and feeling being roughly average. Also, their tails and ears are extremely sensitive to being touched. Even in their human forms, they maintain their pointed ears and long fluffy tails.

What is one cultural change a society of mostly humans would inevitably have to make to safely live alongside a class of Amali, even though the latter class is stronger, faster, and have keener senses than humans?

In other words, what is one major cultural or societal change that would allow the two sides to coexist peacefully?

I am looking for one clear solution that:

-Is as humane and painless for both sides as possible.

-Takes into account all three aspects of the Amali

-Naturally incorporates the two sides, human and Amali, into one cohesive and mutually beneficial society.

I am not looking for a solution that:

-Actively hurts either the Amali or the humans

-Endorses enmity or dehumanization of either the Amali or the humans.

-Does not consider the complications Amali powers might bring on a society of many humans.

Humans are already pretty scary. We have cops.

There have long been big dudes in society. Dudes much bigger than me. They may have big beards, these dudes and sometimes they look at people much smaller than them and you can't tell what they are thinking. Maybe violent thoughts.

I heard one of these very large dudes got violent and threw people around. They can be prone to rage I am told. Probably when they get into the liquor. I, a medium sized dude, am very polite and calm around these big dudes and so far I have not had any trouble from one.

But if there is trouble, fortunately society has other big dudes and some medium sized dudes and dudettes who have regular jobs keeping order. They are the police. If one of these scary big dudes starts stomping around and snorting, you can call the police. In some cities they shoot the scary dude. In other cities they might beat him into submission, or if police persons are equally big, tackle him. Sometimes the police will try to talk an enraged dude down and with a little luck that could work.

Scary big people is nothing that human society has not dealt with. The fact that they are also hairy and sensitive does not make them harder to cope with.

Without modification to how you've designed the Amali, I'd say the only way that they can live comfortably alongside humans - with them both as free equals - is by intense social codes. Maybe in the past there was awful misuse of the Amali's wolf form, and thus society has built up for the Amali in the wake of this prioritizing virtues like self control, and calmness.

Another route might be interbreeding between humans and the Amali - the effect of diluting the gene pool has lessened some of the harsher effects - perhaps after a great deal of time of intermingling, the larger part of the Amali are partially removed from their ancestors - they will turn into wolf creatures, and be more angered and strong in this state, but they are able to control themselves.

Perhaps the humans are extremely afraid of Amali. This leads them to walk on eggshells in every interaction with them.

There is the alternate route from all this that one race subjugates the other - but I think that there are many other routes aside from that, and ones that still provide a great deal of interesting stories to tell. Maybe of an Amali that is more genetically "pure" and hence is more vicious in their transformation - they are extremely self conscious and receive much prejudice for their status.

Now, as far as societal policies to better accommodate the Amali - I imagine the biggest one is having a specific subset of the police that is focused only on taking control of those who are transformed and enraged. Maybe they search out Amali that are well restrained and train them to control their transformations well in a safe environment.

Heavy fines might be imposed on those who cause destruction after transforming - this might keep the Amali in check out of fear from their own legal and government systems. Again, opportunities for stories, where an Amali mother could feel extreme burden at her inability to control herself, and thus endangering the welfare of her family.

On the technological side, perhaps there are certain herbs and medicines designed to pacify those prone to transforming. Even in a pre industrial world there would likely be many such things. Alcohol unfortunately, might be one of them.

As for things like you mentioned, chairs allowing for tails - do the Amali have features like wolf tails and ears when not transformed? If so, I don't see this being especially difficult. Many chairs in our world already have a gap at the back. Clothing would have to be tailored specifically for Amali to allow their tails and ears to poke through. Nothing really too difficult.

Lets compare it to a real life example. Elephants.

Will they hurt you randomly? If they want to.

Large animals with immense strength can happily be used around children. Muscular strength isn't something you're forced to use. An elephant can be gentle and friendly and loving as much as it can brutally crush their enemies.

As such, the only ones that will be allowed nearby are the ones that have a friendly personality. If they are trusted they'll be allowed to be close. If they murder someone it's likely intentional. Just as you can be gentle and friendly to an ant, enough to stroke it if you want, even a super strong wolfman can be gentle and friendly to humans if they want.

Ones who were unfriendly could easily be captured and killed with spears and sense bombs, either loud noises or powerful scents. You would likely have some specialists to do this in most villages, specialist werewolf death and disabling squads.

You can sit on normal chairs with tails, by sitting on them sideways or backwards. 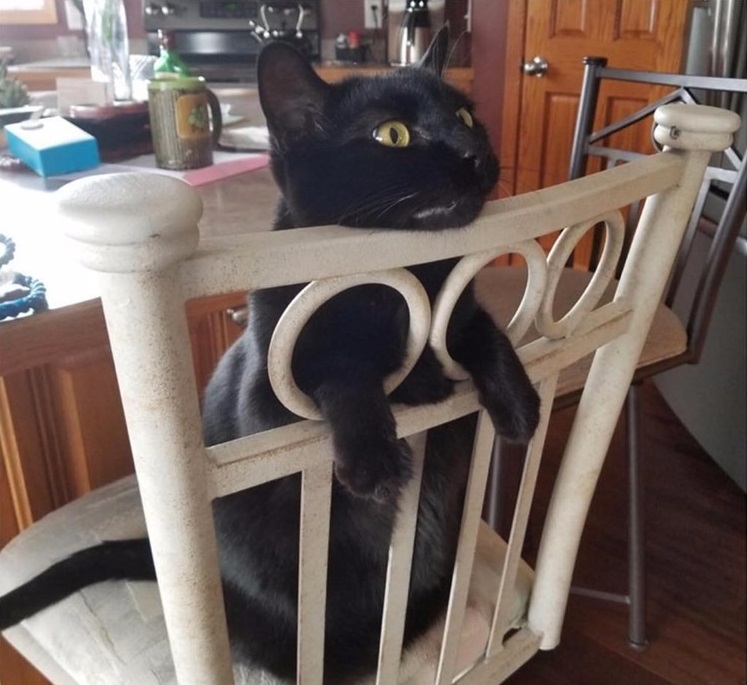 You can also curl your tail into your lap, or wrap it around the chair leg.

If the chair was made to accomodate them, it may have a hole in the back.

Some sensory adaptions would be needed.

There would probably be a big push by the Amali to keep the place clean. The latrines would be far away, they would work hard to make sure fresh water was nearby to allow cleaning.

There would be food made for Amali, with gentler tastes. Some brave Amali would no doubt try human food, and run away with burnt mouths.

The big accomodation you need is an equalizer between Amali and humans. Perhaps some sort of plant that's strong enough to make them vomit and collapse, or an easily made tool that can make a sound loud enough to paralyze them. This will equalize power relationships between them, allowing a human to face off against a rampaging Amali.

That will encourage the rest to work with humans, rather than against them. Their immense strength can be turned to the good of village life.

The two species can't be on a level playing field. Traditionally, it is the role of a weaker population to enslave one with greater capabilities - for example, women were subjugated due to their ability to bear children, and American slaves were imported all the way from Africa at great expense because they could survive overwork, brutal conditions, and malaria all at the same time where other captive populations quickly perished.

The werewolves could not have been bested in battle, but once lured into breeding, their offspring could be weaponized against them until they were defeated. In more recent times, to maintain the werewolves in a happy state, they are "pithed" early in development - their superior immune system and regenerative capability allowing them to survive a quite crude neurosurgery with a hot wire. With their limbic systems taken offline, and being selectively bred for a combination of the more convenient aspects of Williams syndrome and Angelman syndrome, they have proved to be cheerful and helpful servants. When necessary for war, they can still be reactivated by a crude adrenal extract of cattle, and workers in the field of animal electricity have been making fascinating progress duplicating this with implanted wires sparked by rubbing wool and amber.

Less Hostility towards People who are Different.

To keep the peace you can change your people to remove their innate hostility towards people who are different from them. I suggest making them susceptible to pheremones from the werewolves so they activate the "It's a dog" part of their brain and not the "It's a monster" part. We don't like monsters. Oh no, monsters are big and scary and want to eat us. But we like dogs. Dogs are nice.

Willk points out how the werewolves being ten times stronger and faster than the average person is not an immediate disqualifier. In the real world we already have people with guns who are ten times more dangerous than people without guns. Moreover some people carry concealed guns and so you cannot tell which are the dangerous people, compared to the werewolf where the fluffy ears and tails are a dead giveaway.

The fact that these werewolves are emotionally volatile must be managed somehow of course. But once you remove the innate hatred between the two groups, this should be easier to do on a societal level, rather than a biological level.

Not the answer you're looking for? Browse other questions tagged society werewolf .

41
What effects would a change in the nature of human sexuality have on society and infrastructure
4
Trials to save humanity
12
How would society function with only one male per generation?
19
Suggested steps for creating a new race?
5
What is a good title (name prefix) for a class of society that serves as both a civil servant and clergy all in one?
5
Which real culture would best match this hunter wolf-people society?
1
What would a society where humans coexist with a second species with the intelligence of an 8 year old look like?
12
What would it take to, in 1998, soundproof a room against someone with the hearing of a wolf?