Which real culture would best match this hunter wolf-people society?

I'm creating this race of wolf people (well, they're more like human-like beings with wolf traits like ears, fangs and tails). This is one of my main characters called Acacia, and she's from that race called albuminids (don't worry it's a quick draw haha). 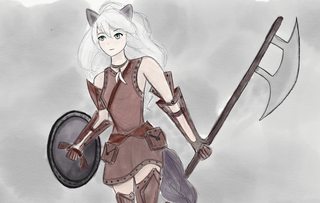 They live along a vast tundra where they settle in small settlements. They live mainly from hunting and fishing, although they have good skills in metallurgy and shamanism. They usually fight in small groups with stalking strategies, while some distract the enemy.

They usually sleep together to conserve body heat and, when they die, tend to give a fang of the deceased to each child for use in a necklace and to be able to remember them.

I would like to find a human civilization that existed to be able to inspire their dresses and some cultural traits. My story is set in a late middle age world.

The big question question is how advanced you want their metallurgy, the more advanced it is the more sessile they have to be, advanced furnaces and forges are too big to move. Iron basically precludes nomads but anyone can work copper. More importantly devoting the amount of time, labor and resources means you need a large food surplus. These two factors means your people need to have some form of agriculture either pastoralism or farming. You have to decide whether you want them to trade for their advanced metal, or take up agriculture.

If they will trade for their metal the Sami people(laplanders) may be a good choice, nomadic pastoralists famous for herding reindeer, also lots of hunting and fishing. They also have very distinctive dress.

If they make their metal and thus also farm consider the Norse, who have strong fishing and hunting tradition and the long winters lent themselves to smithing. They are fairly well known however and they were not shamanistic although their religion did have a strong focus on magic.

The Inuit may also be a choice with a strong hunting and fishing tradition but lack metallurgy (aside from one region built entirely around a single large meteorite) .

Developing metallurgy usually comes with settled people- not nomads as per Guns, Germs, and Steel. This is true in humans, anyways. So getting advanced metallurgy and a nomadic lifestyle is not really going to happen with humans.

Specifically, look at these people when adopting European technology and animals. They retained a lot of their nomadic ways, but gained horses and muskets.

Your Hunter Wolf-folk could be like the Sioux, but someone taught them how to find and develop ore. There is a key difference here: they do not get overrun by their metallurgical teachers. They can gain their metallurgy, but retain their nomadic ways.

How were they not overrun? Maybe the wolf-folk fled to an island (or new continent) like the Japanese (or like Leif Erikson). Maybe something killed off their teachers, like bad harvests (which your wolf people don't care about, because they're carnivores?). Either way, that's the end of this answer.

The closest I can think of is Chukchi, although they have no nekomimi and do not tend to wear open dresses (could be because such an extreme fashion choice limits your survival to what, about 30 minutes at -50C?). Although some tribes were shepherds, others were living from hunting. Didn't have any metallurgy themselves, but had access to metal things from Russians, with whom they were constantly trading and/or fighting.

I would go with something like the steppes people like the Scythians because they had complex culture and awesome art including tattooing and metal work (beautiful goldwork) and their outfits were cool.

Metallurgy part is easy, they're nomadic moving from place to place feeding their herds, but in Winter they have to camp and don't have much to do except practice their arts and perhaps hunt a bit. So have their winter camp near ore deposits and the knowledge of how to smelt and forge etc,. and you're away laughing.

Since you are asking for hunters living in a tundra, you can look back at Ötzi (not middle age, though)

Ötzi's clothes were sophisticated. He wore a cloak made of woven grass and a coat, a belt, a pair of leggings, a loincloth and shoes, all made of leather of different skins. He also wore a bearskin cap with a leather chin strap. The shoes were waterproof and wide, seemingly designed for walking across the snow; they were constructed using bearskin for the soles, deer hide for the top panels, and a netting made of tree bark. Soft grass went around the foot and in the shoe and functioned like modern socks. The coat, belt, leggings and loincloth were constructed of vertical strips of leather sewn together with sinew. His belt had a pouch sewn to it that contained a cache of useful items: a scraper, drill, flint flake, bone awl and a dried fungus.

The leather loincloth and hide coat were made from sheepskin. Genetic analysis showed that the sheep species was nearer to modern domestic European sheep than to wild sheep; the items were made from the skins of at least four animals. Part of the coat was made from domesticated goat belonging to a mitochondrial haplogroup (a common female ancestor) that inhabits central Europe today.

The coat was made from several animals from two different species and was stitched together with hides available at the time.

Shoelaces were made from the European genetic population of cattle. The quiver was made from wild roe deer, the fur hat was made from a genetic lineage of brown bear which lives in the region today. Writing in the journal Scientific Reports, researchers from Ireland and Italy reported their analysis of mitochondrial DNA, that was extracted from nine fragments from six of his garments, including his loin cloth and fur cap 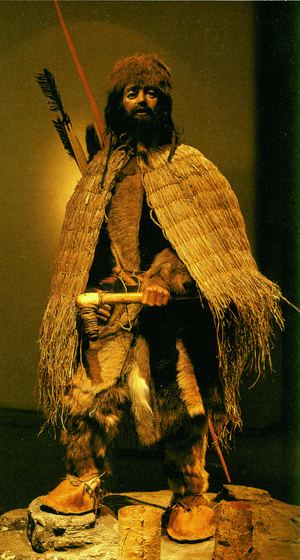 His body was also found to have tattooes in places where he had physical problems, so they had some kind of magic belief.

Since his population lived in the Alps there are some similarities with the tundra.

Not the answer you're looking for? Browse other questions tagged society magic culture fantasy-races or ask your own question.

9
What would the culture and traditions of "invisible" people look like?
27
How would people behave if society could vote to send people to a rubbish planet?
1
Which Cuisines Would Adapt Best To Space?
2
How can society advance as a civilization if it kills off its best people?
6
What political system, in real world spectrum, would this be?
6
In a society of bird people, what would the gender roles be, based off of bird society IRL?
9
How to sustain this sedentary hunter-gatherer society?
6
How Can Vampires Obtain Donors?