Most effective gill design for a humanoid?

In the distant past, Water was a world much like Earth--but all of its continents have been eroded away, such that its surface is entirely covered in, well... water.

While many of Water's ancient inhabitants went off and colonized the stars, two technologically-regressed groups still live there: the People of the Water, who live on top of the water and breathe air, and the People of the Land, who live on the land; that is to say, under the water. Millions of years ago, the progenitors of the People of the Land genetically engineered themselves to be able to survive in their changing world as dry land became more and more scarce. They are regionally endothermic, keeping their central nervous systems and core muscle groups warm but not wasting energy regulating the rest of the body; they have bioluminescent patches to produce their own light to see by in the deep regions; and they can survive on fermentative metabolism, ultimately producing CO2 and methane waste, for a long time.

(The People of the Water are partially designed as well, just in different ways from their land-dwelling cousins.)

But, oxygen is still really nice to have, and anoxia, while survivable, is not pleasant! They live full time on wet land, rather than in the water column, so regularly surfacing to breathe air like the People of the Water do is not an option. So, given that they have a basically-humanoid head and upper torso (so not a lot of room for gill slits in the neck), with tool-using arms and hands, and that, while evolution has had time to change them, they were initially engineered, what would be the most effective way for them to get oxygen underwater? 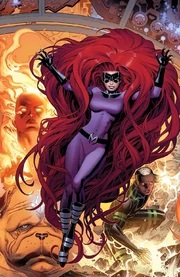 The external gills have the entire length of the body to hang down, and minimally encumber the humanoid. Augmenting blood flow to the head is no huge ask - the head has 4 big arteries supplying it already and gravity can help with the venous return of oxygenated blood.

Plus all that red gillage is a rocking look. But be careful with the comb now. That red is blood, and it is close to the surface.

Body hair can be used as exchange surface for breathing.

This would reduce the risk of suffocation, since it's more difficult to have the whole body not exposed to fresh water or accidentally hair trimmed.

I see no reason why we need to change the full body plan. We can make due with what us there and adapt it.

If we try to just submerge us and use gills in the lungs, we'll suffocate. Water hold much less oxigen than air, so we would need to take in more water for the same oxigen. That alone is already enough to kill us, but it isn't all. As water is much more difficult to 'breathe', you'll also exert much more energy for each breath. It would be like doing a full marathon of effort, just to breathe normally.

To improve this, we can start with making the lungs more fish like. Fish gulp a mouthful of water and force it along the gills. I didn't find exactly why they force it, but I suspect good gas exchange between the blood and water only happens well if water flows past fast, as it'll be saturated quickly. If we gulp down water, we can force it out at gills at the lower end of our ribcage. This both increases the throughput of water, as the exit is close to the surface, and decreases the amount of energy wasted by forcing it through a long tube twice. If we follow this further we can decide to have gill 'inputs' closer to the lungs on the ribcage. This does pose difficulties for how the ribcage is constructed. In addition, biology normally reduces the amounts of orifices, as each orifice is an extra area susceptible to infection and such. We can still see that where needed more holes are available, like gills with fish.

If we're already upgrading the ribcage, you could look at a way to breathe separately with each lung. That way you always have a flow of water, letting your beings be oxygenated more equally at all times.

Compared to lets say gill hair you have many advantages. The active process makes sure you don't suffocate. Gill hair on the head or body is passive, making it possible that the person will draw the oxigen out of the oxigen in touch with hair and then it isn't replenished, making them suffocate. This can happen during sleep or when doing stationary (heavy) tasks. Even some movement isn't going to help. If this was the case, fish would do it.

The energy needed isn't too high, as you have many gill slits close to the lungs make sure the flow is as easy as possible. This resembles fish breathing more closely as well, which have had many millenia of evolution to come up with good breathing methods under water.

The ribcage needs an overhaul. The gill slits will make the workings of a ribcage or similar more difficult. Possibly they can be installed front and back just under the ribcage. This requires a much smaller amount if work, doesn't interfere with the muscles used for breathing and only marginally increases the length of the tubes to the lungs as well as decrease the total draw in size of the holes.

The lungs can possibly be more flat, allowing for better musculature. This is as volume is less important than flow over the gills.

The fish people do require no clothing at the gill holes, but as they are regionally endothermic this isn't too much of an issue. In addition, the temperature at a certain ocean layer is also very stable, so they are likely evolved to withstand such temperatures.

Regular humans need around 0.84kg of oxygen every day. Water can have at most 20 mg/L on Earth, and gills can extract up to 75% of the oxygen in the water. This means that, based on what real data we have, your humans will need to extract oxygen from 56000L of water each day, or about half a litre per second. While this seems like a lot, they don't have to do it themselves

This figure we have extracted seems rather reasonable when spread across several sea-creatures. A fish, with a properly designed swim-bladder system, could extract enough oxygen to create a rather good oxygen mix, which they could then put out into some sort of collector in which the humans could go to breathe

The humans would still need adaptations for holding their breath like whales and manatees, if this system is to work. They would also benefit from some sort of gill. Such a gill would best be fish-like, on the 5 pharyngeal arch in the neck, and would have the form of a gill pouch in the neck that opens somewhere in the pharynx and empties out of the sides of the throat.

Not the answer you're looking for? Browse other questions tagged creature-design merfolk metabolism .

11
How could water breathing animals have a warm-blooded level of metabolism?
13
Possibility of bipedal mostly-aquatic species?
1
How does a herbivorous mermaid species without gills and swim bladder stay underwater its entire life?
53
What would an out-of-water submarine (for water-breathing mer-people) look like?
17
Why might it be desirable to engineer aquatic humans?
1
Can you breathe underwater with fluid-filled lungs?
10
What would be the most comfortable position for mermaids and humans to engage in sexual relationships?
3
What is the most plausible way to do electronic respiration in humans?
4
Would merfolk kept in captivity suffer from lack of oxygen?