How could a society of giants remain hidden?

How could a society of about 10 giants remain hidden from the world in this day and age? These giants are ~50 feet high, uneducated, and eat humans. They run very fast and are very strong. How could they remain hidden to humans?

P.S. I got this idea from the BFG

Only the Natives Know

With those three things in place, you could have limited human interaction on the "native stone age tribe" level. Because humans are EVERYWHERE. But, lucky giants, nobody believes the "ignorant natives" when they tell stories of giant men who live in the deep woods. Sure a villager goes missing every now and then. And, sure, that one idiot with and his cameraman went in 15 years ago and the cameraman came out (without his camera conveniently) screaming about the Ingonyama (or whatever the natives call them). But the natives obviously don't know anything about the real world! Nevermind the fact that the wider world didn't believe in mountain gorillas for literal centuries.

If your natives get the South American Treatment and remain uncontacted until close to modern times, their traditional land will be protected. Those that want to can live how they always have. Those that don't will move into "civilization" and be laughed at about giant humans until they don't talk about them anymore. Sure the odd crackpot might come looking, but the odds of them finding anything concrete enough to be believed in the wider scientific world is unlikely.

The reason I say there should be some primitive human knowledge of them is that anywhere on earth where a person CAN go they WILL go. Probably went centuries ago. So you need a native population to act as a "buffer" between your giants and the rest of humanity. Otherwise the "realistic" answer is somebody either found them centuries ago OR they were spotted by loggers/whoever else came along later to destroy/exploit/harvest their natural habitat. But with a native population involved you can realistically keep them a "myth" almost nobody knows about, especially in the "modern world." For a look at something similar, check out mokele mbembe, the supposed species of long-necked sauropod living in the Congo River basin.

Your second play could be an island, but islands tend to shrink down big things (and humans are big for mammals on average) not make them get bigger. Which is why Homo Floriensis was tiny. That'd realistically be the only way to keep a species of giant wholly out of human knowledge (though again unlikely, sailors tend to have maps of everything and what they didn'nt find, satellite photography did). The downside is the second someone found the island they'd go have a look, and then your giants are out of the proverbial bag. 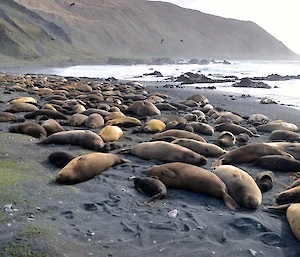 As regards eating humans, sure. These giants eat whatever they can catch. That is mostly seals but they will eat penguins, whales, humans - anything that moves or used to move.

As regards something which regularly eats humans also being unknown by humans that one is too tricky for me.

Protection by a state actor or large drug cartel

Now assume that they have a really efficient metabolism and only need to eat 0.5% of their body weight per day, this puts their daily intake at 189 kg of food per day. Multiply by 10 for the number of giants and the tribe needs 1890 kg of food per day. Humans are a major part of their diet - guessing at a number, let's say one third of the total diet - so 630 kg of human per day.

Even with the most optimistic estimate of the giants being able to feed on 90 kg humans - that's a pretty big and well fed person - the giants are eating seven people per day, or around 2500 people per year (more if the average mass is <90 kg). This is an unsustainable rate of predation for anything smaller than a large city. However, giants routinely killing and eating thousands of people in the vicinity of a large city in modern times would be seen and subsequently appear on YouTube within days, which breaks the conditions of the question.

There are only two options that I can see. One is that the giants are kept in a location that provides security for an area of vital importance to a successful Central / South American drug cartel, and the majority of the giants' human food is provided by dumped murder victims, supplemented by trespassers. (Note that Mexico's murder rate for 2020 was over 32,000 people, the majority of which were killed in drug-related violence.)

The second option is that a state actor is using the giants to secure or possibly deliberately depopulate an area. This would require a state actor that has sufficient control over the internet and other media / communications to prevent any word of this activity getting out, in addition to both motivation and willingness to kill a large number of its own people. I'll leave it as an exercise for the reader to determine which government/s meet these requirements.

However, the big weakness with all of these scenarios is the requirement for absolute secrecy. A 15 metre tall, 38 ton humanoid would be very easily detected by satellites both on visual and thermal sensors, especially if they are operating in areas that are of interest to countries such as the USA (which would take an interest in the target areas due to both the War on Drugs and ... friction with certain insular state actors engaging in genocide). There is also the question of how secrecy was maintained up until the present day - assuming that the giants have existed continuously for hundreds or thousands of years consuming thousands of people per year, how has no one ever survived with evidence.

As several people have pointed out, the metabolic requirements of a tribe of giants the size you want are hard to justify if you want them to rely on humans as a food source. It's not as bad as some would have it though, and it might be fixable if you bend biology a bit!

The giants are about 8 times taller than human males (source: observing my Scandinavian friends), and with the same proportions should weigh about 500 times as much. Let's say 40 tonnes.

According to Kleiber's law, food requirements scale roughly as an animal's metabolic rate scales approximately as mass to the power 3/4, and the giants thus each need to eat just about 100 times as much as a human.

How much human does a human need to eat to survive? According to What If:

"If the average human weighs 50 kilograms and eats a couple thousand calories per day, then—according to Ryan North—then one person contains enough meat to feed another person for about a month."

(My reference humans are heavier than 50 kilos, but not by THAT much, and if you would instead take the exponent in Kleiber's law to be 2/3 as some have argued this doesn't affect my calculations much.)

Using the scaling calculated above, we find that each giant would need about 3 people per day. If they could supplement their diet with animals or even some vegetables or grains, you could probably get down to one human a day and still have this qualify as a "major part of their diet".

10 giants would thus need about 3600 humans a year. This is still a lot, and places serious limitations on how an "uneducated" tribe of giants could look, if the word is meant to imply that they are like the dimwitted trope trolls we see in popular fiction.

As this question is marked with reality-check, I will answer "Yes, it's possible", but it's hard. I like the answer by Dario Quint, and if you only require the giants to snack on humans occasionally Willk's answer is really great!

If you are not strictly limited by our current understanding of biology, however, the answer changes to "Yes!". You just need a bit of currently un-understood biology, or "magic" if you will.

The first that came to my mind was to have the giants periodically turn to stone, like some trolls are known to do, but in a reversible way. People and animals made of stone are spread about many cities, and they are known to consume very little energy. If they depetrify during nights with a full moon, that's 60 percent of the time which translates to 6 humans a year per giant. They manage to catch on average one every other time they are awake, and otherwise they eat other animals. Of course you could have the depetrify even more rarely or more often, but keep in mind that the depetrification process itself likely requires some energy. If the cycle is repeated too often the gain will likely vanish.

If we assume the bowel content of the giants doesn't petrify, this opens up huge possibilities for them to use the long hibernation to digest stuff that is really hard for other creatures to use. Wood comes to mind, but grass or other plant matter works as well. You could thus have giants living i remote places, being able to sustain themselves largely on chewing up trees (or even houses, as I'm sure I've read about giant's doing!) and stealing cattle, while sometimes catching humans as an important supplement to their diet!

Long ago, giants were more numerous than today and constituted a small but reproductively stable population. Early in human history, one of the early projects of the emerging civilisations was to seek out and destroy giants, mostly while they were petrified. This is why you find legends about giants everywhere.

Since their lifespans are so stretched out, even a declining and not reproductively stable population can linger for a very long time. Over the last few thousand years, giants have learned to be extremely cautious around humans and to avoid detection at all costs. One main reason for them to prefer eating humans to other animals is simple revenge. Most of them hate humans above anything else!

The petrification process is precisely controlled by the giant biology, to make sure the stone is both resilient and reversible. Dead giants petrify in a chaotic manner that leaves the stone brittle, and are not readily distinguishable as humanoid after only a few years or even months. This is why we don't find any giant remains that would expose them to the world. Any proof of their existence are lost to history.

Not the answer you're looking for? Browse other questions tagged reality-check mythical-creatures population or ask your own question.

12
Neural network used as "doping"
40
Jobs for Giants in modern society
14
What is the Fighting Population of a Goblin Community?
5
How plausible is a "Lightning Amentum"
5
How large could a population of supernatural beings be and still be plausibly hidden?
2
How can giants be incorporated as foot soldiers into a traditional army?
4
Could my Kangaroo-Monkeys exist?