Given inspiration from this post here, I have been working on a society of aliens in which each tribe lives on a single member of species of enormous megafauna. Let's call the megafauna the "whale" and the aliens on it the "barnacles." Both these creatures evolved on a moon (around Venus to Earth size) that orbits Barnard's Star B using methane/ethane as a solvent rather and divergent biochemistry from creatures on earth. The relationship between these two would be that the whale travels through large deserts to get to the various oases around the liquid methane/ethane lakes that dot the moon. So the large body began to evolve as a method to avoid wasting away as it migrates through the desert. To get even bigger the whale developed a symbiotic relationship with the barnacles (the largest height is around six feet or 2 meters) where they, as detrivores subsist and specialize to eat its waste and provide protection from other large fauna and parasites by taking care of the whale. They build structures on their back and live on it as a nomadic pastoralist tribe. This allows the whales to develop a much bigger size with them being protected from being an easy, giant target and allows the barnacles to specialize in feeding on the waste of the whale and to develop intelligence and sentience to protect the whale, as a result of the vast supply of food they have access to from the whale. The whales live over two millenniums and reproduces barely above replacement rates, and the barnacles reproduce slowly and sparsely as well, living from 400 to 600 years.

So, given the anatomy of the creature in the answer to the linked question by TheBlackCat, and the description and features above, could the whale grow to have the total square feet of the top of its body be at a minimum of three acres (12140.6 meters) to hold a small nomadic tribe to live atop it, and, if not, how large could it get and would that still be enough to have a tribe larger than your average band society?

Here is an image if you need a visual of the creature I am describing: 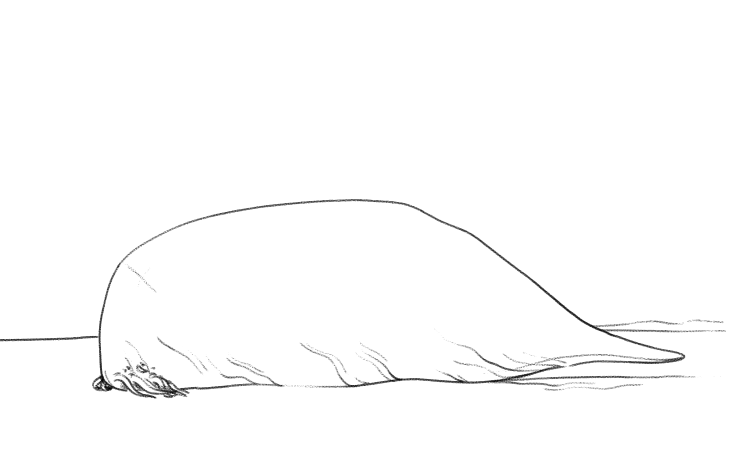 You Will Need to Make it Flat

An animal is limited in how tall it can be. The taller you make it, the more weight you put on any given cross-section of it. So, if for example your whale were about 65 m wide, 65 m tall, and 185 m long (about how big it would be based on your illustration and minimum size), it's belly would be under the crushing force of ~6.5 kg/cm^2 rendering it completely immobile in anywhere near 1G of gravity. This would also cause so much compression that any blood vessels in the lower parts of its body would collapse causing it to die pretty rapidly.

For comparison, the tallest terrestrial animal ever was only about 17m tall, and that was only doable because it was not a solid mass of flesh like your whale would be. However, this limitation is not nearly so much of a problem in terms of width and length; So, if you instead had an animal that were 65m wide, 185m long, and only 1-3m tall, then any given vertical cross-section of itself could hold up its own weight with weight to spare. Infact, as long as it is not too tall you can make it pretty much as long and wide as you want as long as it has some way of providing nutrients to feed its entire body.

So instead of a giant whale, you should consider a giant flatworm, or maybe even a sort of giant millipede with many parallel lines of legs instead of just two

But what about its central organ systems?

Another, though be it less limiting size factor is the scale of digestive/respiratory/circulatory systems on megafauna. The longer you make these system have to travel, the harder it is to get needed nutrients to all of the extremities of the body. Take blood for example, as you pump it out from your heart, all of the tissue between your heart and toes are taking up some of the oxygen. If you had to pump blood to a body part > 100m from your heart, it would not have any oxygen left to deliver to your extremities.... not to mention the extreme pressure it would create nearest to the heart for it to still have movement once it gets all the way dissipated.

You can solve for this with segmentation. A tapeworm for example is made up of many chained together body segments that can each function on its own. So your giant flatworm may in fact be made up of thousands organ sacs that are each responsible for its own respiration, circulation, and digestion. One way to do this is to treat your whale kind of like a lichen. On Earth, lichen is a symbiotic relationship between a producer (algae) and a consumer (fungus). In your world, many plants may be unable to survive indefinitely in one place due to water (or in your case, methane/ethane) deficits; so, your whale travels between sources consuming entire reservoirs at a time, and on its back grows plants that it gives some of that liquid reserve too, while also feeding off of the plants. Since it can simultaneously feed off of all of the plants from each of its body segments, it does not need centralised digestion or circulation; so, you can make it as wide or long as you desire.

Instead of living off of the whale's waste directly, they could live off of the vegetation on the whale's back. They could eat the plants for food, tap their sap for hydration, and even use their wood for building homes, all without harming the whale ... and this is where the barnacle symbiosis comes in. On a whale with no barnacles, the layer of vegetation on a the back would be harder to maintain. Sometimes it would flourish, and sometimes a swarm of parasites will come along and eat all of the vegetation, and sometimes noxious weeds will take over poisoning the whale, and sometimes a larger predator will come along and try to make a meal out of the whale itself. But the barnacles are essentially an agrarian society. They deliberately cultivate the whale's back for crops of good vegetation that is safe for both the barnacle and whale while making sure to weed out any noxious plants and fend off parasites and predators.

It seems like there would be a finite limit to its growth, due to make a comparison of the limited size of land animals on earth. While biology could certainly allow for the whale to grow larger than most animals on earth,it seems as if it's size would then end up being limited to the strength and forces that the biological compounds and structures that make it up, that and internal bouyant sacks. Presuming they're carbon-based, some of the strongest materials biological materials they could potentially be made out of would-be diamond and carbon fiber, which have compressive strengths of 889 MPa and 470.4 GPa accordingly. I don't however, how to calculate the maximum load or size accordingly. According to this information, it does seem to be perfectly plausible. As for the potential size I can't tell you that.

You ever hear of Rule of Cool? It's a trope where something just happens because the writers think it's cool, and the audience willingly suspends disbelief to enjoy the awesomeness of that thing. This is the "science" behind giant spiders, dragons, and countless other staples of fantasy and sci-fi.

In other words, you may not have to explain it at all! If you do, though, here are some ideas:

Due to some mind-boggling distortion of reality caused by the whale itself (or some ingested alien artifacts, like in that one Russian story I can't recall the name of, it starts with S and it's an acronym), the whale can handle the forces of gravity far better than the square-cube law allows. In other words, it can be gigantic and function normally because handwavium.

No one ever said aliens had to be like Earth animals, and you clearly understand this, but you haven't followed that to its logical conclusion, which is: anything can exist in this big, beautiful, and very much surprising universe. Perhaps the alien's biology is designed in such a way it can handle the strains of gigantism to function normally, or perhaps it's just made of materials far superior to the carbon compounds that form life here, things like tempered steel, titanium, or graphene (yes it's a carbon compound but it's not organic now is it?)

Seriously, it's an alien lifeform, you have room to work with. Intelligent design also works wonders if you want to go that route. Anyway, I hope this helps!

Not the answer you're looking for? Browse other questions tagged biology creature-design xenobiology anatomy bio-mechanics .

8
What is the best body plan to allow for giant size in a terrestrial animal?

39
An underwater creature that could take down a boat
11
Could a deep ocean creature use some kind of bacteria in its body as a way to generate oxygen?
14
What would be the psychological differences between a human and an intelligent detrivore?
15
Plausibility Check: Armored Birds
13
Plausibility of squid whales
11
How Efficient Could Anaerobic Megafauna Be?
5
Plausibility of Hexapodal Aerial Megafauna
7
Is my fire resistant megafauna plausible?
0
Plausibility of this hand-foot combination
1
Plausibility of plastic bones