Would a carnivorous diet be able to support a giant worm?

In my fantasy world there is a large valley. At the northern end lies the 'endless desert' called the "Sea of Glass" due to its shimmering sands. Within these deserts live great wyrms that swim through the sand as if it was an ocean.

The wyrms/worms would roughly have these dimensions: 4 meters high and wide and stretching to lengths between 10 to 30 meters. The 'mouth' of the beast is cylindrical however their mouth is protected by a beak that is enclosed during burrowing (making a cone shape).

The worms most likely breath oxygen and would need to resurface (think about the same time as a humpback whale). Their main hunting strategy is to stalk their prey using echolocation to hear footsteps above the sand then the worm would launch its self forward and open their beak aiming to suddenly swallow and enclose their prey.

These worms are pretty big critters. I'm wondering if a purely carnivorous diet would be able to sustain a worm of this size as well as possible eating habits as a bonus (ex: would it be better to eat one large meal and then sleep or would they be more like sharks and constantly on the move)

One animal species that does exist in this world, but not the Sahara, is a creature similar to a Bantha from Star Wars. They'd be furry animals comparable to yaks in size, but relating more to elephants in nature.

Your worms are ambush predators. They very rarely move. 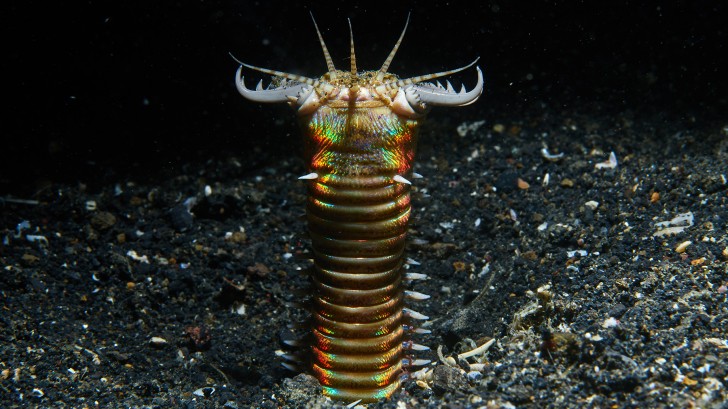 are real. They lurk, waiting for something to pass by in reach and then they pounce. They get big; at least 3 meters. For big predators they move so little they can go unrecognized in plain sight for many years.

In 2013 a metre-long worm was found by staff at Maidenhead Aquatics in Woking, Surrey, which they estimate had been living in the tank for 10 years undetected. An even larger worm was found in 2009 at the Blue Reef Aquarium in Newquay, which had been devouring fish and even snapping bits of coral off the tank’s reef installation; the staff nicknamed it “Barry”. Further afield, a 3m long worm was discovered in a mooring raft in Japan's Seto Fishing Harbour in 2009 – one of the largest specimens ever discovered.

This is how your sandwyrms work. They do not cruise around looking for prey like the worms in Dune. That would expend a colossal amount of energy. They hold very, very still, and the main movement is a quick attack and then swallowing the prey.

The larger they are the less they move from place to place, and the truly big ones only move under extreme duress. They live in a desert, but this desert hosts a seasonal migration of large ungulates between their winter and summer homes. That migration is when the worms reliably feed. Feed they do - their bodies can expand to contain pretty much as many animals as they can catch, and they can catch one after another during the peak of migration. With those reserves the worms can go many years between feedings, and big ones can even metabolize their body segments and shrink in size during prolonged lean times.

The ones you find cruising around out and about are the juveniles looking for a new home. Those little ones relocate often and have been known to chase down prey. One might encounter several juveniles at once which can be a bad situation. Those can definitely be trouble but are unlikely to kill you outright. Some people might dig them out and reinstall them like biologic land mines.

4 meters high and wide and stretching to lengths between 10 to 30 meters is a huge beast.

Having to burrow in the sand to move takes quite some energy, as it requires displacing a dense medium. Plus ambushing the prey is another additional effort.

A carnivorous diet seems adapt to supply that much energy, however here is the issue: you state they live in a desert.

Large animals in the desert are rare or even absent, and smaller animals, though present, are scattered around.

For this it would be better a hunting strategy similar to whales: ingest and filter large amounts of medium (water for the whales, sand for the worms), capturing all the edible content.

Additional issue: in a desert with such a massive body heat dissipation might be an issue. Therefore a more lean body might be helpful.

A carnivorous worm is not unlike a snake and we have data about what snakes eat (they're all carnivores).

Giant snakes may only eat 4 to 6 times yearly. (ref) And snakes can lower their metabolic rates, become more protein efficient, and survive months without any food at all. Though most snakes eat every 5-14 days.

The largest snake in the world is the giant anaconda (Eunectes murinus). They weigh about 550 pounds (250 kilos), average 17 feet (just over 5 meters) in length, and can have a circumference of 3 feet (just under a meter, which is about 1/3 of a meter in diameter).

So something in the vicinity of one of the following (or a combination):

This is pretty doable for worms in an environment with lots of prey and not a lot of competition for it. But in the desert? That is rough. What other animals are there they could eat? That is what you need to answer. If you assume herds of roving flocks, and very few worms, you're good.

As for time between meals, they could rest for a long time after large meals but, given how much they have to eat (because there aren't other animals big enough to sustain them for a meal), they wouldn't rest too much. Weeks vs months.

Note that sometimes giant snakes eat each other. This isn't sustainable of course but it could reduce competition and keep a worm alive another several months.

There are already some good answers here, but I want to explore an issue which hasn't been covered yet. The biggest problem you have with your worms is not their size per se; it's the fact that they are cold blooded creatures in a desert.

Cold blooded animals have a metabolism that is in sync with the ambient temperature; that is to say, colder animals are more sluggish and eat less. Warmer ones are much more active and their appetites increase to match.

Crocodiles for example can get away with eating as little as a couple of Kgs of meat a day, but then they spend a lot of their time in water. Sharks too would eat a lot more if they weren't in a cold environment. It's believed that a T-Rex would have eaten around half a metric tonne of meat every day.

But, your worm has three issues that a T-Rex didn't have to deal with. It's literally burrowing through the sand to get anywhere (takes a lot more energy than walking), it's in a desert meaning that during the day it's very hot and it's even bigger again than the T-Rex, meaning that it doesn't make a good ambush predator; it can't leap out of the sand for instance because it would be fighting the square cube law (it jumps / carries / runs a smaller percentage of its body size as it scales up).

But, is it possible?

Well, your worm is going to need a lot of those Banthas you describe. That means they're likely solitary animals with massive territories to protect. That's because the desert is going to struggle to keep the water and food supplies available for large herds of Banthas or any other creature. But, that soon becomes a losing proposition as it's likely that your worm is going to spend more energy getting between creatures in the heat than it gets from the next Bantha. So, I don't think that a carnivorous worm in a desert would survive on that diet alone, no. If it did, then it would eat that huge meal all at once like a snake.

In point of fact if you're going to do it, you have to end up with something that works a lot like a snake on all fronts. That's far more likely than a worm. For a start, the scales of a snake are far more likely to protect the creature from the sand leaching out the moisture through the skin and if it's truly carnivorous, you'll need a brain and eyes and the like, none of which a worm has. Especially if you're looking for something that can catch meat rather than surviving as a carrion eater.

Not the answer you're looking for? Browse other questions tagged creature-design food .

6
how would the carnivorous grassland work?
6
Biological and ecological considerations for a giant worm
3
How feasible would a civilization of carnivorous organisms that subsist off fish farming be?
0
What changes to civilization would exist if a humanoid species evolved with a diet of feces?
2
Is it feasible for a Dune-style sand worm to have silica scales?
2
Would a diet of fish and potatoes be able to support a person in this situation?
5
Feasibility of Carnivorous Flower-worm
3
Carnivorous Flower-worm: Implantation Possible?
0
What would this giant naturally eat?