Clothes in a vegetarian society?

Two of the societies in my world are supposed to be vegetarian/vegan.

Society 1 lives in a temperate climate, similar to central/eastern Europe. I've thought of cotton-like plants for clothing and high protein/high-calorie plants and mushrooms they live off of.

However I'm still stuck with materials for shoes, as well as jewelry/celebratory clothes. Other cultures make theirs from animal bones/teeth and furs, but I'm not sure what theirs would be made out of. They're vegetarian since they still use animals for riding and agricultural use (preparing the ground, in compost, etc).

Society 2 lives up in the mountains and is completely vegan. I have the same problem with the shoes, though their celebratory clothing will include gems and metals, but other ideas are welcome as well!

Espadrilles are made with only vegetable fibers

Espadrilles (Spanish: alpargatas; Catalan: espardenya; Basque: espartinak), are casual, flat, but sometimes high-heeled shoes. They usually have a canvas or cotton fabric upper and a flexible sole made of esparto rope. The esparto rope sole is the defining characteristic of an espadrille; the uppers vary widely in style.

Esparto, halfah grass, or esparto grass is a fiber produced from two species of perennial grasses of north Africa and southern Europe. It is used for crafts, such as cords, basketry, and espadrilles. Stipa tenacissima and Lygeum spartum are the species used to produce esparto. 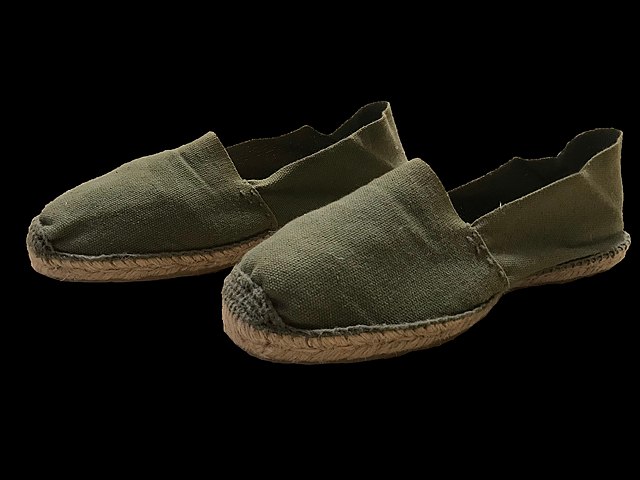 Though in the past they were peasants shoes, your people can use a similar approach to manufacture their shoes.

Another approach is what Japanese do with their geta: wood and rope.

Geta (下駄) are a form of traditional Japanese footwear that resemble clogs and flip-flops. They are a kind of sandal with an elevated wooden base held onto the foot with a fabric thong to keep the foot well above the ground. 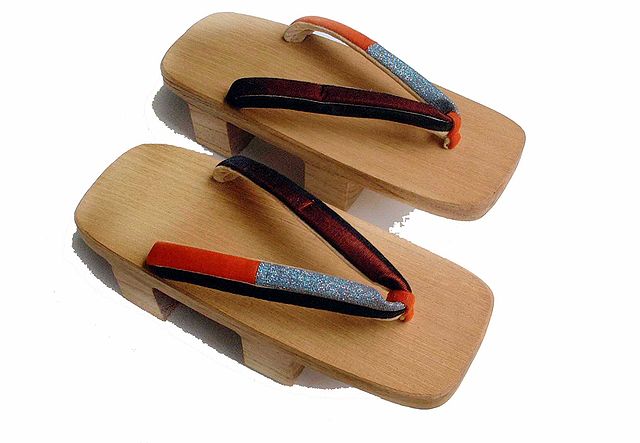 Depending upon the exact ethos of your vegans, they can still use leather and bone from natural kills. They become scavengers instead of hunters. They may learn where the local predators hunt, wait for them to make a kill and eat their full, then move in to strip the carcass of remains. Such a culture would have a problem with outsiders offering them animal products and swearing that they were natural kills; so I think there would be an emphasis on such items having to be acquired by the owner themselves so the provenance is known.

Notably, they might harvest from their own kinsmen when they die — vegans largely object to taking from animals because consent cannot be obtained. But humans could leave their corpse to the next generation to use. There are several examples of this sort of practice in human history (although, all of them were religiously inspired, vegan inspired, so far as I know).

A shoe really needs two things: a solid sole and a material to wrap around the foot. You could definitely use metal for the sole, but it would be easier to use wood. Even the mountain people should have access to enough wood to cobble shoes. Your society probably already has skilled woodworkers who could fell, cure, and carve trees.

You could use wood for the base and a plant fiber for the upper, like an English clog. 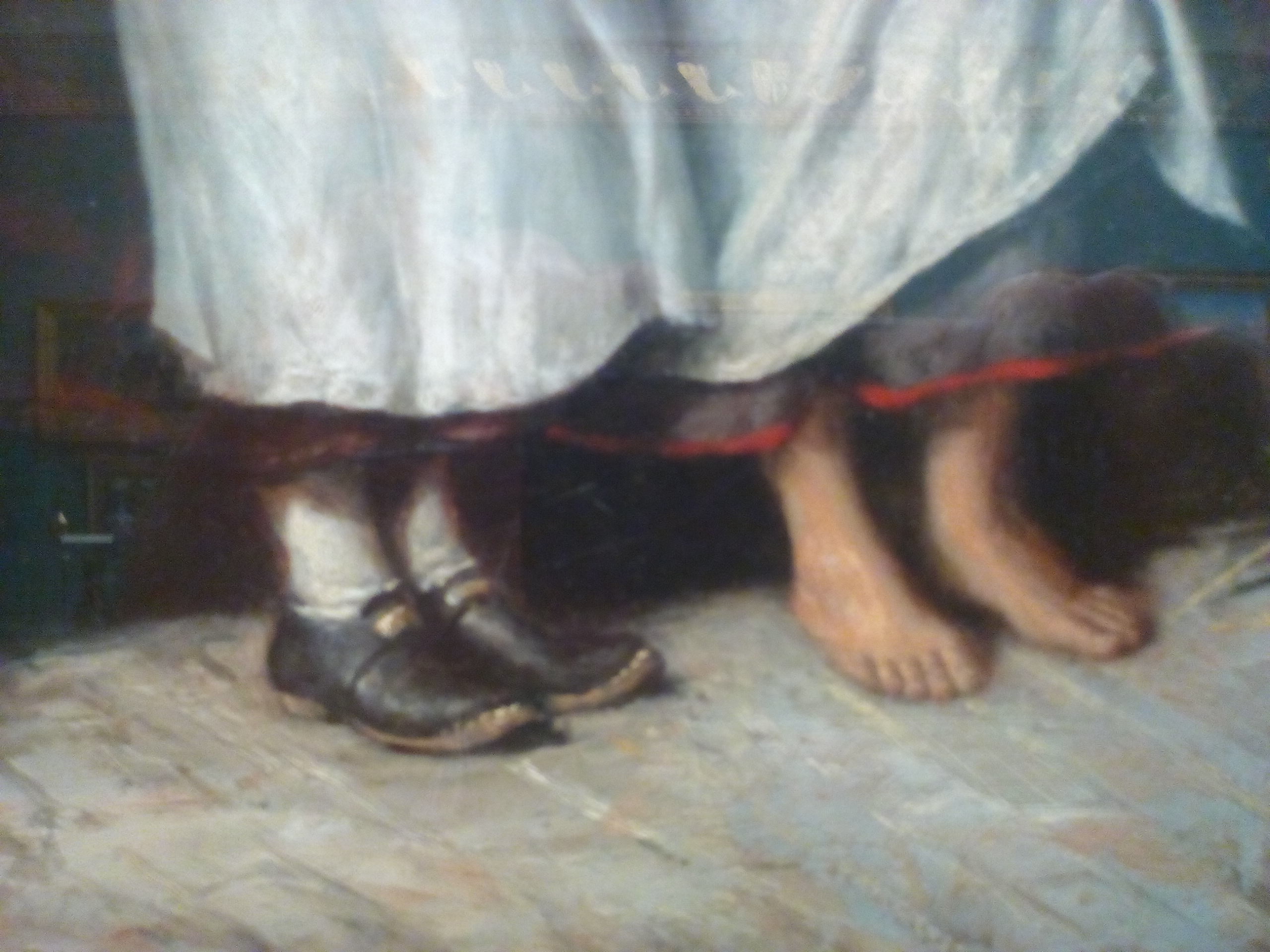 Or you could make the whole thing out of wood, like other types of clog. As the painting below shows, you can engage in tough manual labor wearing clogs. 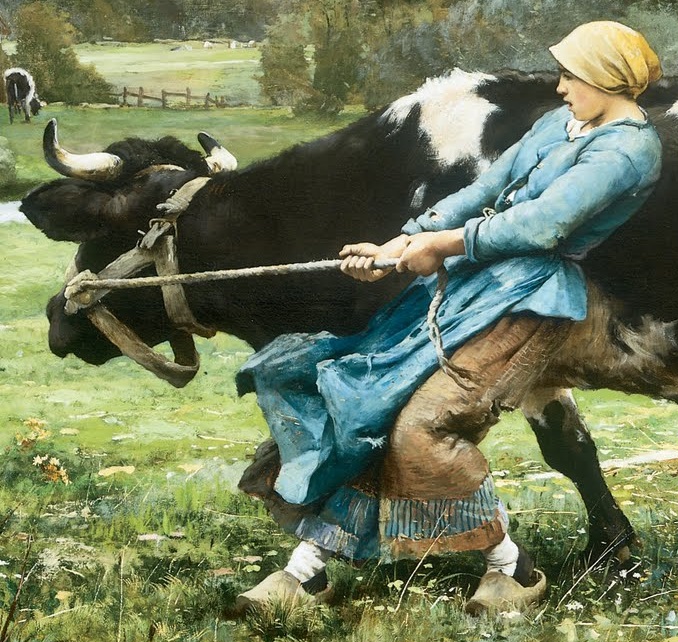 You can still buy wooden shoes today, like the below example from here. 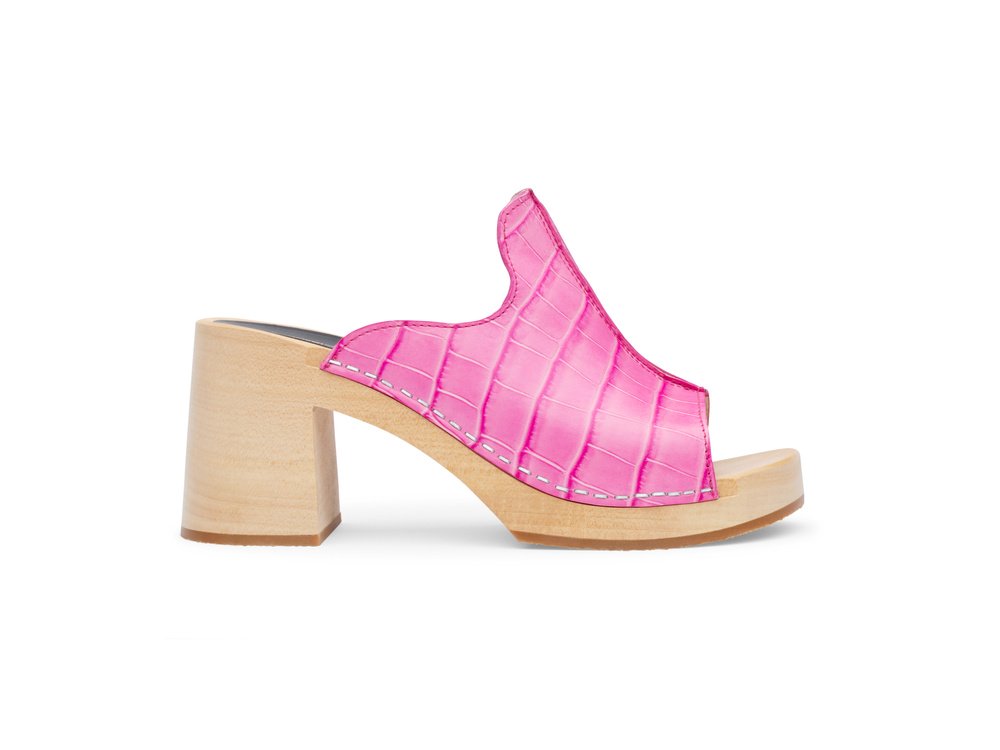 A classic footwear in central/eastern Europe was lapti (I intentionally link the Russian wiki, because it is much more informative than an English one). They are made from a bark (particularly birch), or bast (particularly linden), or straw. That said, I don't think that lapti would perform well in a mountainous (especially rocky) terrain.

As for jewelry, consider nuts (especially walnut), and certain woods. A Google search for walnut jewelry is a good place to start.

A word of warning: cotton does not grow in that climate. They used flax fiber for clothing.

Vegetarianism doesn't prevent the use of animal products - it would only suggest that the materials we obtain do not cause unnecessary pain/suffering/killing. From the animal kingdom, using wool or equivalent for clothes. Similarly hide from dead animals (not killed) should be morally OK - this happened in India, I believe (the protagonist in R.K. Narayan's Vendor of Sweets, a strict Gandhian, gets his footwear made from leather of dead cows, that he ascertains were not killed). Then you also have rubber that could be useful. Jewellery could be made of shells (if near sea shore), pebbles(?), bones (again from dead animals) and wood (not including the obvious precious metals), colored wooden pieces, glass.

If you are interested in a different look for your people, latex has been used by humans for thousands of years. Latex can be made into provocative and practical clothing. 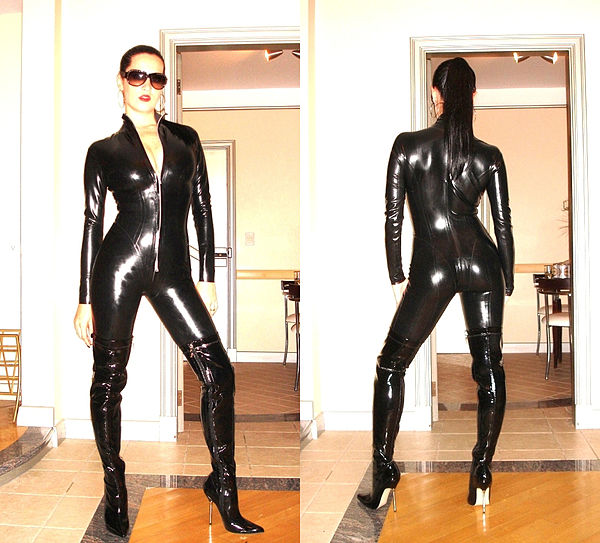 It has similiar characteristics as regular leather and has seen some wide use in the vegan community for purses, wallets, belts, etc.

Dandelion milk contains latex. The latex exhibits the same quality as the natural rubber from rubber trees. In the wild types of dandelion, latex content is low and varies greatly. In Nazi Germany, research projects tried to use dandelions as a base for rubber production, albeit failed. It's not impossible.

Do they have an aversion to metal?

There are already some excellent answers for shoe materials. I focus on clothing. The OP specifically asked about celebratory clothing. In most cultures, celebratory, ceremonial, and ritual clothing are luxury items, i.e. expensive. In this answer, I explore some expensive vegetarian and vegan fabrics and fabric art techniques that could be used to make luxury clothing.

This was already mentioned by the OP, but there are a lot of decorative uses of metal, jewels, glass, and semi-precious stones.

In addition to jewelry, these materials can also be added to clothing as metal embroidery (Such as goldwork or Assuit), beading, or as woven threads (lamé and cloth of gold).

Rayon was invented in the 1890s and uses plant material to make a fabric with a smooth texture similar to silk. At the time, it was called artificial silk. Depending on the technology of your civilizations, this might be an option.

Just for fun, I also looked into how hard it is to make synthetic fabrics like nylon. I'm not a chemist, so I was surprised to find out that you can make nylon in a beaker at home if you have sebacoyl chloride and hexanediame. More research is needed for a full Andy Weir style solution for the resources needed to source the two chemical components, but I thought this was a promising start.

In our history, the discovery of these chemical processes made fabric production cheaper, but of course, the chemists guild might be protecting their new manufacturing method as a trade secret and setting an inflated price for their novel soft and slinky fabric that is this season's must-have item. Or perhaps, rayon or nylon is a lost invention of a previous civilization, with only a few existent garments handed down across generations.

Found animal material such as feathers, seashells, shark teeth, ambergris, found bones etc. are vegetarian, and have also been historically valuable as jewelry and decorative objects. For example, cowrie shells have been used as both currency and jewelry

Oral stories and birch bark scrolls seem to indicate that the shells were found in the ground, or washed up on the shores of lakes or rivers. Wikipedia

Human hair is sometimes considered vegan because the producers usually donate the hair of their own free will. In the Victorian period, human hair was often used for jewelry. While human hair is not ideal for making thread, a technique similar to wig-making could be used to make human hair "furs".

For celebratory clothing, in the Pacific paper cloth and bark cloth are alternatives to more familiar fabrics. These traditional cloths are expensive labor-intensive fabrics used for ceremonial clothing.

Some dye-stuffs are simply very expensive. The most famous examples are animal-products (i.e. Tyrian purple), but plant-based expensive dyes also exist, such as saffron. Logwood (a black dye) was even a target of piracy.

Many valuable fabrics are simply labor intensive to produce such as handmade lace, embroidery, tapestry, and dye techniques like ikat. The base material doesn't matter much whether it be hemp, linen, or cotton. If it's labor intensive, it will be a luxury good, and the members of your society will value it as a decorative item regardless of what it looks like because it will be a status symbol.

For example, black was once a status symbol color because it required multiple layers of dye to get the darkest shades. The dyes used were woad and indigo, both of which are plant-based. Conversely, white was also a status symbol because of the cost of keeping white fabric clean.

The style was very often worn in white to denote a high social status (especially in its earlier years); only women solidly belonging to what in England was known as the "genteel" classes could afford to wear the pale, easily soiled garments of the era. Wikipedia

To summarize, all you need to do is emphasize that the celebratory clothing is expensive to source, manufacture, or maintain, and it will follow naturally that it has special cultural status.

For jewelery, your civilization could use wooden amulets, bracelets, necklaces, and so on. Wood dye could be made in several colors, depending on the availability of flowers.

Not the answer you're looking for? Browse other questions tagged humans earth-like culture clothing or ask your own question.

41
What's the point of clothes?
14
How would society be different if humans possesed natural fur covering?
26
New tech, old clothes
4
Proper clothes for inhabitants of a planet of hats
4
Old Clothes In The Future
9
How to Design Clothes for quadrupeds? (Otherwise: Quadruped propriety in an intelligent, clothed society?)
7
Would wearing clothes over fur be uncomfortable?
4
Wearing vs Growing Clothes
5
Society of producers, humans who can produce solid material from their bodies and it is used to make clothes, tools and buildings