How would WW1 trench warfare be fought if a biological weapon was released on one side by the other?

Sawdust bread, trenches with mud reaching up to your ankles, artillery pounding each other nearly 24/7, troops crossing no-man’s land only to be cut down by heavy machine gun fire...

Trench warfare truly was hell. Both sides in this conflict haven’t broken any of the rules of war yet, that is, until now. One side has developed terrible biological weapons. They deliver it through multiple methods: pounding the enemy lines with disease filled artillery shells, dropping said shells from bomber aircraft and dipping the infantrymen’s bullets into a special solution that contains the diseases.

The side who invented the disease has the cure. They MIGHT share it but only if the other side surrenders unconditionally.

As is expected of a prideful nation, the other side didn’t give up that easily.

They will continue to engage in battle even with the disease on the loose and since the other side broke the rules of war, they plan to break it as well. By shelling the enemy lines with nerve gas they might break the gridlock of trench warfare.

What measures can be taken with WW I era medical and military technology to reduce the risk of infection to the soldiers manning the trenches?

warfare diseases medical
Share
Improve this question
edited May 6 '20 at 14:18

There are going to be cases of this dread disease on both sides. Both sides have the germ now. If I am attacked with germs, then I have people dying of the disease I have plenty of fomites / spores / whatever to load into shells and send back.

The inventors are going to have to ramp up their cure efforts to keep their soldiers fighting and make it available along their front. They will want the cure as close as possible to the front lines to keep well people well. That offers the possibility to capture the cure from its inventors. Or capture soldiers and ask them if they were treated with the cure; a soldier will not know molecules but can describe a pill, a shot, a soothing unguent etc. Or best: make it known that your side will pay handsomely for samples of the cure and count on a deserter to bring you some.

There was enough science in the 1910 to work on a project like that. A treatment that could cure infection would be one of three things: chemotherapy like Salvarsan as was being used against syphilis, or immune based therapies which would be either a vaccine or plasma from immune animals or individuals.

Medical science is not that exciting for a war fiction. More exciting is more war. Once the side without the disease captures and can make samples, that side can take germ warfare up a notch using techniques developed in later wars. Attacking crowded cities and civilian targets is something the inventors of this disease are not doing, according the the OP. But it would be a more effective use of germ warfare than painting it on bullets, and a surprise. By the time the disease makers understood what had happened they would have a scramble on their hands trying to contain the damage.

The biplane crop duster is pretty cool, but ideally this would be done covertly, and the epidemic in their cities blamed on the authorities of that country. 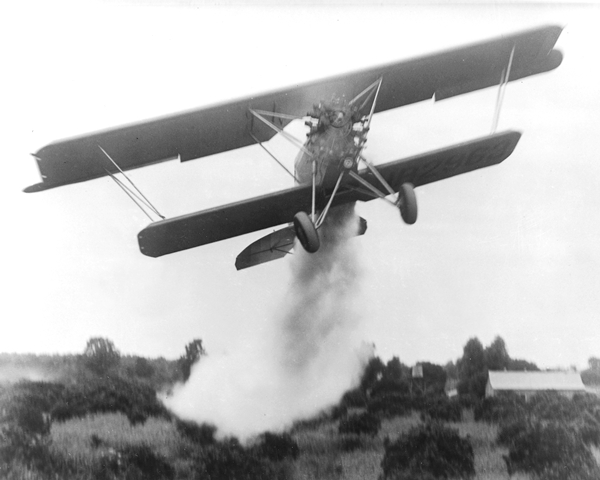 In the reality of WWI, once one side "broke the rules" the other side followed suit in a terrible tit for tat contest. German gas attacks provided the Allies the excuse to carry out retaliatory gas attacks. British flame throwers were rapidly copied by the Germans. So once word got out that one side or the other was using germ warfare, all the arts and sciences of the other side would be thrown into producing a cure for the existing disease, and new diseases to fling against the other side.

Of course, while Biological warfare is perfectly feasible, it is also uncontrollable, which explains why it hasn't been used in any formal sense since early modern times, and research has essentially stopped in the West in the 1970's. The current pandemic crisis of 2020 is a perfect illustration, it started in China (through whatever means) and rapidly spread through the country, then jumped over borders and rapidly spread throughout the world. Selectivity of the targeting is entirely non existent, and it attacked friend and foe without any sort of distinction. This is so uncontrollable and unpredictable in its effects that no sane or sensible polity would even consider this (consider the political and economic fallout against China that is happening regardless of how the virus jumped to human hosts. It could hardly be worse for them than if it was a deliberate release and attack).

So while biological warfare was known and understood in WWI, there was enough understanding about how it worked that no one would unleash it unless they were on the brink of total societal collapse or annihilation and wanted to use a "Sampson option" and bring everyone down with them. Any time before that, the side using bio weapons would risk having their society crippled or destroyed by the disease spreading out of control back into their own armies and population.

For the men in the trenches, there is likely little that can be done once they are exposed. Trenches were incredibly unsanitary places, despite the best efforts of the troops living there. With human waste due to poor sanitation, human and animal remains, cramped living conditions and difficulties maintaining personal hygiene, once the pathogen breaks out in a trench line it would undoubtedly spread very quickly as they did in real life

Once commanders become aware of this, it is likely that they would isolate battalions from each other to prevent the mixing of any troops between them. If a section of trench became infected, they would probably just be quarantined from any other units along the line and allow the illness to burn itself out. Considering how densely packed troops were, allowing any sick men back could decimate entire regiments.

On the bright side, once a section of the front has been infected, any attempt to attack by the enemy would be suicidal- any action as small as a trench raid could possibly bring the infection back to their side of no mans land. Trench raids by the few infected troops still capable of fighting could be done out of spite, with the aim of spreading the disease to them. (Lobbing cans of their human waste in to the trenches could easily take the place of grenades and mortars)

This would probably cause the front to grind to a halt- the side with biological weapons might choose to evacuate most of their troops from the foremost trenches, in case any artillery shells containing the disease fell short.

Work behind the line would continue on treatments for a cure, but at the front, ground engagements would probably cease as the disease burns through the trenches.

It is possible that this would result in "victory," but I think the cost would be too high. I'll also freely admit this overlaps some of the other answers.

Not the answer you're looking for? Browse other questions tagged warfare diseases medical .

1
How to survive a bio epidemic?
6
Would the zombie virus spread in small-town America?
5
Machina Plague: Spread
3
Machina Plague: Quarantine
1
If a character was starved for a long period of time but was able to recover, what would the permanent side effects be?
6
Fictional Space Plague - Pandemic - Does this timeline make sense?
6
Lethal Pandemic
12
Would a somewhat benign "vampiric" virus be doomed to infect everyone?