What would we see driving through a country or coastline of a distributed and hardened Hydrogen energy infrastructure?

I could describe the energy infrastructure of 15th century Holland by describing colorful windmills set up to drain swamps, saw wood, power woodworking mills, and process food. Dutch carpenters busily constructing a fleet of ships from cut lumber emerging in water troughs while logs are hauled into the mill by oxen, mules, or cattle.

I want to do something similar in my world. I am driving through my landscape in my wonderful ecologically-friendly hydrogen-powered economy and I want to describe the countryside, and seaside with elements of the power production infrastructure. Based on the answer to this question about hardening the complex energy infrastructure against hostile attacks, what does the distributed and redundant energy production with reserves look like as we drive down the highway? Because we have redundancy and are not producing at 100% capacity, maybe there actually are windmills creating pressure for steam reformation instead of wind turbines? Maybe Hydrogen is being pumped to homes blended with natural gas?

I choose to put the facilities near the highway because logistically and culturally we tend to put power production within easy access to roads and/or rivers (for raw material delivery), and away from residential areas. This has not changed in this story.

Part of the trip will be over coastal water (where tidal energy might be being harvested and packaged), and part through the countryside (where other methods will be used).

I'm looking for a description of the types of small(ish), distributed energy production facilities I drive by as well as the power distribution, storage facilities, etc. in this society which is hardened against single-point energy disruption. Consumer hydrogen is being made, distributed, (and maybe stored) while raw materials are being processed to make it. Nothing is blowing smoke, and no fossil fuels are to be found (except clean abiogenic natural gas) which in some part forms the carbonless Hydrogen economy infrastructure. Maybe greenhouses line the facilities where CO$_2$ from this process is helping crops?

I think the key difference from what we would see today is, no large centralized power plants, refineries, or solar farms - single points of failure. Facilities are not mega-million dollar engineering marvels, but an integrated net of simpler ways to convert whatever into a consumable Hydrogen product (maybe an LH2 tank or fuel cell?). Nothing we see is a "critical" component of the energy matrix - everything is replaceable or even modular, and we are tapping many energy sources to produce a standard consumable energy product. Also missing are gas tankers along the highway - but maybe they're carrying something else?.

After war-hardening the system against any threat with low-cost and replaceable components, What does a distributed and redundant Hydrogen infrastructure look like to a casual highway traveler? - the most likely scenario given we've accomplished this.

I'm hoping for two elements in the answer:

Since you have stipulated a distributed energy system and hydrogen is an energy carrier rather than a primary energy source, the landscape will be filled with repetitive iterations of hydrogen generators and pipelines. Since the hydrogen is being sent to houses, much of the infrastructure will not even be visible, much like natural gas pipelines in residential neighbourhoods.

I would imagine the general vision would be a smallish group of structures around a body of water. The structures would be small thorium salt nuclear reactors and associated power generation, electrolysis equipment and gas compressors. Perhaps to ensure everything is as compact as possible, the generator will be a supercritcal CO2 turbine, since these are almost an order of magnitude smaller than conventional steam turbine generators. While the system would work parked over a well in areas with large aquifers, bodies of water also make dealing with waste heat easier. The cloud of vapour or mist hovering over the large pond or small lake would be a clue to the nature of the installation. 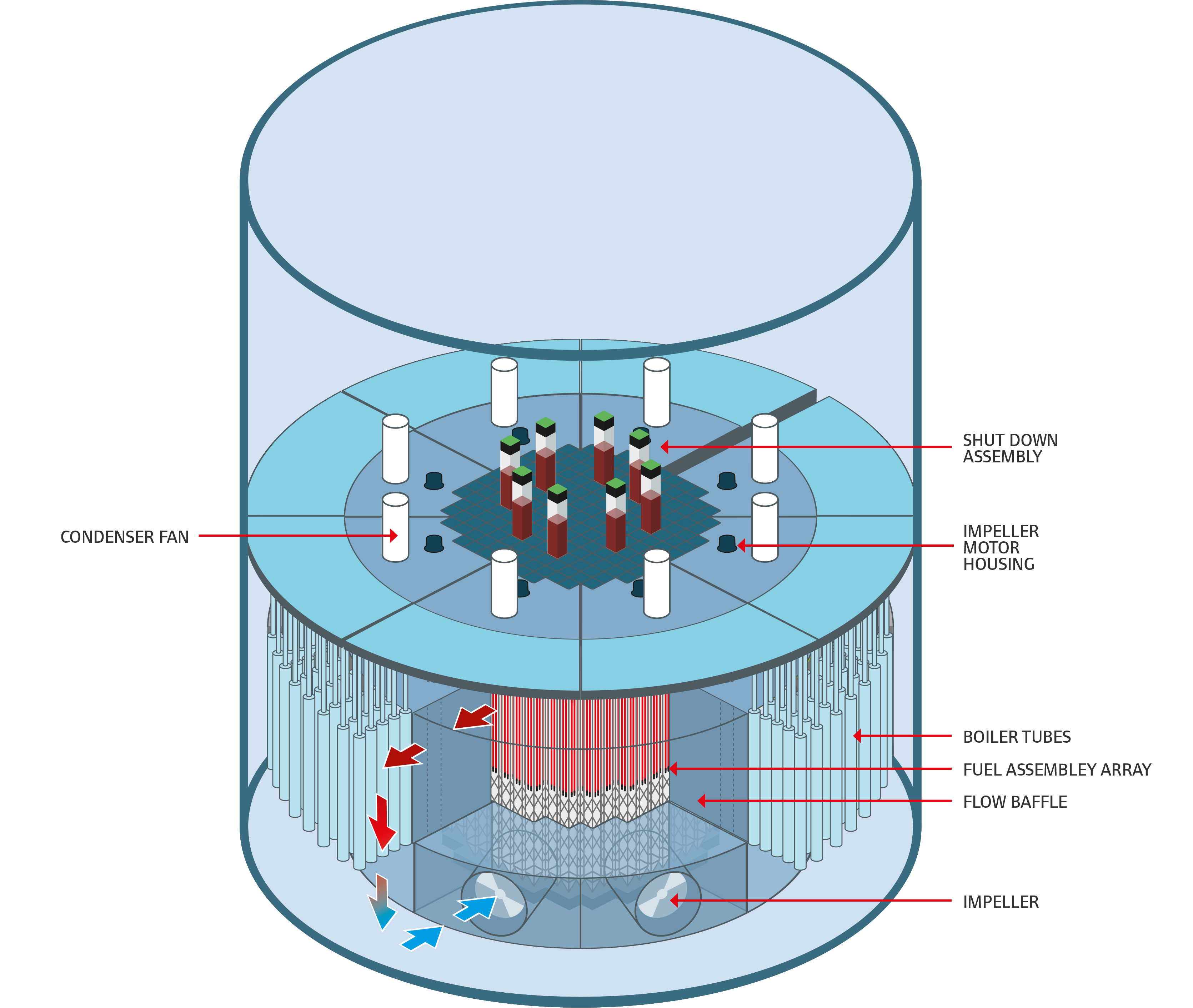 Thorium salt reactors can be very simple and compact

This setup would also provide electrical energy to each "cell" of the system, and it would make a certain amount of sense to bury fibre optic cable in the same conduits with the gas pipelines and electrical cables for communication needs.

In more rural districts, there would be the occasional pumping station to ensure the pipeline maintains pressure, but once again it would be an unobtrusive structure, perhaps well off the roadways and fenced off or hidden behind a "beauty screen" of trees. 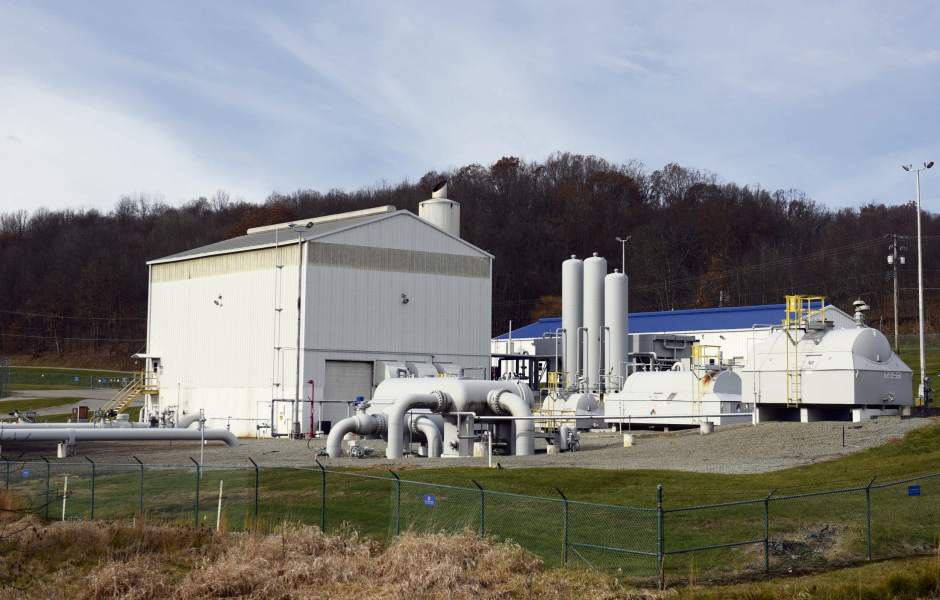 Natural gas compressor station. Since the OP's system is distributed and needs shorter pipelines, the structures will be much smaller

Why Thorium salt nuclear reactors? They can be built as small units ideal for distributed power generation. They can be built on assembly lines and thus relatively cheap, and the molten salt system is inherently safer than conventional solid core uranium reactors (overheating causes the salt to expand and naturally reduces the criticality of the reactor), and not prone to proliferation (the byproducts of thorium fission are not recoverable to make nuclear weapons).

They are also high energy density, reliable and not tied to day/night cycles or the variations of winds or tides, which is what a modern industrial civilization needs. Variations in power load could be met by burning a fraction of the hydrogen in gas turbine generators either on or off site. 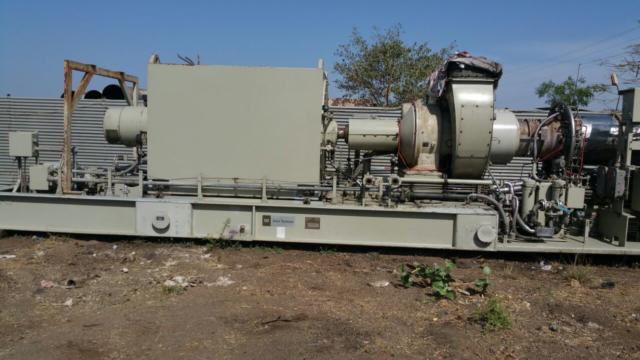 4.7 MW turbine generator set. A small building to enclose it and you're set

So it would not be very picturesque, but then again, you are asking about industrial infrastructure designed to be built and installed repetitively across the country. This implies the units need to be small, modular and mass producable. The population is not going to be too interested in seeing it, so the buildings will be unobtrusive, and generally screened from view, well off the roads and surrounded by a berm, high fence or beauty screen of trees. 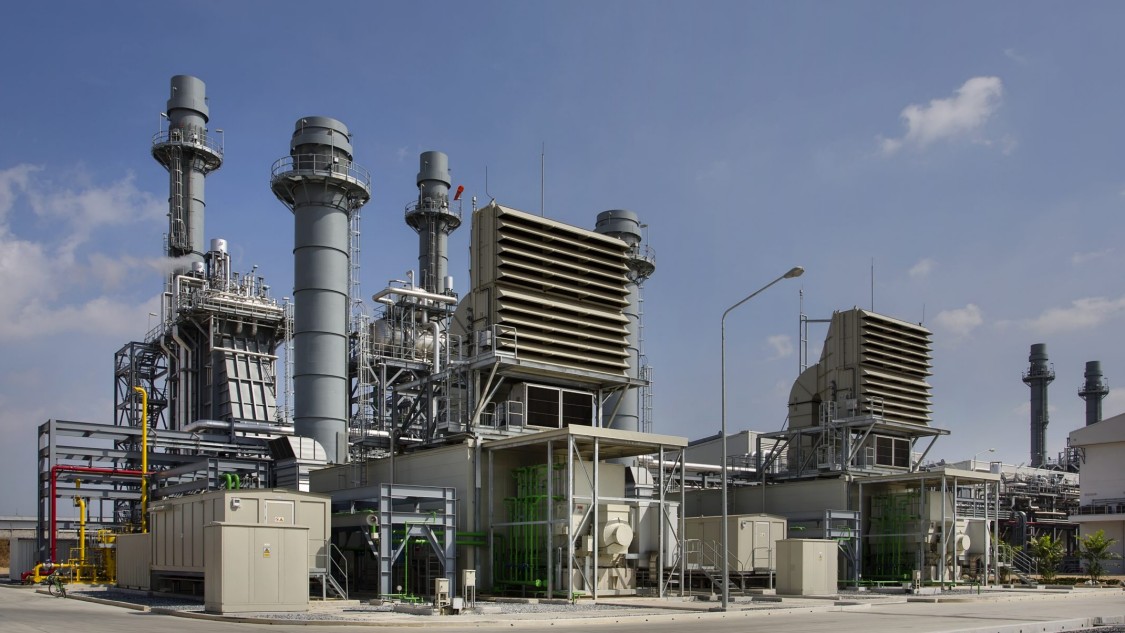 You will see one of these everywhere

The primary clue to the location of these stations will be the availability of bodies of water to supply raw material for H2 generation and a heat sink for waste heat from the equipment.

Not the answer you're looking for? Browse other questions tagged warfare energy power-sources .

0
Can a secondary fuel economy ever be hardened against attacks?

4
What forms of ammunition/munitions could people realistically manufacture or recycle when modern infrastructure and society is collapsing?
7
On the viability of living balloons
3
What would be the most practical raw fuel for a hydrogen economy?
0
Can a secondary fuel economy ever be hardened against attacks?
5
Are Alpha and Beta-Voltaics the solution to the energy storage problem in Scifi?
10
Can an open canal loop transmit net positive power over a distance effectively?
1
More power, more plasma?
6
Energetics in a reducing atmosphere
5
Monoreactant pathway for electrical power and thrust using only hydrogen?
5
What can run the condensers on this Hell Train?