While building my sifi world I dug into ftl-travel and encountered these mean bullies, causality and relativity. They told me I can't have faster than light travel, because effect can't precede cause and it is easy to violate that using ftl. I really don't like that.

My idea to circumvent causality and time travel issues is to have the ftl machine send out an "editing wave" before the ftl event happens. The editing wave will be emitted from the entry and exit point of the ftl tranfer and all of the other fixed ftl points at the same time. It will be calculated what needs to be changed in the current state of information, energy and matter in the universe to ensure that no causality violation happens. There is no time travel, as the universe is only edited at light speed. The events that would have violated causality would still have happend, but their effects would be wiped out, preventing them from preceeding their causes. Essentially it is like committing a crime and then cleaning up so thoroughly that it seems the victim never existed in the first place.

This includes wiping out the entire existence and history of the vessel and it's crew. The editor considers this to be the path of least resistance. The ship arrives at the exit point as a strongly edited copy and the crew will have little memory and only vague intentions left. Any investigation will show that the vessel, the crew and the information were spontaneously created by a freak quantum event.

It is not possible to construct new ftl points, as they are artifacts of an elder civilisation and they prevented that anyone following them could mess with the universe the way they did.

I'm perfectly aware that this is $handwavium^2$. But I wonder if:

NOTE: I wasn't sure whether to put this on worldbuilding or physics? Any opinions on that?

Since you mention the FLT drive uses wormholes, your problem is already solved without your whole editing wave thing. A wormhole does not violate causality because it does not actually let you go faster than the speed of light. Instead it is a short-cut by which you travel at sub-light speeds over a much shorter distance to get between two points that are very far away. Think of it like this:

Imagine you have a lake that is 100km across and only 2km wide. You want to get to the otherside in under 1 hour, but the speed limit is 60km/hr. If you go around the lake at 100km/hr you would be breaking laws to get there pissing off the police. If you had a bridge across it, you could get there in 2 minutes without breaking any laws. 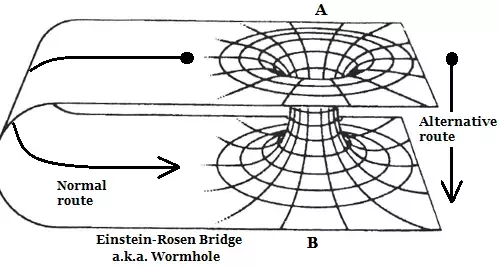 What makes this more complicated as Renan points out below is if the ends are framed to objects on either end and not each other, then this would create a freebee frame shift allowing you to effectively come out of the wormhole at a different speed than you went in for no extra energy investment creating a causality violation. This could probably be solved if your wormholes had some kind of drag factor where you had to expend extra energy while traversing the wormhole to make up for the stolen acceleration, which could in most cases be done with a less-than-relativistic energy expenditure.

But let's say your Wormholes don't do that and they just break special relativity because they can. Or maybe they don't really violate causality, but the intergalactic authorities perceive it as a violation; so, you need to hide your tracks, to keep them off your back. We 1st need to consider how the authorities would know you've done something wrong. They would presumably either need a technology for detecting violations of causality, or they would need to observe your ship in two places that it does not belong while presumably not violating their own rules.

In the first case, being 0.0003*C out of frame would be a pretty small violation that you might be able to explain away as a random cosmic event. Erasing a ship and crew from existence or creating a new one would be a huge violation of causality, and attract a lot more unwanted attention.

In the second case, let's assume they have long-range sensors that can see everything everywhere. If you jump 100 light years, it will take them 100 years for the proof of your crime to be detected, at that point, who cares? You've already grown old and died before they can do anything about it.

Lastly, if these aliens don't like causality being broken, then they would surely want to destroy any ship that just materializes out of nothing even if they can't prove where it came from. So, I don't foresee editing your past out of existence as being a deterrent to such an authority.

If you want to edit something, I would suggest edit your ship after you make a jump so that you blend in with your new location while leaving your past self alone. Scrub exotic particles from your ship that might have been introduced by the wormhole, apply radioactive decay to the alloys in your ship to make it look old enough to be a generation ship, fabricate a fake timeline of your ship flying to where you are from some time originating in the past before you left, things like that.

Why not instead go for a theorized FTL drive that may be possible in our universe and doesnt have causality and relativity get in the way? I present to you the Alcubierre drive: https://en.m.wikipedia.org/wiki/Alcubierre_drive

This drive doesnt make the object move, but rather the space it is in. And that space can move faster than light without the object experiencing any of the relativity and causality problems because as far as the universe is concerned, the object inside the field is barely moving at all.

As for your solution, since the editing wave has to travel the speed of light it would mean that you first have to wait for that wave to actually get there.

Edit: for those who still think relativity and causality apply, watch this: https://www.youtube.com/watch?v=94ed4v_T6YM

Edit: in the discussion it came up that the particles that keep the bubble up have to travel FTL at some point. But it would be a smaller handwave to tunnel particles in place than to completely edit out all your actions before and after the travel (and what else can you edit? A planet?)

My advice would be to not bugger with ftl instead work on instantaneous travel through the manipulation of time and space. I am sure you have heard the concept of worm holes or strong gravity effects, start there. Ftl, is possible for certain things, for instance, space can travel faster than light. I would suggest you look at Star Trek for inspiration here, they have spent a lot of time with these concepts. Voyager introduced the concept of a "slip stream" drive in season 4 or 5 which might interest to you.

Not the answer you're looking for? Browse other questions tagged physics time-travel faster-than-light wormholes or ask your own question.

6
Alcubierre warp-lanes, what is the most stable way to create them?

6
Can this version of the Alderson Drive be used to violate causality?
9
hypothetical criteria for non-paradox FTL
5
galactic travel : an alternative to FTL
58
Are there any ways to allow some form of FTL travel without allowing time travel?
1
tachyonic FTL travel?
8
Can we safe FTL from paradoxes by using a Multiverse?
9
Is three-dimensional time consistent and paradox-free for time/dimension travelers?