A while back, I asked if FTL drives mandated time travel, and I was referenced this previous question:

Are there any ways to allow some form of FTL travel without allowing time travel?

Where the top-rated answer provides what is apparently a very-well crafted explanation for why any given FTL system can be exploited to create time travel. Unfortunately, I don't fully understand it. Looking at the 'Time Travel Happens' section, though, where the scenario is illustrated with time cones and world lines, a thought occurred to me: Could we exploit this system by going backwards? That is, can be exploit the same mechanics that turn FTL travel into time travel in order to create FTL travel without time travel? I'll try to explain what I mean.

Here's the 'time cone' illustration from the question I'm referencing. 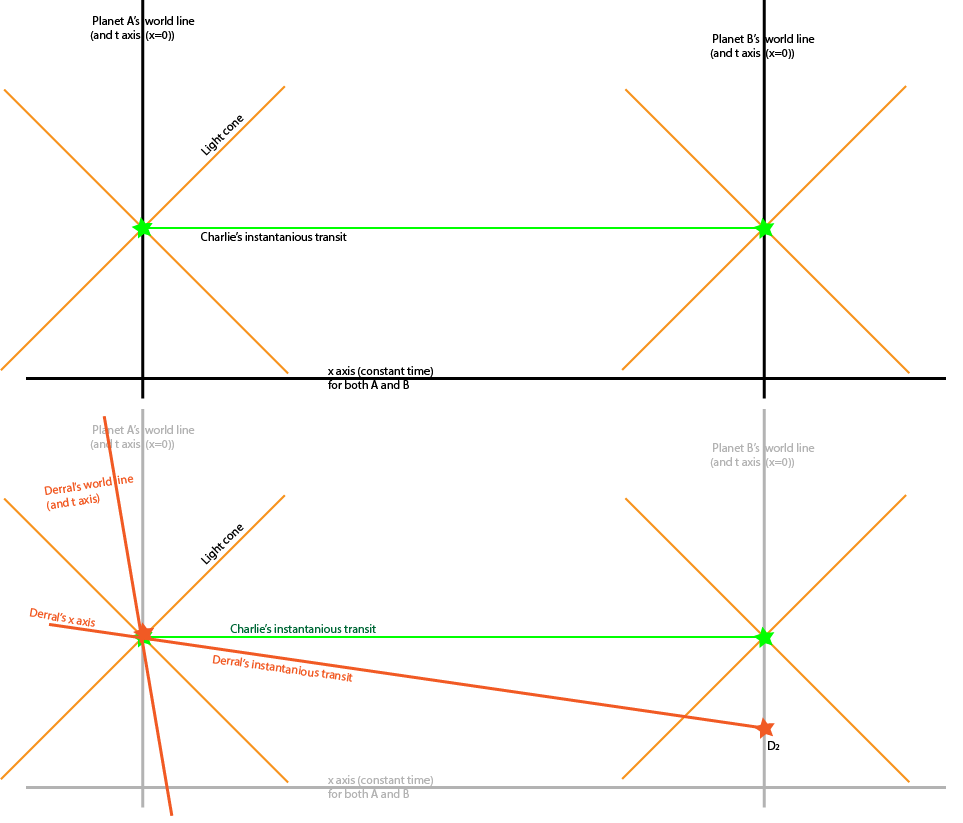 IF I understand it, Derrel is traveling at a relativistic velocity in such a direction when he engages his FTL drive to go from A to B, the horizontal line representing instantaneous travel 'tilts' downwards, below the x-axis, creating time travel, which we don't want. This can happen with any speed between infinite speed and the speed of light, because depending on your direction and velocity, your 'travel line' can be tilted up to 45 degrees down. I'm not sure if I'm talking gibberish or not, but if you had a ship with the ability to reach, say, 90+% of the speed of light using conventional engines (somehow), AND had an Alcubierre drive that could take you up to exactly (or slightly below) the speed of light, couldn't you use relativity to 'tilt' your line of travel 40 degrees down, so that when you engage your speed-of-light Alcubierre drive, it's only 5% above the horizontal, and will therefore get you to your destination faster than light, without actually being faster than light?

I have no clue what I'm talking about, don't go easy on me.

As mentioned, travelling and time are linked. Time and space are relative. If you move close to the speed of light, your time moves slower to a non-moving observer.

To resolve this, the ship isn't the only one that moves. If it moves 1km/h in one direction, it moves the universe 1km/h in the other direction. If both move faster than the speed of light, you'll experience the same time travel, so you'll arrive at the time the journey took. If you travel 4C distance at 2C speed, you'll arrive there in a year as the universe is moving 2C around you. As the whole universe moves, it'll be the exact same for all people in it, making no difference for them or physics (besides the part of travelling faster than C).

OK, anyone with a basic knowledge of physics will shoot what follows down in flames. But;

Your basic problem is that you are trying to separate one vector (time) from 3 others (space). Its called space/time for a reason and trying to separate them is like trying separate one of the 3 physical dimension from the other two. So for the purposes of your story don't try. Assume by default that you cant travel in time without traveling in space and vice versa.

So using the old "killing Hitler trope" I am a brilliant scientist who invents a time machine and hates Hitler (cause like who doesn't?) So I grab my revolver and set the machine for 100 exactly years ago because obviously I want to kill him before he has a chance to start his murderous reign. It works and I'm magically transported back in time 100 years.

My problem I'm now also exactly 100 light years from Earth and I cant interfere with Earths time line no matter how hard I try because light relaying any message I send or action I take back to Earth won't get there for 100 years. Right after I left.

Now lets say by chance I landed on a Earth like Planet with friendly aliens who are happy to help me build a new 'time' machine and send me home. They also set it exactly for 100 years in the past. If it takes 3 weeks local time to build I get back to Earth 3 weeks after I left. From the Aliens perspective I have again traveled back in time (into their past) but again nothing I can do can change that. Importantly traveling either way I've had no interaction with the physical universe.

The thing is there is no such thing as FTL. All the hypothetical methods of beating the speed of light I read about like wormholes or the Alcubierre drive' don't 'work' by allowing someone to exceed the speed of light they work by warping space in such a way that the traveler does not physically interact with the 'outside' universe while traveling. Like my time traveler if they work at all they have to do so in a way that cannot interfere with causality.

In the case of wormholes there are configurations that can in theory allow you to beat causality (travel back in time and change reality) and there are ones that won't. If wormholes are real the overwhelming likelihood is that the the former cannot exist (they collapses if they are attempted) while the latter do work. Importantly they do so by shortening the distance between 2 points not accelerating the traveler past the speed of light. Likewise while in the wormhole there is no way to interact with the outside universe.

I can hear the forehead slapping from trained physicists already.

Your referenced solution proposes like four or five ways why or how you might have ftl travel without time travel. I suggest you go back and read them... the most known trope is that you have to leave the gravity well in order to avoid those tidal effects of relativity on space time, so you avoid the observer problem to a degree.

He also proposes that, for your ftl drive to work, you first have to match your target's reference frame, which first involves much use of beautiful torch drives you can render in high quality, and then only then allows for a jump.

58
Are there any ways to allow some form of FTL travel without allowing time travel?
8
Can we safe FTL from paradoxes by using a Multiverse?

10
When could space travel (including FTL of any kind) and other tech be common?
58
Are there any ways to allow some form of FTL travel without allowing time travel?
12
How does paradox-free FTL travel affect the details of my story or gameplay?
8
FTL in a relativistic universe: can my scheme be exploited to make a time-machine?
6
Alcubierre warp-lanes, what is the most stable way to create them?
4
Non-causality-violating FTL travel. / Can omnipotence beat causality?
8
If an Alcubierre Drive is possible, can you communicate FTL without a vessel?
8
Do Alcubierre Drives Mandate Time Travel, or Just Allow it?