Suppose you had a device with the ability to temporarily give your ship tachyonic properties. Would this allow for FTL? How would it affect warfare in a sci fi universe?

The reason I am asking this question is because FTL seems mostly based on wormholes, foldspace, etc. and to me those don't have the right feel for my story. I am trying to make a military sci fi with a seif contained ftl device with no external infrastructure.

Please explain in layman terms, am not a scientist.

EDIT: I do understand that time travel is a possibility, and will adjust plot accordingly if it presents itself...

Negative rest mass for a particle doesn't actually make much sense in known physics. There are some fields that exhibit properties that are represented as negative masses, but that's more analogous to saying "There's a bite missing from my candy bar." The candy bar is still a proper positive mass, you're just drawing attention to the negative space.

Tachyons, in current theory, are not believed to exist. But if they did exist, they would have an imaginary mass, rather than a negative mass. This is because of the equation for relativistic energy of a particle:

Now if $v>c$, meaning the particle is traveling faster than light, that denominator is an imaginary number, the square root of a negative number. Since current scientific theory assumes that energy is always a real number, that means $m$ must be imaginary, hence all tachyons have imaginary mass.

Now this involves complex numbers, which are a very well tried and tested system for handling equations like this. But they're not always intuitive. In fact, I'll admit it... they're downright confusing sometimes! Fortunately, there is a way to visualize them in two axes, and we're pretty good at visualizing things like that. The typical visualization for a complex number is to have the X component represent the "real" part, and the Y component represent the "imaginary" part. Pure imaginary numbers (like the mass of a tachyon) are always along the Y axis. Pure real numbers (like the mass of a normal object) are always along the X axis. 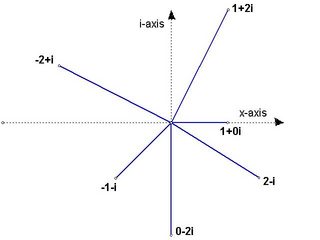 Now one of the really nice aspects of this is that we can use this visual to talk about these complex numbers in terms of magnitudes and angles (formally this is done using Euler's formula). It doesn't change the numbers in any way, but it does let us think about them a little different

Now there's countless forumlae which let you define a process that moves from a real number (your mass before turning the drive on) to an imaginary number (the mass of a tachyon). However, one of the simplest ways is simply to define the process like a rotation. You could choose to make your ficticional drive rotate the mass of the object into the imaginary axis.

Why is this important? Well it matches up well with your desire to have the machine "nullify" gravity while still fitting within the laws of physics (or at least fitting within the laws of physics that a really really drunk physicist might let you get away with). Consider that we have no concept of "imaginary mass" in our day to day life. The concept is just alien. We only know "real mass." Thus if we measured the mass of the craft while the engines turn on, we would almost certainly be measuring the projection of the mass onto the real axis.

For a sense of what that's like, go grab a meter stick. Hold it out in front of you, so that you can see all of the numbers on it. How large does it appear to be? The answer, of course, should be a meter, because you can see the entire long length of it. Now rotate it so that the stick is pointing away from you. How large does it appear to be now? The answer should be quite small because you're looking at the small end of the meter stick. You're looking along the stick so you can't actually see its length. You can only see the end. If you had a magical meter stick that was actually 1 dimensional rather than a long 3 dimensional object, you'd see nothing at all.

Now repeat the process, and watch how the size appears to change as it rotates. It starts out big and ends up small, because you can't see its long axis. This is what the mass of the craft would appear to do when you turn on an engine that could rotate its mass into the imaginary axis. It would appear to lose mass, when really it's just shuffling it over into the imaginary axis.

Now if you do this, you will have to deal with the causality issues. If a tachyon can interact with the real world (such as by rotating into the real axis), it opens the doors for time travel paradoxes that modern physics does not have an answer for. Since we do not observe such paradoxes, the current prevailing opinion is that tachyons either do not exist, or at least cannot interact with the real world. You will have to come up with your own solution to this.

If you are interested in source material for ideas, the Saga of the Skolian Empire is a series of books which builds upon this rotation concept. Primary Inversion is the first book in the series. It builds a fascinating fantasy aspect into this: telepathy. The engines in that world can rotate you into imaginary/tachyon space at any time, but the transition is really hard on human minds unless you are close to the speed of light. Thus humans have to spend a lot of energy getting up to near light speed before going superluminal, while missiles can go superluminal from a standstill. However, the machines cannot communicate while superluminal while the particular telepathy in this book does continue working. This creates a very interesting game of cat and mouse, which may provide you with a lot of great ideas.

First in the more accepted theories where tachyons appear, they are not interpreted as real particles but as mathematical artifacts which highlight an instability (quantum field theory, string theory).

In existing theories which suppose tachyons are a particle they are defined as faster than light particles. It cannot move slower than light because the speed of a tachyon increases when its energy decreases and it needs infinite energy to slow down to the speed of light. Here stops the "consensus" (not really a consensus, there is a lot of debate around the subject). If you go further you are in a mine field where nobody agree.

Consequently I tend to think that you can do whatever you want since even if you follow one specific theory, a physicist could say "That is not science".

But at the end the switching between tachyonic state and bradyonic (slower than light) state is the most questionnable part.

Not the answer you're looking for? Browse other questions tagged science-based reality-check space-travel faster-than-light .

66
Are there any ways to allow some form of FTL travel without allowing time travel?
34
Is there a scientifically plausible faster-than-light communication system?

57
FTL travel is impossible. How is interstellar trade possible?
11
How would FTL travel appear through window of ship?
6
galactic travel : an alternative to FTL
66
Are there any ways to allow some form of FTL travel without allowing time travel?
1
Quantum Entanglement or other means of FTL Travel
23
Metal that glows when near pieces of itself
6
Exploiting Time Travel FTL Mechanics to Create FTL Without Time Travel
47
How long can it really take to calculate a hyperspace jump?