Would it be possible to create a mosquito drone like the one below and use it to inject a target with some deadly poison like Novichok? 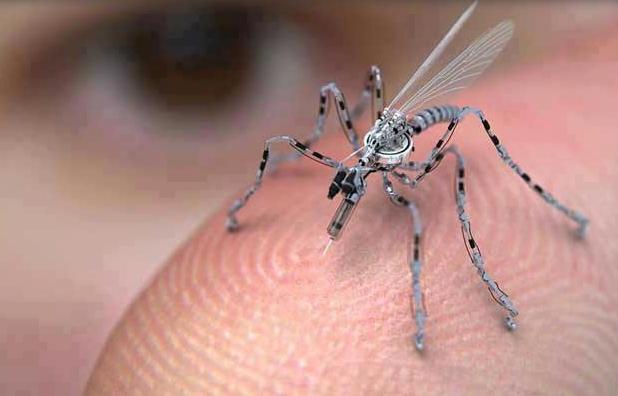 An artificial drone or an armed insect?

So yes, probably, but it would be fragile and difficult to handle.

It's already possible to control live insects via implanted electrodes. As far as I know the technology is limited to relatively big insects like the giant flower beatle or big moths, but as miniaturization of technology advances, smaller electrodes can be fused with smaller insects.

In the case of the moth, the electrodes are implanted into the insect while it's in the pupa stadium and the internal organs rearrange themselves around the electrodes.

A mosquito is really tiny compared to the existing "insect remote control", though. If you don't want to handwave decades of development away, you should stick to a bee or wasp. They have a natural deposit of poison that should be easy to replace (with an artificial container so you don't poison the insect) and the actual sting could be controlled like the flight. They are not as invisible as a mosquito, but most people don't run panicky from a bee because they usually don't sting without provocation.

Not the answer you're looking for? Browse other questions tagged reality-check insectoid or ask your own question.

16
Poisoned close-combat weaponry — practical implementations?
12
How can I create a poison that kills a person after a specific amount of time, and is treatable by an antidote?
5
Is this insectoid species realistic?
6
Is it plausible that current insects will evolve sapience?
9
Magical Insectoid War Machines?
13
Plausibility of deadly air rifles
18
How to protect against killer insects?
25
Building a Syringe Gun
2
Stealthy and hard to sink marine drone made out of… fiberglass and styrofoam