How to protect against killer insects?

In my world, modern humans are at war with elf-like humanoids who are harmed by the touch of iron and steel. So instead of modern tools they use bio-tech and elemental magic. The human army is trying to invade but one of the elves' defenses against invasion are swarms of attacking insects. The insects carry venom but their real weapons are the viruses they transmit to humans.

How would a human army prevent losing large numbers of its troops to insect-borne diseases?

Note: not all the insects carry the same viruses, but all the viruses, built by the elves, are deadly to humans and can spread quickly through the ranks of an invading army.

More information: the insects are a lot like mosquito as far as their form, but they attack in swarms of hundreds like Locusts or killer bees.

Viruses: as I said earlier the insects carry several different viruses. This is done to prevent one simple vaccine from disarming your entire army. All the viruses are deadly and all the viruses spread quickly from person to person by touch. The elves do have airborne viruses, but they won't be using them at this stage of the invasion. Other than that there's nothing in common.

Flaming arrows, blazing trebuchet boulders - greek fire mortars even - as long as it is in a form that can be projected or easily spread, fire will do the trick for a few reasons...

Flames; bugs, like most creature on earth, don't particularly like them, and if they do decide to get to close will suffer dearly. Insects, though hearty beasts, are no more fire-resistant than a cheap nylon teeshirts; after a few moments of flame exposure, they will be nothing more than charcoal, stamped beneath the foot of the opposition.

Smoke; the faithful accomplice of fire, smoke is always one to create a scene; it alone acts as a notorious repellent for many species of animals and insects alike - such as bees, mosquitoes and some types of ant. A bug that chooses to enter the smoke will have their senses stifled and any flight capabilities, effectively defenceless and unable to attack.

Heat; can't handle it, then get out the kitchen, for it is this more than anything that will do the most damage to the insects arsenal. Airborne Viruses are intolerant to high temperatures, "dying" (speculation exists whether they are alive in the first place) if their heat threshold is exceeded, rendering them as harmless to the human invaders as the insects they were created inside (who would be dead. Plain and simply dead).

Fire: the all in one bug-buster!

There are microcristal powders to combat insects (meant to be used vs ants) that clog the joints and work as like sandpaper so every movement by the insect harms itself until the joints stop working. Combine that with iron nanoparticles that are light enough to be blown by the wind. Use this mixture to bomb the battlezone than advance with protective gear including air filters and protection from the insects.

The above harms the insects in the area and the Elves but turns harmless fast enough to not cause lingering harm and/or prevent population by humans.

Cordyceps is a family of fungus's which naturally help prevent any one insect species from becoming too common.

They infect an insect which then feels the urge to get somewhere high and then the fungus sprouts from the body and spreads deadly spores that target the same species. 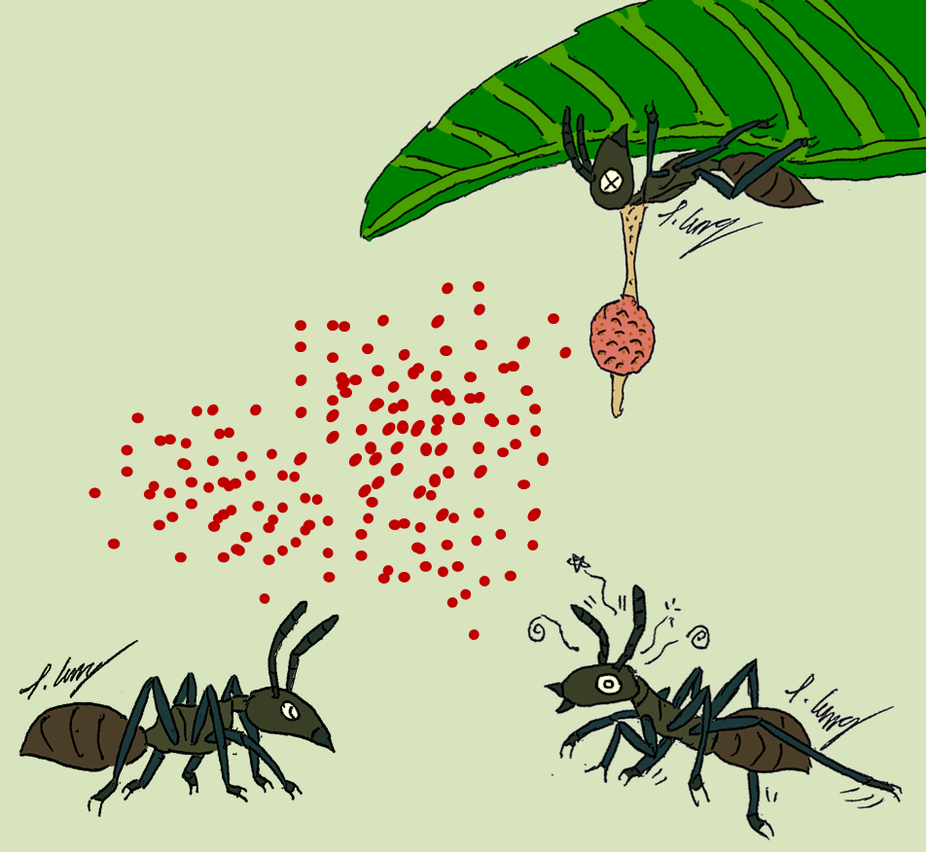 You said modern tech humans, if we had modern tech and were facing someone using stinging insects, particularly if it's a monoculture of engineered insects then breeding/engineering a variant of Cordyceps to target the enemies insects would be a sensible option. 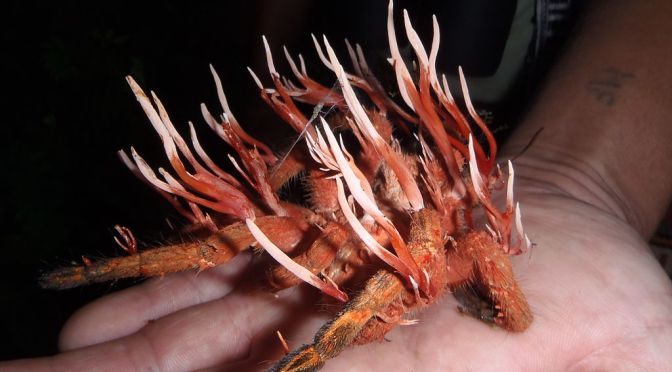 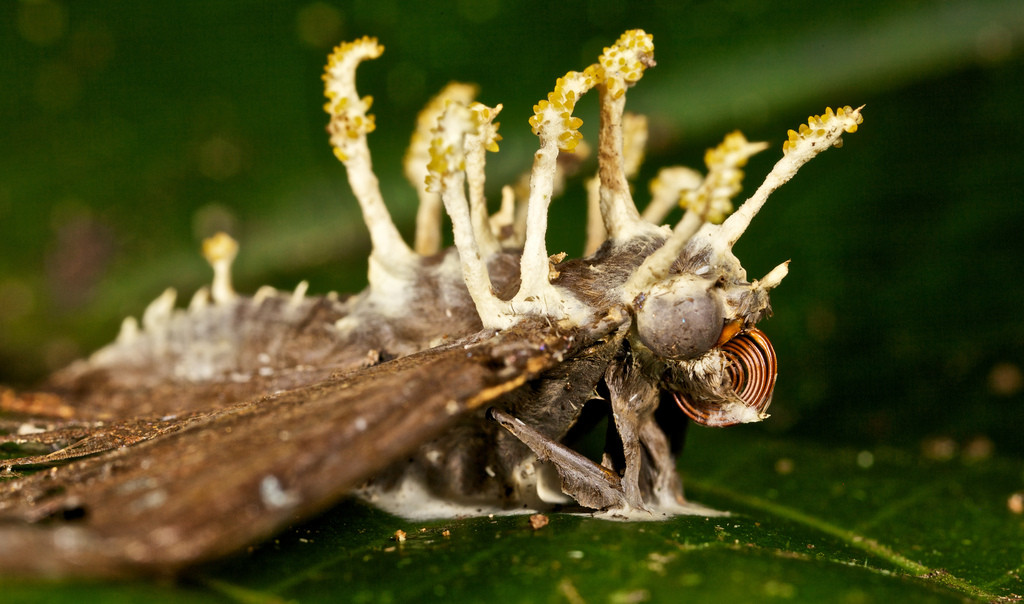 Same was as we do now, formulate an airborne mist that attacks the insect's vital functions. The likelihood is that technological advances will outstrip evolution, so it wouldn't take too long before the Elves primary weapons are disabled and they'll have to think of another strategy.

Self-explanatory, it works against bugs here, it should work just as well against bugs there. (I was going to make a question on how to fight giant-mosquitos but I found it to be too easy) 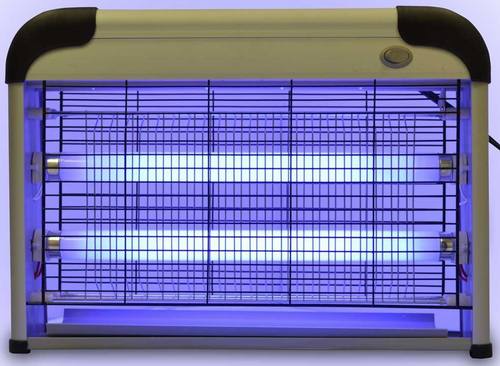 I'm gonna offer an alternative to Harry David's answer on fire. If your modern humans can use any form of magic(I'm assuming they can use some) then they should be able to use chain lightning. Get a few dozen mages on guard and any idiotic swarms trying to fly in gets fried. Of course, they could fly in discreetly. But then that's where your smoke and bug zappers come into play.

These can be set up to lure insects, namely the ones you don't want infecting you.

Whilst it may not be particularly useful on a battlefield, as there are many other smells to confound the one the insects need to detect, it can be used in small enclosed spaces, for example barracks.

Soldiers need to sleep, and insects can be released into an area at any time. It will help against the enemy catching the humans off-guard, and will be best utilized in protecting bases so that if the insects come to attack the humans on their home-turf, they will be lured to a specific area where they can then be easily neutralized.

It can also potentially be used near to the places these insects' breeding grounds. It can make male insects chase each other so that they do not breed with females, and allow successive generations to die out. Whilst the enemy can always produce more, it will be very expensive to do it manually instead of allowing them to breed naturally. Bankrupting the enemy is always a legitimate option.

You should consider the environmental conditions which those weaponized insectoids can tolerate.

Any protection worn by the non-elves would need to function much the same as a beekeeper's outfit: resistant to puncture by stings and chewing from the insects, and have no open seams through which they could enter.

As to the infectious microbes: how are they spread once they exit the stinger apparatus on an insect? Are they transmissible through air i.e. via dust and spittle? Touch? Or does it require open wounds, saliva, genital fluids, that sort of thing?

And having demonstrated that they are willing to engineer diseases tailored to wipe out humanity, it would be very easy to get public support for some "precision" nuking to wipe out this threat to the species.

As with so many of life's other problems, lasers provide a simple and effective solution. If killer insects are bothering your troops, simply set up a few laser defence perimeters around their encampment. Any insects flying within range will be targeted and destroyed in the blink of an eye.

Not only are lasers fun for all the family, but this technology exists (and works) today.

TED Talk - How to shoot down mosquito using a laser gadget

Seriously, you may have to reconsider the scope of your question, because why would you send ground troops in against a virus-laden army when you can drop laser guided bombs on them from a sealed metal tube travelling too high and fast to be bitten?

The technologies used to defend the population at large - and the army camps, etc - against insects, would be the same as we defend against mosquitoes in the real world.

So bug screens in windows and doors; mosquito nets around beds; fogging of populated areas; innoculations; and as others have said, bug spray.

The technologies used during combat would be the same as mosquitoes and bees; so gloves, and beekeepers' hats; and again the bug spray.

Give standard issue tactical bug swatter to every solder 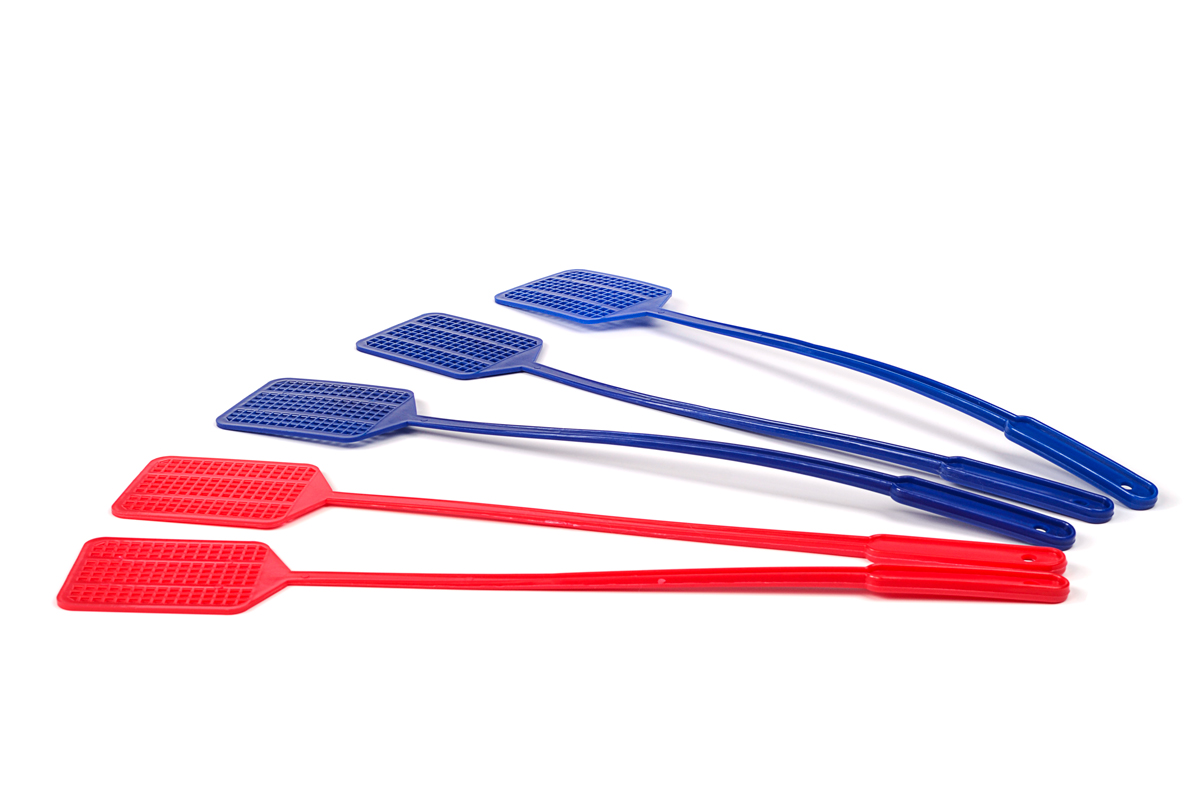 Instead of going head to head, one to one battle, use ranged weapons from a distance. Lowbowmen, ballistas, trebuchets and rockets would make a short work of the elves. If you use explosives, they'd be very helpful eradicating the elves entirely.

As for defense, use insect repellent (as suggested by NuWin). Also consider marching in military transport vehicles (for medieval times, use iron and wood cabins pulled by horses).

Just give everyone of your troops a slightly heavier and modified NBC suit and the insect problem is solved.

Now the real problem is that the troops need to return to the barracks, but it is not too difficult to make a sealed barracks and avoid the insect to enter it, you just need to copy the systems that are used in every factory that work with gold (and I suppose other precious materials) to recover also the dust.

Light things are going to have a problem flying when they face a moderate headwind.

"Human Technologies is about the same as ours."

Only send out armored units. All troops wear respirators and armor that completely blocks insect bites. Flamethrowers and insect spray are standard-issue.

The main invasion force will be mostly tanks and artillery defended by troops based in APCs and fighting vehicles.

Airstrikes make the scenario way too easy for the humans. Drop scatter-napalms from the air, cause as much smoke as possible.

Camp a carrier strike group nearby. The whole war turns into a one-sided airstrike and missile campaign. How lame.

Not the answer you're looking for? Browse other questions tagged reality-check biology magic warfare or ask your own question.

5
Would the zombie virus spread in small-town America?
29
How do I wage war against a collective consciousness?
20
How do elves make their way into the modern age?
4
How to protect your army from weather controllers?
31
How would an army defend itself against mass robo-snake attacks?
32
How to evolve/justify pescatarian elves?
10
Knights vs elvish guerillas
4
How severe can an Iron Aversion be?