How close could another solar system be without adversely affecting our own?

I would like to know how close two planetary systems could be without having an adverse effect on each other. My goal is to drastically improve the chances of having habitable planets near enough that humans having the technology of today could realistically send manned spacecraft to other planetary systems and even have useful communication and trade.

I'm thinking specifically about our own solar system, and to reduce the guessing, let's assume the other system is identical to ours: same sun, same planets. Their "Earth" could be lifeless, I don't think it affects anything.

More difficult to define is what it means to "adversely affect" our own system. I have a few ideas, but these are not 100% set in stone:

A bonus question: Would it change if we imagine a number of these systems packed in a sphere-packing formation? If I understand correctly, it would amount to 12 neighbors equidistant from the Sun.

1. I admit having no clue how much we can detect, so this is one requirement that may have to go.

The other sun should not be brighter in our sky than Venus at its brightest.

This is your tightest constraint. Astronomers are even now doing searches for Planet X and even for brown dwarfs out in the Oort cloud, and have not yet concluded that nothing is there. This shows that current technology can't with certainty even detect the gravitational effects of a Sun-like star at lightyear distances. There are certainly not large gravitation effects (other than the discounted Oort cloud disruptions) from a sun-like start 1 light year away.

OTOH, Venus peaks out at -4.9 magnitudes while Alpha Centauri i at -0.3. So Alpha could get 4.6 magnitudes brighter before it was brighter than Venus. 5 magnitudes is a factor of 100 (a difference of one magnitude is a change in brightness of the fifth root of 100), so if Alpha got about 73 times brighter it would be as bright a Venus. 73 times brighter is 8.5 (the square root of 73) times closer, which is about a half a light-year distant instead of its current 4.3 ly.

I very much doubt that having twelve of them would be significantly different than having one -- though the sky would be pretty spectacular!

Note that the planets in our solar system have stable orbits despite being 4.37 light years or 1.339 parsecs, from the nearest star system, Alpha Centauri. So it is obvious that 4.37 light years or 1.339 parsecs is larger than the minimum separation between stars necessary for planets orbiting those stars to have stable orbits.

There are many double and multiple star systems in which two or more stars orbit each other. And if two stars in a binary system are far enough apart they can both have planets orbiting in stable orbits around them.

A planet of Alpha Centarui B, Alpha Centauri Bc, was announced in 2013. If it is real it orbits at a distance of about 0.10 AU and a year about 12 Earth days long. It is closer to Alpha Centauri B than the habitable zone and probably has lakes of molten lava.

This indicates that two stars can get as close as 11.2 AU without disrupting the orbits of their closest planets, though obviously planets orbiting at the distance of Saturn or farther out would have their orbits disrupted.

In non circumbinary planets, if a planet's distance to its primary exceeds about one fifth of the closest approach of the other star, orbital stability is not guaranteed.[5]

This implies that if a planet's orbital distance is less than about one fifth of the closest approach of the other star, its orbital stability should be or might be guaranteed.

So if Earth was part of a binary star, and the nearest approach of the other star to the Sun was farther than about 5 AU, the orbit of the Earth would remain stable and almost unchanged.

However, these observations and calculations are for planets orbiting stars in binary systems where the two stars have elliptical orbits around their common center of gravity and thus travel at the correct orbital velocities.

Two stars separately orbiting the center of the galaxy that happen to pass close to each might have significantly greater relative velocities. And that might mean that they would have to pass at distances many times as great as 5 AU to avoid disrupting the orbits of planets in their habitable zones.

Anyway, such close passes would certainly disrupt the orbits of small bodies in the outer solar systems of the two stars which might result in multiple extinction events caused by asteroid and comet impacts on any habitable planets.

Not difficult at all. 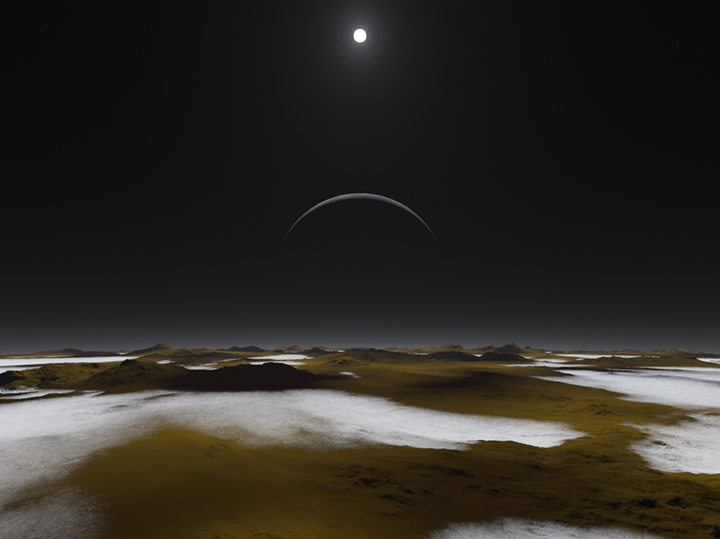 If you go out a few light weeks away (1 light week is ~ 1200 AU) you can easily have a Sun-like star appear as bright as Venus.

As gravitational effects go - the force of gravity is inverse of the square of the distance, so it's fades very quickly. Sun's gravitational pull at 1 AU (the average Sun-Earth distance) is tiny portion of Earth's gravity ( https://van.physics.illinois.edu/qa/listing.php?id=184 ) but obviously that's enough to keep Earth orbiting around it. Stealing of planets could still happen, but if it does, it will at galactic speed - over hundreds of millions of years. We'll still be able to detect it - we use the gravitational effects to detect exoplanets hundreds of light years away, but it won't have any practical effects on our planet.

This all assumes that the neighboring star is similar to the Sun. However, the Sun is bigger than your average star, it's G2V star, so you can easily postulate that the other star is smaller, less luminous star.

So in short - a few light weeks will probably be enough to keep the visible effects to a minimum.

As for having a cluster of such solar systems close by - also not a problem. The Solar system is in a region of the Milky Way known as the Orion arm, which is not very dense - the solar systems are on average 3 - 4 light years away. If we were in the galactic center, we would have a lot other solar systems that are a lot closer to us. If you want a bunch of neighbors that are close, just place the Solar system in a denser part of the galaxy.

Two stars may be gravitationally bound, or not.

If bound, they may remain a binary system for billions of years, and orbits of all planets and comets will get adjusted to having two heavy bodies in the system.

If not bound, the stars are going to pass away from each other in a few tens of thousand years. While passing, they will definitely disturb each other's Oort's clouds, sending number of comets into the inner systems. Possibly, planet's orbits will also be disturbed, and some asteroids will be set on collision course with inhabited planets - but this will likely take longer time (100,000s, maybe millions years) to play out, so doomsday will come long after stars had passed each other.

As far as the distance go, Sun-like star needs to be about 0.4 light years away to look as bright as Venus (calculator). For a smaller K-type star, distance can be shorter, like 0.2 light years. This is probably enough for the stars to be gravitationally bound, forming a stable binary system.

8
Distance between star systems
4
How close could we be to a stealth planetarysystem?

14
Are trojan planets possible? Are habitable trojan planets possible?
6
How far out can a pre-telescope human society (naked eye observations only) detect planets?
30
Can a planet have a day that's always longer than night?
6
Effects of a close approach with a non-pulsar neutron star?
20
What would the consequences be of a high number of solar systems being within close proximity to one another?
6
What does a gas giant close to a red dwarf look like?
6
How close to themselves could be two planets orbits?