So, I have many of the infamous spider-mechs (such as in this question) roaming about in my highly futuristic setting.
My mechs are arguably huge: the main body is 7 meters tall, in a conical shape, the base facing up and the pointy end down.

A main set of 8 long legs keeps it hovering 2 to 3 meters above ground; those legs are mainly used for walking around and surpass obstacles. Another set of smaller legs is towards the point of the cone, and is used for precision movements or for object manipulation. Those mechs are powered by an internal electric motor, and the power source are my top-notch sci-fi batteries.

The whole thing weighs around 60 to 100 tons, depending on the model and the supplies carried.

Thus said, I need a plausible way to lift those spidermechs upwards.

Those mechs are used to transport material around in my gigantic, multi- layered world.

Given those needs, I'm currently thinking of employing sets of rails. Given 4 rails pointed upwards in a supporting structure, the mech could line up its legs in slots (2 legs per rail) and be carried up, either lifted from above by a far reaching crane (or a set of) or pushed upwards by something else.

I'm considering a way to use magnetism to push the robots upwards, in a similar way we have magnetic levitation trains today, but I don't know if it would be feasible for the upward movement (as far as I get it, the mechs shouldn't be pushed away from the rains, like maglev trains are, but on the rails from below).

Often the simplest answer is the best, given this I would suggest that perhaps the best solution is merely the good old fashioned "Platform connected to steel (or other fictional strong metal) cable". As you can see here crane's exist able to lift fourteen of your largest spider-mechs. even for our civilisation https://fieldlens.com/blog/building-better/biggest-cranes/ this isn't a feat that requires any overcomplicated system, just a big ass crane.

Keep in mind that in my setting there is no limit to the resources or to the scale of buildings. Everything can be as big and expensive as needed.

Meaning that building hundreds of 100+kg lifting capacity, 300+ metre tall cranes shouldn't at all be a problem.

For bonus points mount these cranes on a specialised spider-mech chassis, this would probably help with army logistics and would enable the cranes to move around and provide support wherever they are needed, such as where another crane has been destroyed.

They are spidermechs. Do it like spiders. Of the three methods spiders use I think these things might be too heavy for hauling up on a web, and probably to heavy to climb without damaging the substrate.

Your mechs would need to prepare to jump for a few minutes, storing energy in springs (or pneumatic reservoirs?). Then they would shoot up into the air, spider style.

If you think 300 meters is too high for a single jump, have staging platforms along the way. Sort of like a cat castle. But a giant jumping spidermech castle.

Maybe some of you are unfamiliar with cat castles. Here I have taken a cat castle and populated it with lemon juicer spider mechs. They only need to jump a few times their own height. 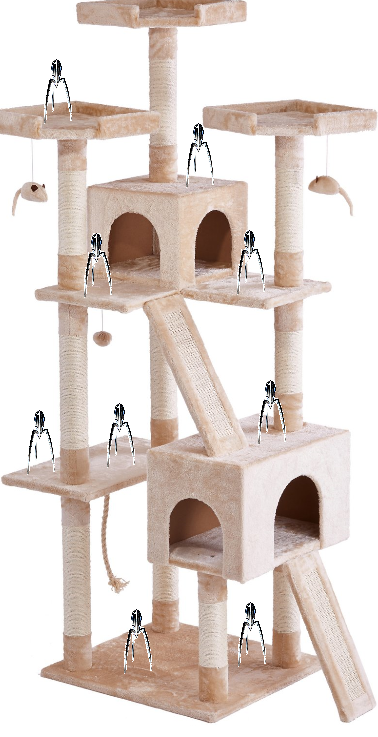 This method leverages existing technology without requiring research into railroad construction, cable rigging, funicular gearing, etc. The only new requirement is unprecedented capital investment, which you would probably need with any lifting method anyway.

As Ummdustry indicates in his answer, an additional bonus of this method is that the lifting mechanisms are naturally relocatable and self-propelled.

Let it lift itself.

Build "stairs", just reinforced area's the Mech can anchor its feet in, that allow the Mechs to climb upwards.

The other option would be ummdustries crane answer with a bunch of attachments on top of the Mech that allow a crane to lift it, or you just pre-attach these cranes to a platform that the Mech walks on top and use this thing that elevates them... An Elevator I'll call it. Even better, you can use the Mech's own engine to power the elevator.

Why not a ladder?

The main legs have a retractable hook which allows them to hook to the rungs so they can climb up and down as needed.

It's simple and easy to bolt to the side of the building during construction.

Not the answer you're looking for? Browse other questions tagged science-fiction transportation mechs .

49
Advantages of "Spider Mechs" over Tanks?

4
What pockets should Spider-man use?
5
Viability of a robot/mecha body with jumping-stilt/Cheetah-blade-like legs?
4
Powertrain for mid-19th century mecha
5
Speed of a Spider Tank?
4
How does gigantic spider scale tall buildings?
4
How to keep my bipedal mech from falling over on its side every time it takes a step
4
Rail Transportation with Races Described Below - Specifically, Seating
6
How do I make my soldiers jump higher