I’m writing a steampunk/weird west story set in 1867 and I want to incorporate some form of armored battle “walkers” (aka mechs). Looking for ideas for powertrains that could conceivably run such a vehicle.

I’m okay with being somewhat anachronistic, although I think something like a diesel engine might be too much.

Steam is the obvious answer for the setting, but I’d like to go a little deeper in explaining the tech than “it’s a steam-powered mech.” Curious about specific examples of steam engines that would be suitable for such a platform, or alternative power sources (internal-combustion? clockworks? hybrid-electrical?).

This is a pulpy story so it doesn’t have to be too realistic, but I’d rather not have someone with basic engineering knowledge (which I don’t have) throw the book across the room in a fit of disgust.

The vehicles I’m envisioning are designed to replace horses in cavalry regiments, so they can’t be too plodding. They’d be used for scouting and shock attacks. Agile and fast would be ideal.

Would love to hear your thoughts!

A steam tractor might not be a bad solution to your query.

Though I'd forget about walking. That kind of tech is something we haven't even really perfected by the 21st century! At that time, a wheeled mecha shouldn't be too difficult to work on.

A steam tractor is basically built like a tank, and is almost the size of a tank. Just put some armor on it and a couple gatling gun turrets and you'll have a wonderful and terrible land ironclad to send into battle! 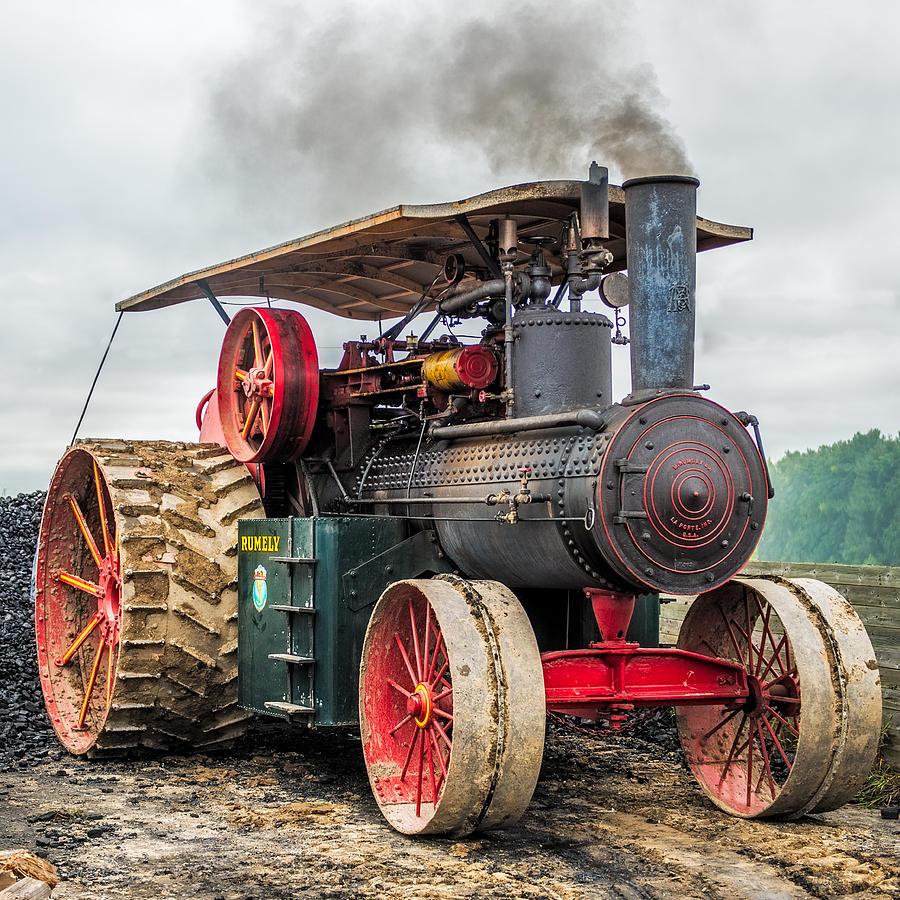 They aren't really built for speed, but are pretty powerful. For your armies, such vehicles could be adapted for a little more speed, after all, steam locomotives were pulling trains in excess of 60mph a couple decades before.

Main drawback in the design is their horrific steering mechanism. That's something your engineers will work on!

Another possibility, with considerable suspension of disbelief, is the marriage of steam power with the walking truck.

The walking truck was developped in the mid 20th century, and as you can see is quite wobbly and difficult to manoeuvre. Nevertheless, a couple steam stacks and a few gatling gun turrets and you're on your way! 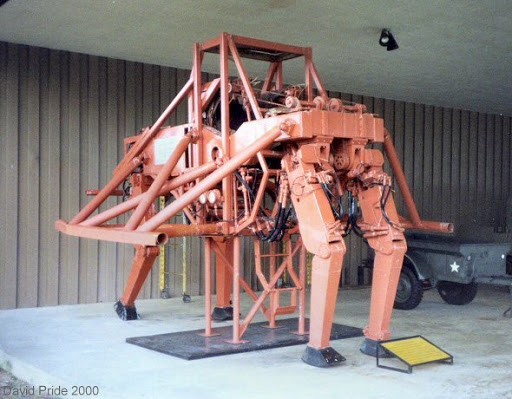 If you want to walk, have a human do the walking. Then augment him. 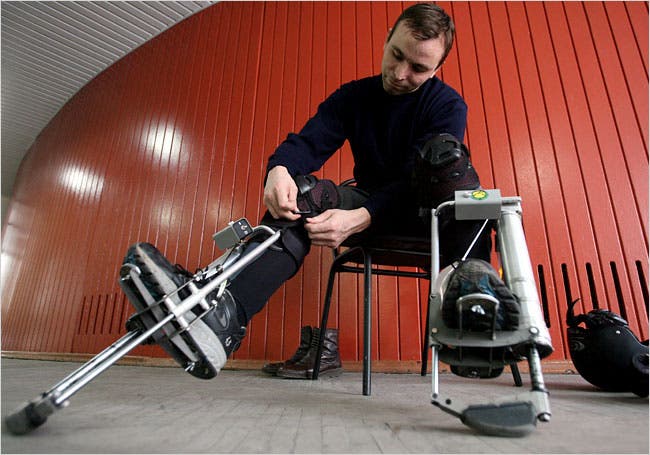 The dream Mr. Gordeyev conceived in 1974 to run faster and jump higher without getting tired might never have become a popular option for commuters or even caught on as a sport. But unlike the Segway, the American-invented self-balancing scooter, it never had a chance.

Instead, the boots became a military secret, as generals envisioned soldiers running swiftly and effortlessly alongside armored vehicles.

Rocket boots are already a little bit like stilts. Your mech suits have rocket boots with longer legs and a longer stride.

Liquid nitroglycerin was widely banned elsewhere, as well, and these legal restrictions led to Alfred Nobel and his company's developing dynamite in 1867. This was made by mixing nitroglycerin with diatomaceous earth...

The inventor Nobel teams up with your mechsmiths to make rocket boot stilts powered by tiny pieces of dynamite. It helps that nitroglycerine is a contact explosive. The downstroke of the stilt piston leads to a mighty upstroke, propelling the leg up. An automatic feed mechanisms feeds Nobel chips to the piston in a rate proportional to the stride. One piston at a time for a run, and a double chip in both pistons at once for a mighty trench-clearing jump.

Your armored infantry in the dynamite boots are tireless and faster than horses, although they are not going to sneak up on anyone. Their true forte is hand to hand combat. It is not just boots - the upper body armor also has dynamite-boot powered pistons augmenting the arms and armored gloves with brass knuckles braced to the arm; they can punch a hole through a stone wall then pick up a cannon and throw it.

This has become more power armor than steam mecha but I really love the dynamite power angle for 1867 technological wonders. And to my knowledge, dynamite powered bionic iron knights have never been done!

For reduced weights, you may get around handwaving precision mechanics and the use of alcohol burning inside high speed gas mini-turbines.

Steam turbines were invented 1880-ies, big, bulky and powerful - gas turbines have a much early history - 1629 as the first industrial applications the handwaving only requires the miniaturisation and serious step-down transmission to pay for reduced weight and power in the kW range (1HP = 745W).

An example of a school project axial turbine - the end shows the "death" of the turbine due to meltdown of bearing supports (i.e it didn't explode even if the housing was made from food tin cans)

I came up with a solution to this for a tabletop RPG homebrew some years ago.

Quite simply, the mech's limbs used hydraulic actuators as muscles, and its power source provided torque to a hydraulic pump.

The power source varied. Some mecha used a diesel radial engine to drive the hydraulic pump (a radial engine is wide and flat, and leaves more room in the torso for the cockpit). However, endurance was limited to around a day of activity before they had to be refueled.

I also came up with a couple of atomic power sources that relied upon the magical nature of my world. They would provide years of endurance, but were considerably more expensive than a radial engine and a supply of diesel fuel that would last an equivalent duration.

One was Tremium, a hard, brittle greenish metallic element. When it fissioned, it would release some heat, and a burst of kinetic energy in a random direction, unless there was a sufficiently powerful magnetic field nearby, in which case, the kinetic burst would be directed along the magnetic lines of force. The kinetic burst also increased the liklihood of neighbouring Tremium atoms to fission. By putting Tremium and magnets around the edge of a stack of flywheels, and arranging a governor mechanism to control the gap between flywheels proportional to the speed of the flywheel stack, a self-regulating reaction could be sustained, and controlled by altering the governor setting. In the event of governor failure due to battle damage, the flywheel "pancakes" could collapse together, resulting in a runaway reaction that might either melt down the reactor, or result in the flywheels exploding due to a purely mechanical failure of their structure, or heat demagnetisation of the permanent magnets next to the Tremium on the flywheel rim leading to chaotic, rather than directed, energy release. Despite its more favourable properties as a kinetic power source, Tremium was particularly hazardous to human health if not stored properly. If Tremium dust was inhaled, its spontaneous decay would slowly but surely tear apart its victim's lungs... and the brittle nature of both it and its ore meant that chaotic decay was highly likely to cause fractures and release dust. It was commonly stored in either magnetized containers in small quantities, or in wax-filled containers.

The other atomic power source was an element called Fulminium, an orange crystalline substance with semiconductive and piezoelectric properties. When it decayed, it would emit some heat, light in the orange and ultraviolet frequency ranges, and electrons, and by compressing the crystals between conductive plates of dissimilar metals, a direct electrical current could be tapped. Fulminium was stimulated to decay by ultraviolet light. A reaction could be regulated by placing a crystal in a chamber with reflective walls and movable black shutters; by controlling the shutters, the reaction could be controlled. In mecha, that electrical current could be used to power electric motors, which would drive the hydraulic pump. Fulminium was a somewhat more risky substance to use, as its decay products were opaque, and as a reactor crystal aged, it became increasingly more likely that the impurities would absorb some of the light energy and convert it into heat, to the point where the crystal would explode. This led to fairly frequent reprocessing of Fulminium reactor crystals to extract the impurities. It was considerably safer to mine Fulminium ore than Tremium ore, though occasionally electrical charges would build up to the point where they would emit bolts of lightning, unless the ore vein was grounded.

Steam, the actual actutators moving the limbs are steam cylinders. I'd go for a closed system that does not constantly loose steam/water (so unlike contemporary locomotives). This means you need large radiators as condensors, and sumps equipped with small pumps at the lowest points.

For a control system I imagine one operator per limb fiddling with many large levers to operate steam flow, plus one "conductor" who oversees the whole.

The first fuel cell came in 1838, and fuel cell technology doesn't really require much in the way of supporting tech - those early fuel cells were conceptually almost identical to modern phosphoric acid fuel cells. The only hand-wavium you really need for your story is an efficient catalyst and some improvement in electrode life. These fuel cells also generated a lot of heat and steam, so they'll fit your steampunk vibe just fine.

DC electric motors date to the same era (1827) and require no hand-wavium at all - by 1837 electric machine tools and printing presses were designed (they failed to catch on for the lack of a power grid to supply them.)

Maybe the walkers have a flywheel which rotates very fast and, through some fancy shiny gearbox, delivers energy to the walking mechanism. It could probably not last for longer missions (in a believable way) and it would need to "refuel" at a big steam powered recharging station which would take a minute to spin up the wheel back to its operational "ludicrous speed".

Not the answer you're looking for? Browse other questions tagged science-based technology science-fiction engineering mechs or ask your own question.

8
Could a 19th century setting support horse-propelled non-steampunk tanks?
38
Encryption in the 19th century
14
Mecha exoskeletons for livestock
16
19th Century army standing against a Modern Army
5
Viability of a robot/mecha body with jumping-stilt/Cheetah-blade-like legs?
14
Could solar power be utilized and substitute coal in the 19th century?
4
A Mecha, made out synthetic muscles, and advanced materials
20
Does adamantium solve the giant mecha problem?