I have a bit of a problem. My largest dragons have a flight range of over 1000 miles, but I have another continent that is only reachable by ship significantly closer (just over 750 miles). I can't use some excuse about winds, as my ships are mostly sail powered.

Further hampering my progress is the fact that my dragons originated on this other continent, as did humans. I need some way my dragons flew off the continent, but can't get back, that also makes it possible for ships to go back and forth.

NO MAGIC MAY BE USED.This is because my only magic is the dragons themselves.

Part of the sea near the far continent has something that causes the magnetic pull of the earth to behave erratically. Or add in some sort of electro-magnetic disruption that messes with their heads in a way that doesn't affect humans (much). It is situated so that it is impossible to go around it without adding at least 500 miles to the voyage.

This poses no problem for ships as they can use the stars to navigate well enough until their compasses work again.

But the dragons can't function there. They avoid it instinctively. Any dragon who gets close feels so uncomfortable (or even in pain) that they turn around and get the hell out.

This problem did not exist when the dragons lived on the far away continent and began after they migrated (or perhaps it spurred the migration). Imagine, for example, an astroid hitting the ocean and continuing to mess with local magnetism.

The wind isn't such a bad excuse.

Say there is a prevailing headwind, which for most of the path is faster than the average speed of the dragon. Dragons can fly one way but not the other.

Your ships, however, have a keel and triangular sails. These two inventions together permit a ship to sail upwind, tacking back and forth. This revolutionized the maritime world when we figured it out! As long as we can make sails strong enough to withstand whatever speed wind is sufficient top stop the dragons, we're set! 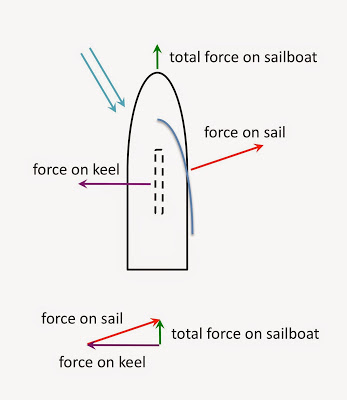 The only loophole I can think of is a dragon building a ship with a keel and sailing upwind. However, this becomes a different question: how does this fictional plot device you need tell the difference between a human crewed ship and a dragon crewed ship!

Your dragons can fly 1000 miles but they cannot see 1000 miles. Nothing can. On the ground you can see 10-15 miles. In a plane maybe you can see 150-200 miles. If a dragon sets out over water and it sees only water in front of it, it will turn around before it loses sight of the land behind it. A flying dragon wants to always have some land within view because it knows that if it gets tired and has to come down over water it will drown.

Your dragons originally came over because

1: Sea levels were lower and there were islands along the way.

2: It was an ice age and floating icebergs count as land.

3: The dragons of old were not as big of wusses as modern dragons, and were willing to fly over open water without lips quivering in fear. They drowned a lot too but that is part of not being a wuss.

Your dragons fly at high altitude, and the jet streams are found only there. The jet streams eased their spreading out of the continent, but now travelling against them is too much effort for the dragons, thus they cannot go back.

The ships instead, dealing with surface winds, have not such limitations.

The home continent has been struck by a species of fungus or bacteria that is highly lethal to dragons.

It can't survive in the ecology of the other continent, but any dragons that get too close to the home continent, or the waters around it, become struck by the spores of this disease and get sick.

The dragons have a flight range of 1000 miles--but can they do that in a single hop?

There used to be an island between the two that the dragons could stop and rest at. One day the island went Krakatoa.

It is possible that the dragons have simply been away from the continent for so long that evolution has made it impossible to go back. On earth, many island-dwelling bird species have this same issue, where their ancestors came over to the island from the mainland and adapted to the new climate, but in the process deviated so much from the original species that later generations were no longer compatible with the original environment. This could easily be done in your story by specifying a difference in the climates of the two continents. Considering dragons are reptiles (sort of), your best bet would be with temperature or humidity, both of which mess with a reptile's ability to regulate its body heat. So, with this method, the vast majority of dragons would be unable to go back to their continent of origin, but there would still be individuals that may have a better tolerance for the old environment than the others, which could lead to some interesting plot developments.

At 750 miles away, the continent is beyond the point of no-return for the dragons.

If the flying range of dragons is 1000 miles, as they approach the 500-mile mark they either have to head back or risk drowning in the sea.

Note that at the said 500-mile mark there's nothing to be seen anywhere. It's just water, water all round for at least 250 miles in every direction. At this point, the dragon already has lost sight of his homeland and is nervous. Near the 500'th mile, the panic starts to be overwhelming, doubts cloud the dragons mind (what if these pesky humans lied and the land is actually farther)?

Do not underestimate the overwhelming nature of this primal fear. To overcome this obstacle, a dragon must either:

Any one of these traits would tell very interesting things about the dragon(s) that might have actually crossed the vast sea from the continent in the ancient times.

Dragons glide, they can't fly on their own power. As long as they can find warm, upwards air currents they can stay up. But on the ocean? Eventually they fall and become kraken food.

That, or use a f... Maelstrom of air that ships can go around. Make it natural and non-magical. The way around the permanent storm is longer than a thousand miles.

It's really about the energy density of the food they are able to carry in their stomachs. On Dragon Homeland Island, there are many rich foodstuffs which can satiate them for a 1000 mile journey.

But on the continent, the available foods are full of roughage and fiber that takes space in their stomachs without providing any useful energy. Eating or carrying more just runs them into the rocket problem. They simply cannot fill their stomachs with enough calories to fly more than about 500 miles.

And they can't fish.

It's similar to how British Airways's most deluxe service can fly nonstop from NYC to convenient London City Airport, but can't depart London City with enough fuel to make it to NYC.

The magic the Dragons possess creates earthquakes and/or other cataclysmic processes. That's the reason they migrated too, their growing population broke the earth capability to resist their magic flux leaving that continent "hypersensitive to magic" indefinitely. A single dragon coming back can start a chain reaction that would destroy the whole continent.

Dragons are magic. They fly by magic. They are not the source of magic - they reap it from the air. Eventually, they can deplete an area of magic, to the point where they can no longer fly. This continent is one such.

Or the magic died out through some other means, eg https://tvtropes.org/pmwiki/pmwiki.php/Main/ScienceDestroysMagic.

All dragons have sworn never to return, after the Homeland Wars that nearly drove them extinct fighting over the territory, that tore the land asunder in the sites of the worst battles. The survivors called an uneasy truce with one another, and one of the terms was an agreement that they could never again set foot on this place - and they all know that the dragon to break that agreement will singlehandedly end the uneasy, relative peace that exists between dragons - and it may not peaceful per se, but it's not what it was - but will also be personally slaughtered by every other dragon upon its return.

The dragons communicate with the smaller beings - or perhaps use magic? - on a regular basis to ensure that no dragons have been seen on this continent. All secretly long for their homeland, but most love it too much to be the one to break that truce.

(Plot hooks: "All except one..." or "But the humans who captured Skittish the Dragon have no such sentimentality..." or "But then a long-dormant egg hatched and a dragon who had no knowledge of the truce or the ways of Dragonkind was born there...")

If we don't want to rely on fear and sentimentality, the Great Dragon General-Mages may have also cast an eternal ward as the last of the dragons left, preventing the dragons from crossing. ("Until, after millentia, the spell began to weaken...")

Not the answer you're looking for? Browse other questions tagged geography dragons travel or ask your own question.

14
Unsettled continent
18
Tactical Advantages to Dragons with Riders
119
How can a Dragon keep humanity in check?
7
How can my dragons use their tongues to control their fire breathing?
12
Pre industrial form of rapid mass transit over land
6
Why don’t dragons fly low?
5
How big is a dragon's hunting territory?
10
How could dragon society avoid interacting with humanity?