Why would sorcery require the use of both sexes to be performed?

Sorcery is a field of study that calls upon the magic of the planet. Rather than using their own natural energies which are finite, an individual uses the energy of nature and the world around them. This form of magic is unlimited and never runs out. The user doesn't control the magic directly as it is too massive and powerful, but rather guides it in a particular way as it flows through them. A person opens themselves up to the flow of magic through rituals. This requires a combination of chanting, movement, and runes specific to the spell or culture of the participants.

These rituals can also require hours to months of preparation, as well as various materials and a period of ritual cleansing or fasting. Magic resulting from these rituals are not permanent, and last as long as the spell is being performed. An example would be a rain dance, or a spell altering a landscape for a particular amount of time. These rituals always take a particular form. Weaker spells can be performed by a group of up to eight witches. For stronger spells, more participants are needed and both genders are used. One warlock is needed for every group of eight witches that are added to the circle.

Why would rituals need to be set up in this way to work?

If the two main divinities in your magic order are based on the Sun (male) and Moon (female). This can dictate what gender of magic user is needed based on the time and/or season.

Such that, during the day a spell might only require a Male (sun) practitioner or if it is a spell based on the Moon goddess (or one of the lesser goddess in her pantheon) then it requires both because the Moon spell need to pass through the Sun god (visa-versa for a spell at night). This can also work with seasons as Winter (Moon) & Summer (Sun) have spells which are stronger or only require one practitioner while Fall & Spring (having aspects of both) require both practitioners. You could even have to cast a special spell to entice the Sun to sleep or to "warm" the Moon goddess to move through the seasons.

Another idea, is that "life" (or at least the act of making life with humans) requires both genders. So healing and other curative spells could require both genders for that reason.

The Earth is sexist.

It also requires a "minimum amount" of the Masculine in the Feminine. The amount of Masculine in women (they do have testosterone) isn't that much (this is actual biological fact), so they can't do very powerful spells.

Thus, a warlock "levels up" the Masculine and allows for powerful spells.

(It also means that witches can only function from puberty to menopause, and warlocks are most powerful at age 18 and taper off after that. EDIT: Thus, old witches and warlocks do the same thing grandparents do, which is to assist the young and act as repositories of knowledge.)

Hopefully I don't get too flogged for this...but, my answer is going to take a page out of Peterson's feminine/masculine - chaos/order analogy.

Specifically, nature is chaos. Trying to do a rain dance? You're flirting with hurricanes. It's not that females are the weaker sex in this case, it's that we need them, and lots of them to gain access to nature. It's their influence that allows for the control of nature itself. These women are powerful indeed.

But anytime one deals with influencing nature, things can quickly go out of control, simply because nature doesn't want to be controlled. Enter the masculine. He is the bumper rails on this bowling lane. But, keep in mind that (let's take this analogy further), it's the women throwing the ball, the women knocking the pins, and indeed, the women potentially overthrowing into the next lane.

Your male is there to guide the power and to keep it in check. It's the women causing the rainstorm, and the man stopping the hurricane. So, there's simply less need for men in this case because their role is less in the production of the magic. 1:8 happens to be the golden ratio that your culture has found that:

This scenario will implicate that less amounts of women can easily do magic, and more powerful magic, than the men. But, as in your case, in order to do the really powerful stuff, the two must work together. Neither can exist without the other.

Strictly speaking the basic difference between a male and a female is that females possess two X chromosomes when male get an X and an Y chromosome (this is at least true for human).

From what I understand, this is the way a magician bends the magic flow passing through his body that make him cast rain or altering landscape. So everything is based on the magic flow shape. Of course, witches and warlocks can influence the global shape of the flow, but they are not able to perform fine-tuning operations. Chromosomes can, unintentionally! In fact, in a much smaller scale, the magic flow pass inside each chromosome of the witch/warlock and this create some very fine differences between a male and a female magic. Complex spells are really difficult to archives as they need very fine shaping of the magic flow. The only way to do so is to disturb the female magic flow by adding a bit of male flow (more turbulent).

This image of chromosomes XX and XY shows that there is a real difference in their shape : 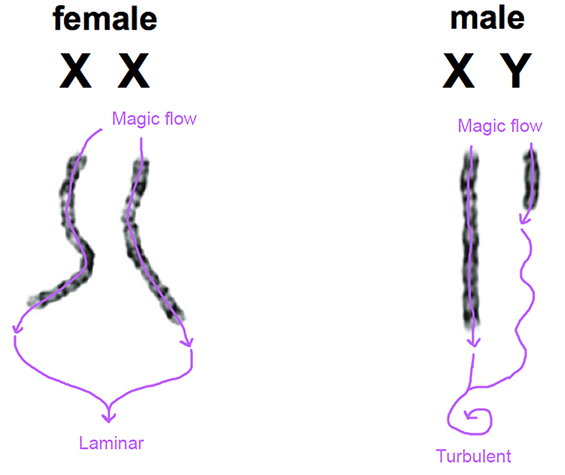 You can compare magic to a river. Witches and warlocks can change the riverbed but are not able to control the smalls vortex that you can sometime see in rivers (see below) which are proper to the way magic passes throught their chromosomes.

What is interesting with this theory is that people with down syndrome or other chromosomic condition will make another form of magic and will be needed to perform some more complexe rituals! 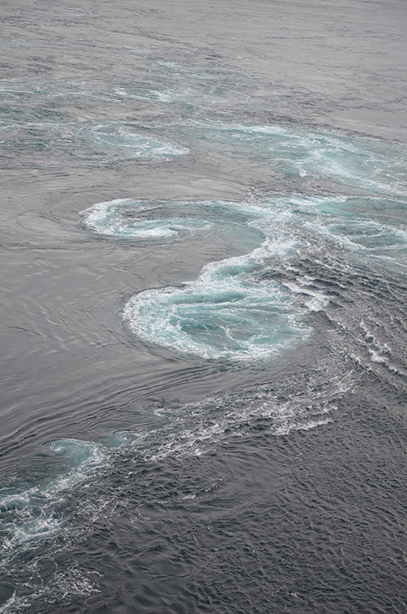 I would give the ratio numerical symbology and plant it in the ways your world is categorized.

For example, take the eight cardinal directions. North, North-East, East, South-East, South, South-West, West and North-West. Each witch would symbolize a direction, which in turn depicts an aspect of nature. Opposite directions would have major aspects that would balance each other out.

Let's say that East is the direction of birth, new things, sparks of fire, and Spring. I would give those aspects a "spirit" or "goddess" to personify them. It's opposing direction, West, would have opposing aspects, such as decay, embers, and Autumn. Its goddess would be diametrically different as well.

Now, the key concept is balance. You can have rituals for 2, 4, 6, and 8 witches before the magic is pulled in too many different directions. In comes the concept of the Axis. The warlock, and the associated god, is basically the focus of the many diverse magics. Basically where you stick the needle on the compass.

The compass was one example, but all you need is a group of concepts that oppose each other and one neutral monitor.

Not the answer you're looking for? Browse other questions tagged magic .

9
How could males be essential to a gender-specific magic system?
8
how can warlocks be prevented from taking over a coven?
7
How can I track the use of illegal magic?
4
How can witches combine their power without disrupting each other's magical field?
7
Why would witches be incapable of using wands?
2
how could a nature spell need to remain constantly active?