I have created a planetary system consisting of a Super Jupiter (10 Jupiter Masses) and up to 8 Earth Sized/mass Moons (on average) and now I wonder if it would be stable.

I already tried to create it in Universe Sandbox2, but US2's Game Speed drastically reduces if I would add so many bodies into one simulation, so I am not sure how long it would be stable. (I'm talking about a time span of several billion years.)

The next 3 are basically remains of a collision, so their mass is not impactfull to the systems integrity.

And finally, the two last objects are two super-earth-sized moons with 11 and 16 Earth Masses. Both of these have their own subsattelites.

Edit: The Gas Giant has an orbit of 3.7 AU to its sunlike star. 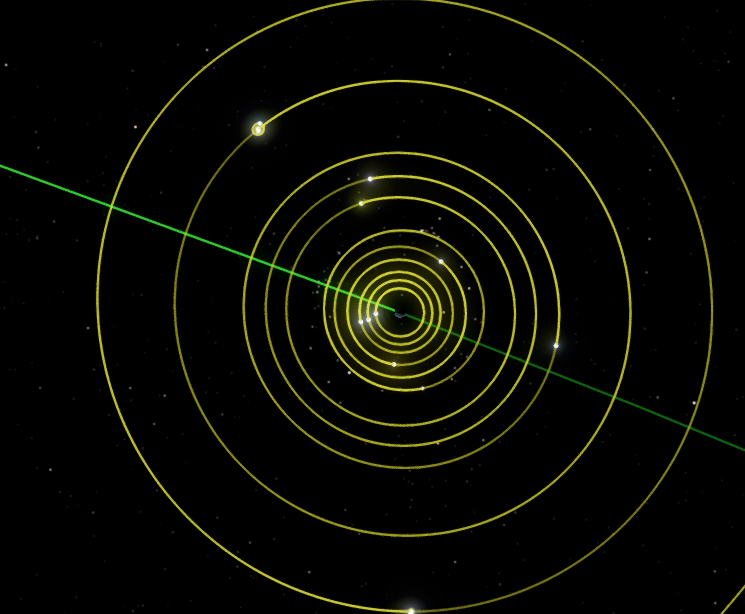 In terms of stability, there's no problem having a system of ~Earth-mass moons. The natural orbital spacing is logarithmic. Moons should be spaced either by a given number of mutual Hill radii (typically 10-20) or in orbital resonances (see https://wp.me/p3BSYQ-66). At 3.7 AU the planet's Hill radius is about half an AU in size, so the largest possible orbit is about 0.25 AU. If the innermost moon is at 0.01 AU, that is a dynamic range of 25 in orbital distance or 125 in orbital period. You could fit a system of 7 moons if each adjacent pair of moons is in 2:1 resonance (as for Jupiter's 3 inner Galilean moons), or 12 moons if adjacent pairs are in 3:2 resonance.

Not the answer you're looking for? Browse other questions tagged science-based alternate-worlds worldbuilding-process or ask your own question.

8
Exoplanetary Review: Rock Storms
22
Realistic sky of an Earth-like moon orbiting a gas giant (length of day and size of celestial bodies)
13
Are trojan planets possible? Are habitable trojan planets possible?
3
Could co-orbital planets also be double planets?
7
Is there a plausible way to have a Gas Giant with two or more earth to mars sized moons orbiting it in the Habitable zone?
5
What do I bear in mind, creating an earth-like world with TWO moons?
7
Concerning asteroids and a trojan habitable planet
5
Could this planet's tail be visible?