What material would ant-sized humans use to make armour?

In the world I'm creating, a branch of humans from prehistoric earth were castaway to another dimension by reality bending beings. The dimension exists as a large cavern filled with giant Earth arthropods and plants. Its strange laws of physics allow both organisms to survive with no negative side effects.

But the problem with the humans is that some of these creatures have an interest in killing them with their own natural weaponry. The humans proposed a way of surrounding their own bodies in a suit of armor for further survival. But the issue I'm running into is what material could they use as armor that is effectively durable, lightweight and protective against getting punctuated by stingers, claws, and mandibles?

A few materials I thought of were exoskeletons from other insects. Though the problem with an exoskeleton is that stinging species could easily penetrate through. As for the level of technology required for creating Aluminum or lightweight metal armour, that's it's own question, but what we need to know if tiny aluminum or any other metallic armour is possible to wear as viable armour.

Also for the details on the humans, they run, jump and carry as if they're on earth, so they can't lift many times their own bodyweight or run faster, but they can oddly stand on some of the arthropods without killing them, so they are light to the arthropods, but not to themselves. The environment also ACTS like the insects are their normal sizes, so it's the humans being protected by the negative square-cube effects.

Actually, your best bet will be portions of insect exoskeleton! When formed properly, it can offer its wearer a shell of protection. Sure, a sting might penetrate the armor plate, but if there is some padded space behind it, the sting may not even reach the wearer! Chitin could also be cut into scale armour and overlapped providing even more protection.

Also, any armour these tiny humans wear shouldn't be relied on for definitive protection in a melee battle against raging spiders or biting ants. It seems like they would probably lose such a battle anyway. At best, it will offer some protection against glancing blows.

The humans' best defense against the stings and mandibles of their enemies will still be their intelligence and their ability to adapt to new conditions in arranging their environment to their needs. 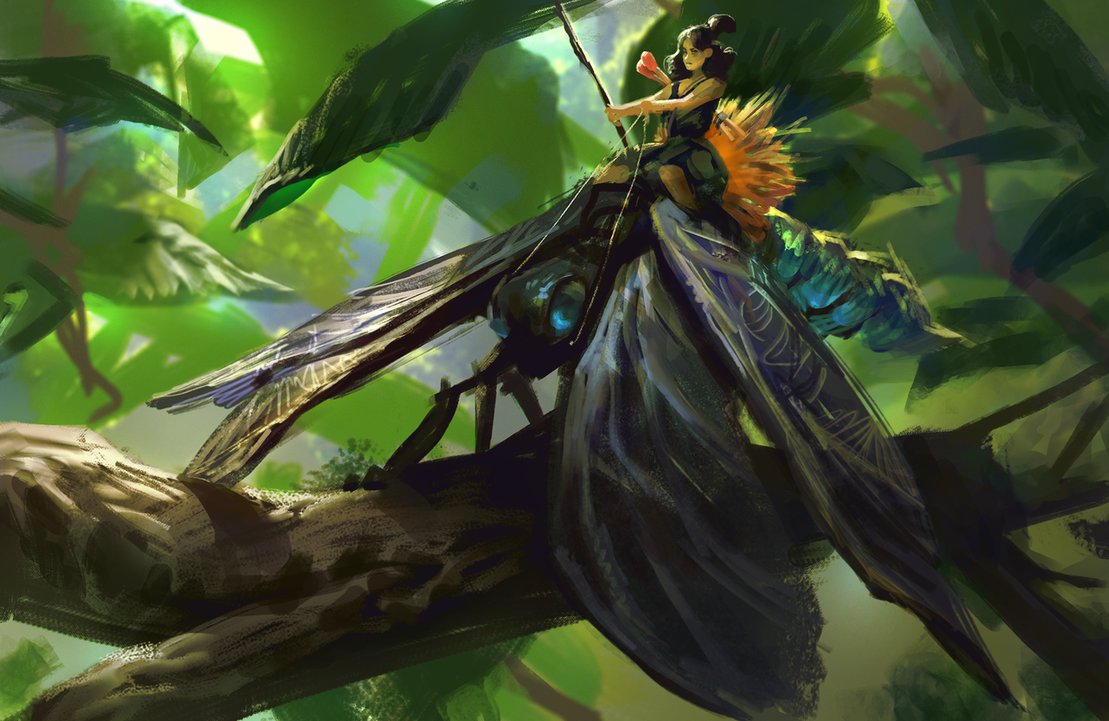 What mad addercop or army of valiant ant soldiers can withstand the intelligent human warriors bearing superior weapons and wielding advanced battle tactics? Humans on Earth outdid all their large animal competition the first time around. They'll just start over and do the same thing in this new environment: tame those insects that are useful, outcompete those that are both dangerous and untamable!

The same stuff we normal humans use, just less of it

Ant-sized humans are nowhere near the size of molecules, so bronze and steel are perfectly sound materials to use. What they'd use for leather and silk might be more interesting as those items are fiberous/woven and may not be shrinkable. But, then again, how much weight/comfort is necessary? Spider silk may be a direct replacement.

Tiny blacksmiths may be getting stepped on all the time. I think all the current metals are as available to ant-men as they are to us.

I think your main armor would not focus on strength of the material, but on deception.

Win the fight before it happens.

You could possible use glands and dyes to imitate toxic insects while wearing heavier and tougher armor, getting the best of both worlds.

The ant sized humans could domesticate spiders, and selectively breed them to obtain the highest quality silk used for weaving Armour.

I'm being totally serious. Some bugs do so and it is quite effective. Consider the golden tortoise beetle larvae:

Aside from being a bit overpriced, it’s hard to deny the effectiveness of a poo stick in warding off attackers. Which is exactly what the larvae of the tortoise beetles have been doing for millennia. Not content to just sit there and get eaten, using a highly elongated and mobile anus, they build a tower of poo on a special structure on their backs. It’s dextrous too: When threatened, the larvae can smack their foes with the so-called “fecal shield.”

According to National Geographic, the mere presence of the shield may discourage offenders:

I would never initiate melee combat with someone covered in poo either. I'd much rather fight someone wearing radioactive armor than to... Well, you get what I mean.

Antimony forms a highly useful alloy with lead, increasing its hardness and mechanical strength, is used in bullets, bullet tracers and as an opacifier in enamel; batteries and infrared detectors.

For toughness, energy efficiency and stealth Antimony is your first choice, ant man.

They pulverize/powder insect chitin (exoskeleton), and mix it with glue excreted by some other insect, and make customized armor. This could be body armor, or shields made to protect one or more people, or even sleeping quarters, and houses.

Not the answer you're looking for? Browse other questions tagged science-based insects .

43
Would armour made of spider silk work?

4
What material to use for a near-future armoured spaceship?
20
Would super-sized humans be super-intelligent?
4
Weapons out of grass and roots practical for tiny humans to hunt beetles?
8
How loud of a sound would a human-sized cicada produce?
1
What would be the best material and structure for LEGO bricks to built planet-sized statues of local planetary system leaders?
4
Would larger silkworms make silk cheaper?
18
Parasitoid wasp targeting humans: which tissue would they target?