How big can a nebula be?

How big could a nebula be? If a spaceship were traveling 300,000 times the speed of light (assuming this were possible and had no other effects, such as time travel or time dilation) is it plausible that it would take several hours to traverse a distance equivalent to the average width of a nebula?

Here's the gist of my answer, for simplicity:

Essentially, yes, you can have extremely large nebulae that would take a long time to cross, even at exceptionally high speeds.

If you look at some of the largest nebulae currently known, you might notice that many of them, measuring hundreds of light-years in diameter, are HII regions. They're are stellar cradles, clouds of hydrogen ionized by the young, newly-formed stars inside them. Their evolution is governed by the emission from the hottest massive stars that provide the ionizing radiation, and will eventually disperse the clouds entirely. HII regions are good choices for large nebulae simply because they're extremely massive, and may contain dozens of stars.

Many of the largest nebulae are HII regions:

HII regions aren't always the sites of starbirth; they can form (at smaller scales) around single stars. Barnard's Loop is a famous example of a large HII region that is thought to have formed from a supernova. However, the very largest HII regions are indeed these descendents of molecular clouds, containing clusters of young stars.

A popular model of a (spherical) HII region is the Strömgren sphere. A Strömgren sphere is a cloud of gas embedded in a larger cloud. The external gas is neutral beyond a distance called the Strömgren radius; inside the Strömgren radius, the light from one or more stars ionizes the hydrogen, forming an HII region. We can calculate the Strömgren radius $R_S$ via a simple formula: $$R_S=\left(\frac{3}{4\pi}\frac{Q_*}{\alpha n^2}\right)^{1/3}$$ where $n$ is electron number density, $\alpha$ is called the recombination coefficient, and $Q_*$ is the number of photons emitted by the star per unit time. We might see a number density of $n\sim10^7\text{ m}^{-3}$ inside the nebula, and at temperatures of $T\sim10^4\text{ K}$, $\alpha(T)\approx2.6\times10^{-19}$. All that remains is to calculate $Q_*$, which can be found by the formula $$Q_*=\int_{\nu_0}^{\infty}\frac{L_{\nu}}{h\nu}d\nu$$ where we integrate the Planck function, weighted by frequency and multiplied by the surface area of the star, over all frequencies greater than $\nu_0=3.288\times10^{15}\text{ Hz}$, the lowest frequency that can still ionize hydrogen. $L_{\nu}$ is a function of the star's effective temperature $T_{eff}$. If you want to instead use the star's mass as a parameter, we know that that $T\propto M^{4/7}$ works as an approximation for many stars (and $R\propto M^{3/7}$). I've found that it works poorly on low-mass ($<0.3M_{\odot}$) stars, but there, it deviates only by a factor of 2, depending on your choice of proportionality constant. 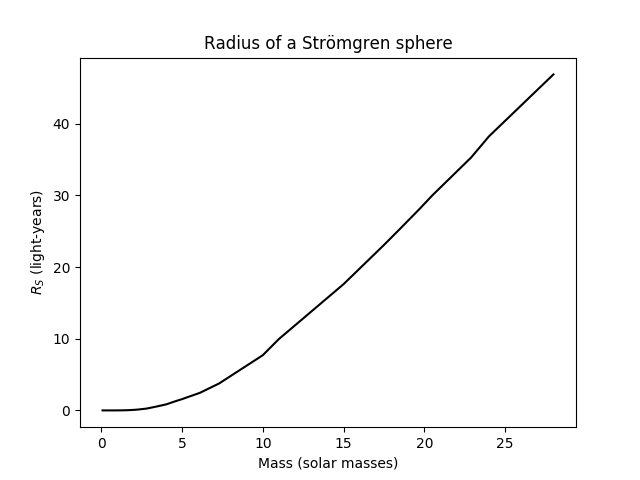 This indicates that even single, massive stars can still produce HII regions up to 100 light-years in diameter, which is quite impressive.

The above model assumes that there is only one star at the center of the sphere. However, most of the large HII regions I mentioned above have multiple stars - or even entire star clusters. Therefore, we need to figure out how large our HII region can be if we assume that it contains a cluster of hot, massive stars inside it. Adapting a model of Hunt & Hirashita 2018, let's say that the cluster is static - no stars are being born and no stars are dying. Additionally, assume that the cluster obeys some initial mass function $\phi(M)$ that describes how many stars are expected to have masses in a given range. We now have a more complicated expression for $Q$, the total number of ionizing photons emitted: $$Q=\int_0^{\infty}Q_*(M)\phi(M)dM$$ where we acknowledge that $Q_*$ is a function of stellar mass. This is still easily calculable for any cluster of $N$ stars, once you pick your IMF. We can then plug this values into our formula for $R_S$. The fact that $R_S\propto Q_*^{1/3}$ does mean that we need a large number of massive stars to reach diameters of $\sim1000$ light-years, but it's still quite possible.

With the exception of the Eagle Nebula, these are all within a factor of two from the accepted values. There are some things I could change that might increase the accuracy of my models:

Nevertheless, this is a start, and I invite you to play around with it a little.

One question still remains, however: How large can an HII region be? We've seen that star-forming regions of tens or hundreds of thousands of stars can ionize gas clouds hundreds of light-years across. Is there an upper limit to the number of stars produced in such a region, or even to the size of the star-forming region itself?

The Tarantula nebula is the largest known nebula at 200 parsecs (650 ly) across. 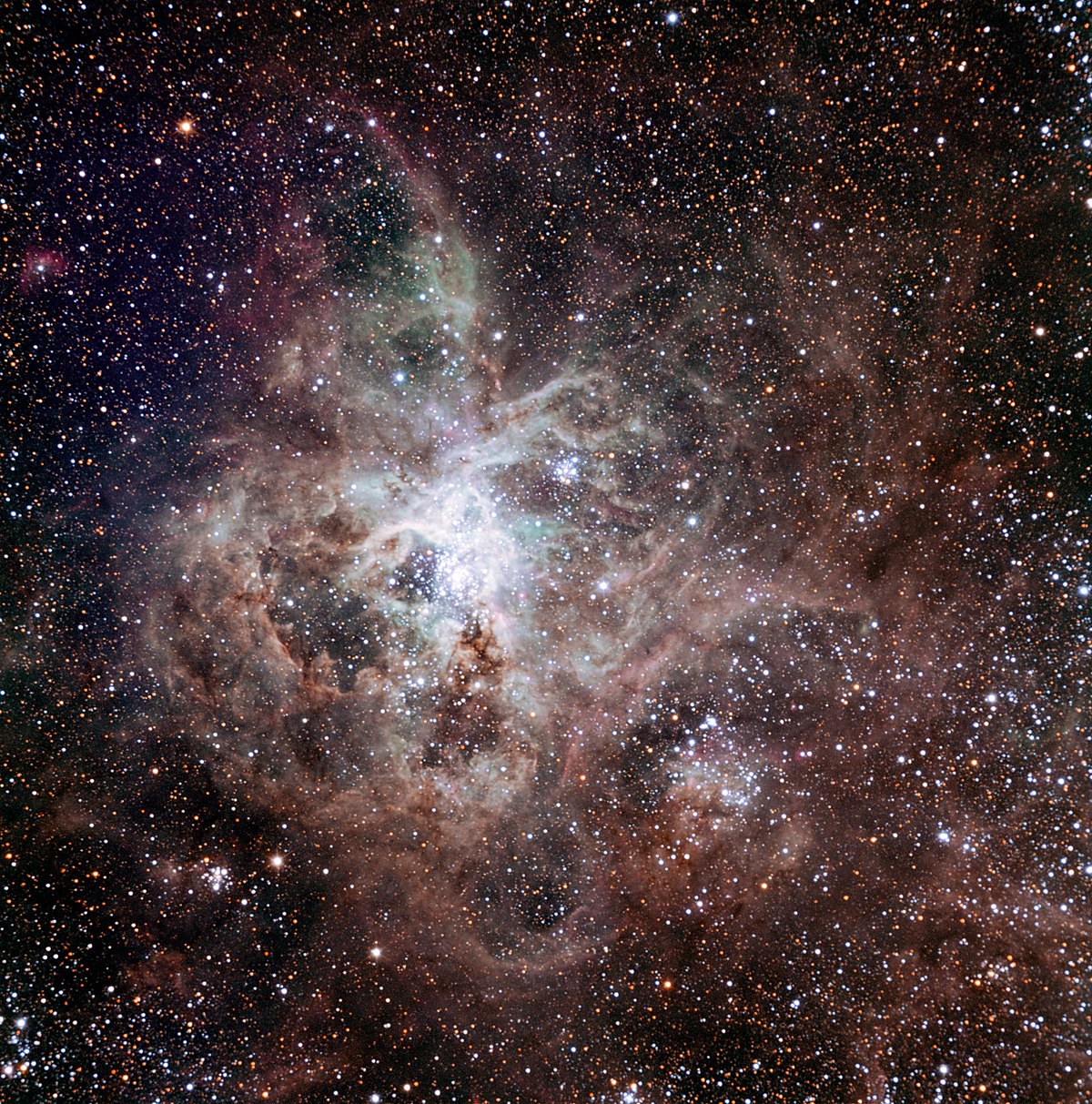 From another source, the Tarantula nebula's size is given at 40 arcminutes at 179 kly distance. I calculate that to be 2080 ly across. I suppose it depends on how you define the boundaries of the nebula. This would take 60 hours to cross at the given speed.

It's hard to say how large it conceivably could be since the definition of a "nebula" can be a bit... nebulous? Every galaxy has a very loose haze of particles around it and in principle what we call a "nebula" is just an unusually dense conglomeration of these particles. As such there's no strict upper-limit but anything sufficiently large will eventually be disturbed by nearby stars or other sources of gravity, causing them to either collapse or disperse; so they may exist but for shorter periods of time.

The largest named nebula is the Tarantula nebula at about a thousand light years across (NGC 604 in the Triangulum galaxy might be even larger, but this is a comparatively 'loose' collection of space dust). If you were travelling at 300,000 times light speed it would take 44 hours to cross, so a nebula even an eighth as wide (such as the image below of the Cygnus Loop) would still take several hours; easily fulfilling your criteria. 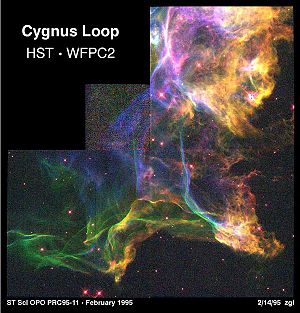 Not the answer you're looking for? Browse other questions tagged space space-travel nebula or ask your own question.

10
Can a spaceship traveling close to light speed be knocked off course by a gamma ray burst?
19
How big can a space empire get?
3
How can the human race survive the destruction of the inner solar system?
5
How would two generational ships traveling at point eight cee communicate with each other?
1
Could near light speed ship dilate time severely enough to explore other stars with out breaking the light speed barrier?
14
How can I know where to point my spaceship?
34
What does the view outside my ship traveling at light speed look like?
10
Intragalactic velocity past the central black hole