What weapon would be used by a civilization living 10 000m underwater?

I am creating a population of human fish that has created a city in an oceanic trench.

There are few things to know about this kind of people and the place where they live:

I have already thought about melee weapons but I want to know if at this depth, with enough budget on research we could make at least a working harpoon thrower. Even if there is no way that they could manually pull the string themselves, they could at least use it one time.

I don't want a weapon of mass destruction, but things that a single person can use.

And if there is a way to get a weapon like that, would it be usable outside water or at a lower pressure too?

Never bring a knife to a dart fight. 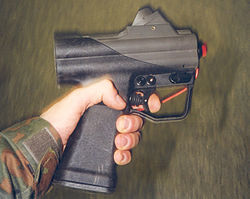 The HK P11 is a Heckler & Koch pistol designed as an underwater firearm that was developed in 1976. It has five barrels and each fires a 7.62 X 36mm dart electrically. Loading is by means of a five-round case. The design resembles that of a pepper-box firearm. 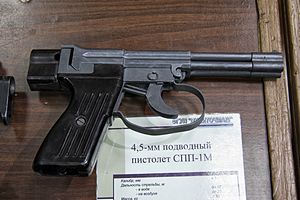 The SPP-1 underwater pistol was made in the Soviet Union for use underwater by Soviet frogmen as an underwater firearm. It was developed in the late 1960s and accepted for use in 1971. Underwater, ordinary-shaped bullets are inaccurate and very short-range. As a result, this pistol fires a round-based 4.5 millimeters (0.18 in) caliber steel dart about 115 millimeters (4.5 in) long, weighing 12.8 grams (0.45 oz), which has longer range and more penetrating power than speargun spears. The complete cartridge is 145 millimeters (5.7 in) long and weighs 17.5 grams (0.62 oz).

Follow the links in the guns' names for more info.

These weapons are from the cold war era. They had a rather short range (not effective over 20 meters underwater or 30 on air). With a bit more tech advancement, and the demand caused by your species living underwater, and your world could have versions with longer range.

Also, torpedoes to do the job of our world rocket and grenade launchers.

I would think harpoons would work perfectly well. Resistance to pressure does not translate to resistance to puncturing.

Otherwise, sonic weapons (weaponized lithotripters), or tasers (salt water is conducting, but copper wires are way more so, and most of the charge would be delivered on target).

For longer ranges, I think the only reasonable way to go is torpedoes, but given their speed, they wouldn't work very well as antipersonnel weapons. Possibly, explosive-tipped torpedoes could work, if they had some sort of proximity fuse.

I was wondering if standard firearms cartridges generated enough pressure to be practical to use to drive a speargun at that sort of depth. A bit of googling around gives barrel pressures in the 21Kpsi to 60Kpsi range, for different types (http://www.closefocusresearch.com/calculating-barrel-pressure-and-projectile-velocity-gun-systems) and a water pressure increase of a bit under 14.5psi per 10m depth, or a bit under 14.5Kpsi at 10Km. So that looks OK (but suggests that a slower burning gyrojet style projectile might have problems).

On the other hand, if you're using powdered propellant, at 10Km it's likely going to be crushed into a solid block unless you have enormously thick cartridge walls (and an equally thick projectile at the end). And presumably a firing pin isn't going to work unless you can trigger your primer by a shock wave through the cartridge wall (which is likely too thick to deform).

If you could get a solid propellant charge to work, then things get a lot easier; if there's no air space, you probably don't need the thick walls (as long as the pressure wouldn't trigger the primer).

A gun with supercavitating self-propelling rounds, something like a Gyrojet, the rounds would either be longer/heavier to have comparable penetrating power to a bullet and/or be tipped with explosives/poison/acid/etc.

Not the answer you're looking for? Browse other questions tagged weapons underwater or ask your own question.