Will the physics work for a dual star system such that the “life” planet will have 0, 1 and both stars in the sky periodically? [duplicate]

I am working on building a civilization that has a ingrained superstition about two body systems. My desire is to build a myth system that revolves around empty or 0 is bad, 1 is ideal, and 2 is troublesome, taken from the astronomical observations. I can do it using a lunar system, two moons where the primary moon has a visible secondary body at one of it's Lagrange points. If I understand what I have been reading about here this should be stable.

However, I want to take it one step further, and create a dual star system setup, using The Butterfly Pattern as the orbital system pattern. Do the dual stars make sense, and would the presence of two moons aggravate the system enough to be catastrophic in an approximate span of 500,000 - 1,000,000 cycles? (I am looking at this time span to be a possible evolutionary progression of the civilization) The population in question will be interstellar, and have deep religious trappings based on the cultural myths and superstitious paradigms.

(Edit:) This question started based on research into stable 3-body patterns from links in the figure-8 questions. However, the question is NOT whether a figure 8 works, but if there are physical models of orbits around two stars that give me all combinations of the stars in the perceived sky of the civilization's planet. Both answers have helped me and gave me a good place to keep working out the idea. I want to select both as an answer, since they both work off each other. 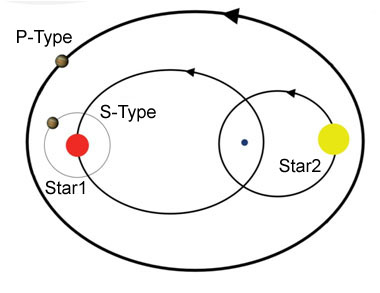 For most binary systems, habitable planets will have P-type or circumbinary obrits. That is, the planet will orbit both stars. This will generally be a little more boring than what you seem to be going for, both stars will be visible most of the day.

For a S-type orbit, the planet only orbits one of the stars, you'll get more interesting effects. It may not be all the common, but this type of orbit is possible and can be stable. In fact Alpha Centauri, our nearest neighbor, is a binary system where such a planet could exist.

As noted in other similar questions a planet switching orbits between the two stars is not at all likely.

The issue with something like the butterfly pattern is that it's been proposed as an orbital pattern for three equal sized bodies. With a planetary system, you're going to have two equal sized bodies and one which is significantly smaller than either.

That being said, it's definitely possible for a planet to exist in a solar system with two stars. Here are three possibilities for doing so:

This is what's known as a 'P-type' orbit. In this case, the stars orbit one another fairly tightly, and the planet orbits around their gravitational center. Since the orbit goes around both stars, they will both be visible unless one of the stars goes behind the other. This may not be favorable for the culture to develop the '0 is bad, 1 is good, 2 is troublesome' sort of a mythology that you want.

This is called an 'S-type' orbit. This would be the case of a widely orbiting binary star system, with the planet passing between the stars during its orbit. Assuming that the planet also revolves, this might make the most sense for your mythology. A single sun in the sky would be most beneficial to life, providing warmth and light to go about the day. Night would bring darkness and cold. Night would only come about when both suns were on the same side of the planet. Although the light of the suns would be hotter during this time, the total light on the planet would be less, so hot days would be interspersed with cold nights. The perceived notion could be that with two suns are close together in the sky, the night can arise, and only when they are balanced on opposite sides of the planet is there consistent warmth and light.

Lastly, the planet could sit at a L4 or L5 Lagrange point. It would see two sunrises every day, with a short night. It also might work with your mythology, since the two-sun portion of the day would be very hot. One sun in the sky would bring enough light and warmth for people to go about their lives, and night would bring darkness.

Not the answer you're looking for? Browse other questions tagged science-based culture astronomy or ask your own question.

30
Can a planet have a figure-8 type of orbit around two separate stars?