What evolutionary factors could evolve a species which looks like a hybrid between bunny and octopus?

I am creating a race of aliens that are amphibious and mammalian in detail, they have six tentacles, bunny ears and also fur covering their bodies. They are about 3-4 ft in length, if this species evolved naturally on a habitable planet, what evolutionary factors might make my species a real possibility? would it even be possible for a species to have amphibious and mammalian traits?

They build their homes by the seashore and prefer wet environments and they breathe oxygen. I'm not sure if it is possible to have them be able to breathe underwater too and still have all those traits. They should be able to use their tentacles for locomotion. I think their noses will probably be like two small holes or maybe something different could work?

This is bizarre enough to take a crack at.

In order to make this biologically plausible I'm going to explain this as a totally alien creature which is not a mammal, cephalopod or any other earthly creature, but happens to have some similar looking features.

The "bunny" head is because this creature evolved as a free swimming predator, so the eyes and mouth need to be in the "front". It swims after the prey with the tentacles flowing behind in the streamlined position (perhaps using a siphon or maybe pulsing the mantle in a manner similar to a jellyfish). 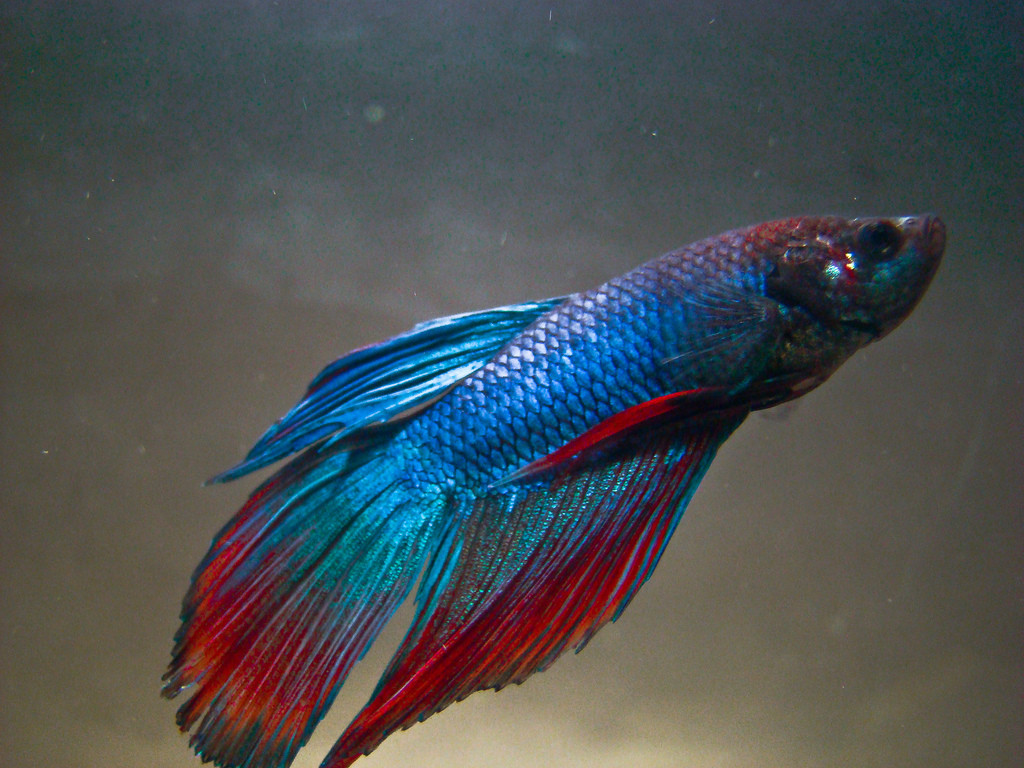 The "fur" isn't fur at all, but rather sensors. The creature could be using them to sense electrical fields, currents, chemicals in the water or whatever else is appropriate to the environment. Extensible "ears" allow the sensors to be able to orient and pinpoint the source of the emissions the hair like sensors are meant to find.

Once it becomes advantageous to move to a land based environment, the tentacles become more leg like the "squibbon" from the TV show "The Future is Wild" 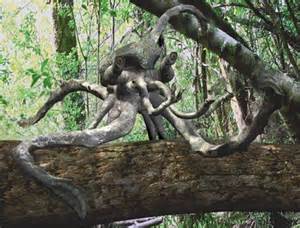 Other adaptations to become amphibious would include the ability to breath atmospheric air rather than using gill analogues, and adaptations to give birth or raise young outside of the water.

This is rather strange sounding creature. We are often able to look at a trait and identify what it is for (even if not able to identify how it evolved). Example: We can look at a cheetah and see how it's skeletal structure enables it to move so quickly.

I'm trying to imagine why a creature would have big floppy ears, tentacles, fur, and be so large. Consider the big ears. Animals with large ears often use them for thermoregulation (think elephants, rabbits, and the fennec fox). If the tentacles are for locomotion, how would it have evolved them and why? Hmmmmm... [Scratches head] And fur? The major sea mammals are the cetaceans (dolphins and whales). They've swapped their fur for blubber as insulation. Much more effective in the water.

Now. How realistic do you want this creature to be? The more plausible you want it , the more I would think that you would consider how it evolved. I can't really see any cephalopod developing ears and fur (and the physiology that accompanies those traits). As mammals however we (I'm assuming you're not a cephalopod) have shown that we are quite capable of adapting to many different environments. Endothermy! (Warm-bloodedness).

OK. So we've got some sort of aquatic mammal. If it lives right by the water I'm not sure why he's got bunny ears. He (or she) can keep cool with the water (If they can't keep cool with the water because it's too hot then they're probably already f*cked). I guess if they were to continue spending a significant amount of time outside of the water and it was really hot then it could be advantageous for your hexabunny (ew...) to maintain the trait of large ears. Large ear size would serve no advantage in the water as far as hearing goes but it could still be useful on land.

This brings me to the point that any organism is going to evolve to be best suited to their particular habitat. So you're also going to want to spend a lot of time thinking about their environment. So if the big ears are for thermoregulation then I'm thinking this hexabunny is spending a lot of time in the heat away from water. But it's also got tentacles so it's spent a hella lot of time in the water too... Hmmmm... Maybe it migrates?

Maybe your hexabunny was just a regular bunny that evolved to take advantage of the food source on the other side of the giant wetland (let's say its a huge wetland but not too deep). The bunny used to to traverse it only when it was dried out but a few hexabunnies were able to do so when it was slightly wet and were able to outcompete their hydrophobic counterparts. As the climate continues to change the wetland gets bigger and bigger and the hexabunny (not really a hexabunny yet.

Kinda lacking the six tentacles part right now. Six?) is able to continue adapting to the increasing amount of water. So this food must be really good. What is it? Not sure. But it's hella worth it apparently.

So now you've got an aquatic bunny. Why does it continue to deal with the heat on land? Ummm... Let's say that the seasons are really drastic and in summer where the hexabunny lives is really hot and dry. Now why does it have tentacles and how did it get so damn big? I'm imagining that a rabbit would evolve to use those super cool feet more like frog flippers. Really have no idea why a mammal would give up our super cool limbs for tentacles.

And the size... Why would it be advantageous to be so large? So as to not be eaten by predators perhaps? Maybe the water's actually really cold (at least where it swims. Maybe in the really deep cold currents?) and it is big because that means less heat loss (greater volume to surface area ratio. See the enotes website). But then why does it still have fur? I guess to help deal with the cold when outside of water.

So your hexabunny (which is actually just a big ass aquatic bunny right now) has to deal with some dry hot ass summers, some super cold deep sea diving and also cold on land (Maybe your bunny burned all its fat while swimming in the cold so that's why it keeps its fur). So this guys doing some serious migrating and dealing with some crazy seasonal changes. That's all I've got for now... Phew. Good luck!

I am not a biologist so my answer will not be accurate and make some sweeping generalizations, but I want to play mad scientist here and give you some ideas to ponder

A four legged animal with a spine that does not generate its own body heat, instead gaining it from the surrounding environment. This leads to a low metabolic rate. The young generally undergo metamorphosis from larva living in water with gills to an adult air-breathing form with lungs.

An animal with a spine that generates its own body heat, this leads to a high metabolic rate. It also possess a neocortex (a region of the brain), hair, three middle ear bones and mammary glands

a slender, flexible limb or appendage in an animal, especially around the mouth of an invertebrate, used for grasping or moving about, or bearing sense organs.

Probably not but as outlined in Ghotir's answer the Platypus exists so lets assume on an alien world that your Bunopus is the million to one shot and comes about. I think it would have to happen on a low gravity planet which would make the tentacle viable as an effective form of locomotion. Octopus do 'walk' on the sea floor (but aren't very good on land)

So the Bunopus needed a reason to come onto dry land. This could be because the water it lives in had low oxygen levels, or possibly went through periods where it dried up. This would lead to evolving lungs to come to the surface and breath, or survive during the periods of drought.

They will then need a reason to stay on land. A good food source, perhaps plants or smaller invertebrates. From my quick research I find that there shouldn't be any predators that will pick them off in this early stage. They will need to be at the top of the food chain.

Amphibians have primitive lungs that are rather inefficient, and so take in a lot of oxygen through their skin. To do this they must stay moist, so the fur could be a system used to trap moister and protect them from dying out. It might be fur as we know it, but elongated scales developing into a feather like covering. Maybe without the center spine but just the barbs resembling fur.

Given that a definition of amphibian is four legged (tetra-pod) I would say that four of the tentacles evolved for locomotion. The remaining two are sensory organs, identifying food; detecting electrical signals in the water; etc or feeders. This could come about from needing a way to catch faster prey, or by needing to lift the body higher to reach foliage on tall plants, and the remaining two from an advantage provided by what ever you choose from them.

I would imagine that the Bunopus' sight is quite bad, or non-existent. They would then need a form of threat or prey detection. This could lead to an audio sense, and over time develop the three-boned structure of the ear found in mammals. Over time these could become bigger and more sensitive providing a better survival/catch rate and making for healthier mates.

I think I have covered the basics of the traits you asked. I know I have left a lot out like why they would feed their young and develop mammary glands. Also I think I covered why having these traits would be useful but not how they came about from small genetic mutations. But hopefully this might point you in the direction you want to head and really get the mental juices flowing.

The real-world platypus is a "semiaquatic egg-laying mammal": it is absolutely possible for such a species to evolve.

There is even a helpful section on Evolution on that wikipedia page. It's not much, but it should help get the mental juices flowing...

Not the answer you're looking for? Browse other questions tagged internal-consistency xenobiology .

20
Anatomically Correct: 4-legged sapient creatures (“centaurs” etc.)
13
Possibility of bipedal mostly-aquatic species?
8
Are pharyngeal and cutaneous breathing possible for an aquatic mammal?
11
Symbiotic barnacles for underwater respiration
13
Can an insect evolve to look and function like a mammal?
4
Are retractable ears plausible?
8
If a hawk-person teaches a peacock-person to fly, what kinds of maneuvers will the peacock-person be capable of?