Portable nuclear reactor that can be brought to medieval age

A hero travels to another world that is like the medieval age of Earth.

He needs a portable power generator. Is there any portable, low maintenance, at least 10 MW, reactor or energy producer that can be brought to another world?

So the thing about nuclear reactors is that you don't leave them alone. The EPA and NRC kinda frown on that. If you want low maintenance, you're not going to want to use what we usually think of as a nuclear reactor. There's a reason they have specialists managing them.

Also, 10MW is not chump power. We might be able to make some toy reactor that produces a kw or two that doesn't need maintenance. Making a full sized reactor is harder.

There are Radioisotope thermoelectric generators (RTG) which just rely on the heat generated by the natural decay of a radioactive element rather than trying to make it go faster than that. A plutonium pile is very efficient, generating .54 watts/gram. It also happens to have a convenient half life for your hero (88 years).

If your hero brought in 5,400kg of Plutonium, and built a RTG out of them, it'd do the trick. They're low maintenance... they're what we like to use on probes to other planets.

Think that's too much mass? Interestingly enough, its actually really efficient mass wise. To run a 10MW reactor for 50 years on typical nuclear power plant 3.5% enriched uranium would actually take about 10,000kg of Uranium in fuel, and that doesn't include the reactor at all, just the fuel.

Yes, there are self-contained reactor/generators that are truck transportable. 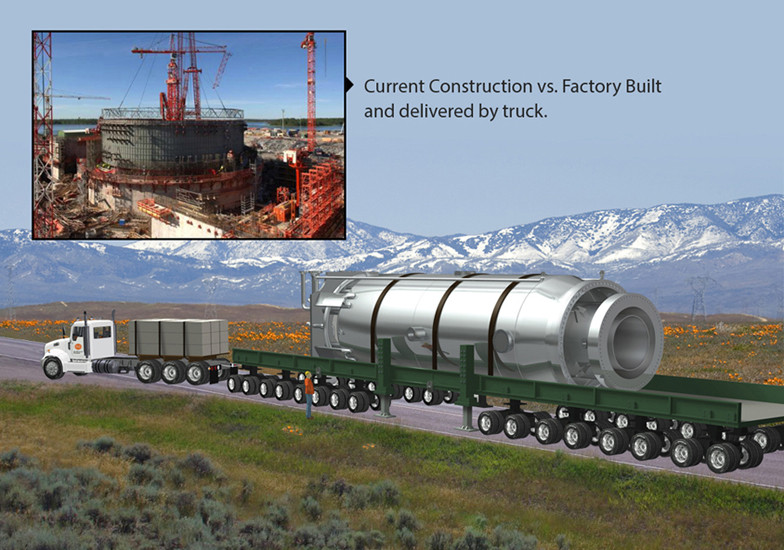 There is a company in Oregon making modular nuclear reactors that fit your requirements. These NuScale reactors can fit in the area you've requested. They're a 76' x 15' cylindrical containment vessel module containing both reactor and steam generator and can output greater than 50 MW.

An alternative might be either wind, solar or hydro-electric.

Solar cells are designed to run maintenance free for years. Note the little solar powered street signs you find about the place. The only maintenance required is an occasional wipe down.

Another low maintenance solution would be a wind turbine, though the power output would be unreliable. Modern wind turbines are designed to run for 3 years between services.

A hydroelectric plant likewise can be installed into any high velocity water source. A portable unit might weigh only a few pounds.

While this does not directly fulfill the parameters of your question, Stephen Baxter described a nuclear reactor which was "run" by neolithic people in his book "Manifold Space"

Essentially, it was a pile of natural enriched uranium (much like the "fossil reactors") with the neutron output moderated by charred poles being shoved into the pile by acolytes who were selected for punishment (one guess as to what happened to them). The flow of a natural underground stream was diverted through the pile of glowing rocks, and hot water and steam was the output from the cave.

Since no one understood what was actually happening, the people simply accepted that the Gods were providing hot water and steam, but there was a curse associated with it.

So nuclear technology is actually rather simple, assuming you don't care too much about the users and technical staff, and if your hero can get metallurgy up to snuff, it is theoretically possible to make a simple boiling water reactor in the middle ages, using graphite as a moderator (derived from charcoal: make sure there is a handy forest nearby when you are planning this). The reactor vessel should be enclosed in the dungeon of an abandoned castle (the stone walls will provide some shielding protection from the radiation), and condemned criminals will be needed to actually run the thing ("run in , pull this lever and run out. Your sentence is suspended, and here is a gold coin to take home with you...")

"Is there any portable(low maintenance, at least 10mw) reactors or energy producer that can be brought to another world?"

Nuclear technology is propagate-able. You can bring in the blueprints, the software, the fuel in small packages.

You will, however, need, HUGE (by definition, they are HEAVY and BIG) housing for the reactor. Spent fuel pools aren't easy to move around either. The steam mechanism is going to be colossal. Hyperbolic cooling towers... Exhaust chimneys...

It is NOT portable NOR low-maintenance.

Not the answer you're looking for? Browse other questions tagged science-based nuclear-power .

8
Economic feasibility of RTGs for base power
4
Fission vs. fusion as a heavily-restricted sci-fi power source
14
What would it take to make thorium a prominent energy source?
2
How big/powerful would your fusion reactor need to be to power the engines of a 32km long starship?
10
How to design a zero-g nuclear reactor?
3
Heat regulation in an asteroid base powered by a small nuclear reactor
22
Why would a nuclear powered spaceship needs to wait a few days before restarting the reactor engine?
3
How do you prove whether there are four elements?