I've got an idea about a creature that lives in a vacuum and uses some faculty to collect elements, integrating them into itself for growth. What would it look like? How would that work? I'm almost thinking like funguses with a collecting mycelium and fruiting bodies. For now, ignoreing what the thing would do in favor of how it would sustain itself and/or grab high-speed objects and eat them, like spaceships. My main characters end up running into one. It wants to eat them. Can this be done?

One way that it could spread is with something like a solar sail.
The sail would be very big, and spun from the material harvested from the asteroids; Namely carbon, nickle, iron, etc.

The solar sail would have a tether attached, which would be used to tow the lifeform around, and would look something like a dandelion seed.

It would also collect energy from the sun like a giant leaf or solar cell. This would help it to collect much more energy than it normally would get.

The solar sail would have fruiting bodies around the perimeter, which would act like weights and cause it to act like a weighted net. A little bit like this: 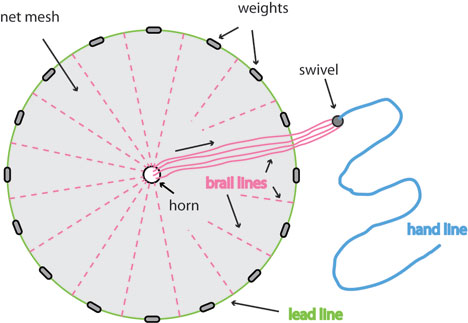 So when the sail encounters an object, the weights would cause it to wrap around the object, entombing it so it can be processed and digested. The main body of the life form would then use the tether line to pull itself to the new source of materials.

Grabbing things in space is difficult. Object's velocity vectors with respect to each other tend to be gargantuan. "Catching" something would probably not be in this creature's repertoire, especially since it doesn't need to catch them to continue to reproduce.

Your fruiting body might be a gossamer net cast out into the black of night. It might need to stretch for hundreds of kilometers in all directions. When another body crosses this net, and touches it, the fungus might be able to calculate its ballistic coefficients, and orchistrate a small spore pod to be accelerated into this new mass as a lower insertion velocity... low enough to be able to stick to the mass once it arrives.

From there, now it's just a matter of continuing to reproduce on this object, converting its mass until it is time to produce another fruiting body out of the material it collected from the other object.

Travelers on a space ship likely would not even notice their transit through the gossamer webs of the fruiting body, given how fragile they would be in order to maximize efficiency of material usage. The distances between asteroids is vast, even in the asteroid belt. Even with the great patience a fungi can muster, creating a good sized net will be essential. The traveler would simply continue on their way.

If stellar traffic has been around long enough for evolution to start to play a part, it might even develop a parasitic relationship with spaceships, switching to a different mode of infection if it identifies the materials that make a spaceship different than an asteroid.

You will have to forgive the lack of sources in this answer, as I am using references from a real book which I own (because I'm really that much of a nerd). Usually I'm much more link heavy in my answers.

The creature that I am using is something like a "cloud" or massive collection of gases, as referenced here. It is made up of small, organic "organs" within a larger, gaseous form. These organs are connected by electrical paths much like our own brain cells are connected to one another. The creature is essentially one giant brain, with the organs acting as cells, communicating. The cloud is made up of the same materials our own body is made up of, but on a much larger scale and in a gaseous form. These allow the brain to travel through the vacuum of space (with some minor handwavium).

This creature feeds on gaseous elements, hydrogen, oxygen, nitrogen, etc, all the gases that are found in abundance in the universe. In the short story it is based on, the creature sucks out needed replacement gases of a planet's atmosphere and leaves behind wastes (the story specifically puts Earth in danger of this creature). It can also eke out pockets of gas by heating up its own body (potentially hotter than a sun) to evaporate gases from asteroids. The creature is even capable of moving through space by thrusting out waste gases to propel it forward, giving it some maneuverability.

Should your spacecraft exude some kind of gaseous waste from its engines, the Black Cloud may be attracted to it, and begin to follow behind it, sucking up the trail of waste gas. It may at first only feed harmlessly on this waste gas. The cloud would then become hungrier, and become aware of an oxygen-rich environment within the craft. While your spacecraft might be fully sealed from gases, perhaps the cloud has some gases which are radioactive, damaging the spacecraft. Perhaps even the cloud can infiltrate the engines to try and get more sweet delicious gases, forcing your spacecraft to a halt. Perhaps the cloud can heat up its body to "smoke out" the gases within your spacecraft, mistaking it for some weird asteroid. And even the solid "organs" of the cloud can perhaps physically attack the ship, seeking to expose the gases within.

Possibilities may or may not be endless with this sort of set up.

Not the answer you're looking for? Browse other questions tagged reality-check biology spaceships or ask your own question.

14
Could someone reasonably clean off and return a child's toy retrieved from a radioactive fallout zone?
8
Could a life form evolve an organ for generating temperatures less than a degree Kelvin above absolute zero?
6
Foraging behavior of a forest slime
5
How quickly could a “shapeshifter” lose mass, realistically?
5
How to design a proper void whale?
1
Making a Predator For Wild Anklebiters
3
What type of infrastructure would be needed for an upside down city in a cave with a giant freshwater lake need if the the trade is a school/college?