What kind of reproduction methods would allow for an only male animal species to exist?

I was reading that there are certain species of starfish which fission made them in some locations to have a scarcity of female starfish and in other locations there are species which only male starfish were found. But I do not know if this species were completely made out of only males.

Do you think that some cellular division process could allow males to produce an egg cell and it divides and then the male release it and the egg develop to become a new animal much like some female lizard species can do? Or could they release a cell to the environment and this cell develop into a new organism much like what happens in spore formation?

Or to be more extreme could hermathrodite males exist and then they sel fertilize and reproduce without the need of any female help?

If an organism produces an egg, it is not male. It may not necessary be female either, but it's categorically not male. It's simply a matter of how those terms are defined.

As you note, a species can reproduce asexually, but then the members of that species cannot be called males.

I suspect that what you have in mind is something like: could a single-sex species exhibit what we'd consider exclusively masculine sexual dimorphism? Or, more plainly, could they all "seem" male? The answer is yes.

A real-world example: (some) poplars

Poplars are widely planted alongside urban and not-so-urban streets and avenues and roads. Here in Europe, a common sight is the pyramidal poplar:

The point being that it is not unusual at all for a cultivar to consist of all males. As I have said before, plants are aliens; their modes of propagation are not at all similar to what us animals do, and can always serve as real-world examples of exotic modes of reproduction.

Your male species is a klepton on a related normal species with females.

Males must mate with females of this other species... but fertilization with a klepton sperm always results in male offspring, of the klepton species. Maybe it triggers complete ejection of the mother's chromosomes, so all the males are clones, and there is no gene flow in either direction--or maybe it retains the mother's chromosomes, so there's gene flow into the klepton species, but not out, justifying still calling it a separate hybridizing species due to genetic isolation from the host population.

Exactly this kind of thing happens in real life among certain hybrid species complexes of fish. 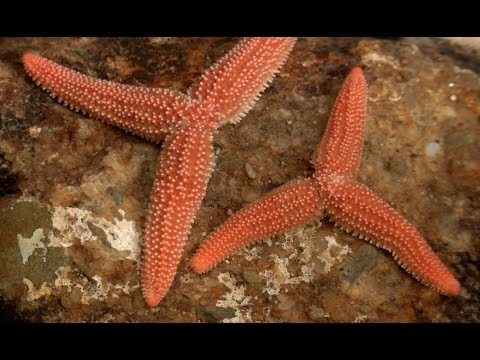 The species can reproduce sexually by clouds of eggs and sperm. They can also reproduce asexually by tearing off an arm and letting it grow into a new individual.

Since they cannot breed, Tthe males and females were essentially a different species. Due to sexual dimorphism (maybe one is bigger than the other) one of the genders outcompeted the other. Now only the "males" are left.

But how long can they survive if they can only clone themselves? Is it a matter of time before a new virus eradicates them all? Find out next week on Fission Quest!

If they seems male and they have male anatomy aren't they all males???

The spotted hyena has developed an unusual inversion of sexual dimorphism whereby the female is larger than the male and looks, externally, very male-like in both anatomy and behaviour. Female hyenas produce unusually high levels of androgen hormones, which appears to be an important part of their social ranking (higher androgen is produced by higher-ranking females). The androgen also impacts the development of their reproductive organs in a male-like fashion. This gives the spotted hyena the dubious accolade of being the only mammal with a worse birth process than humans.

So you could have a species where everyone looks and behaves male, while actually retaining the basic reproductive setup of egg and sperm.

Yeah problem here is classification. If a specie reproduces exclusively by budding or similar processes, it's asexual by our definition (also by default it's a species more susceptible to diseases and unfavorable environmental factors). If the species has only one sex that produces both gametes, they're also not male, but monoic or hermaphroditic. By definition a species must have a female for there to be a male, because by default females have the most important gamete, males mostly contributing to genetic material. Thunk of it like a factory that simply needs one final piece to fully start. A great example of this is how female komodo Dragons can give birth to normal males (and in this case exclusively males) through parthenogenesis, being the largest animal known to engage in such a type of reproduction. It also means that, if they could magically ignore inbreeding-related problems and issues associated with a lack of genetic diversity, komodo Dragons could basically exist for as long as there was a single fertile female around to kick-start the species back from extinction.

Also worthy to note that in terms of how we do things in biology and determining sex, external appearance is borderline meaningless. In hyenas for example the females have a pseudo penis and many traits usually associated with male animals, but are nonetheless females. Same can be said for human males with the Y chromosome and a female appearance.

So summing up: can a fully monoic exist? Yes, and they already do in our world, as do species which are capable of various degrees of both sexual and assexual reproduction and can favor one over the other depending on the situation they're in (by various degrees I mean whether they can or cannot rely exclusively on reproduction without a partner to survive in an ideal scenario where low genetic diversity aren't noteworthy). Can a male-only species exist though? Nope. They can't, and not because of biological limitations, but rather simply because of how we define this stuff.

If you still want them to be called males, the best solution is to change how your own world defines a male organism when compared to our own. Alternatively, if they were a species discovered by another species that does have 2 sexes, you can pull out the hyena card and have a species entirely composed of females that naturally evolved to have traits "more associated with males" (and I put this between commas because that's something more associated with us mammals but not universal. In many bird species, especially raptors such as harpy eagles, the female is usually the sex that's known to be bigger and more physically powerful rather than the male). This results in the species being mistaken for males despite being originally the female of the species, the males now long extinct as the species adapted reproduce exclusively through parthenogenesis (much like its rumored that hyenas were originally thought to be a monoic species, but that may be just a myth).

Not the answer you're looking for? Browse other questions tagged reality-check biology genetics reproduction .

14
What would be the cost of living in a country where only millionaires and billionaires are allowed to live?

6
Plausibility of seahorse-like marsupials where the male carries offspring?
8
Sexual pleasure in anemophile reproducing humanoids
17
Is a naturally all "male" species possible?
3
Physical causes of multiple births in humans?
3
How can a human male be made to produce sperm for another species?
4
Backwards-compatible Transhumanism: Is this feasible?
5
Reproduction via male gonad transfer
1
Genetic Plausibility of All-Male Half Giants and All-Female Witches